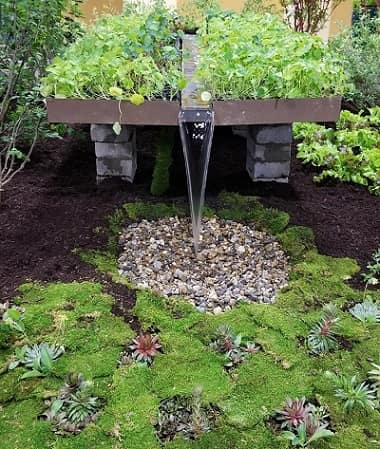 Minuteman High students in horticulture and plant science won five awards for an exhibit they created for the 2018 Boston Flower & Garden Show.

The Minuteman exhibit received the Massachusetts Association of Landscape Professionals Award, the Massachusetts Department of Agricultural Resources state award, an award for edible plant gardening, a $1,000 Premium Award for "a garden exhibit's use of forced plant material hardy to New England" and a blue ribbon in the amateur horticultural competition.

The Minuteman exhibit was also depicted in photos published in Boston Magazine. Scroll down here to see them >>

Setup of the exhibit was done by horticulture students Charles Lovett (Arlington), Nick DuLong and Antonio Aluia (both Medford) and Jeffrey Connell (Billerica).

Lovett, a sophomore, said of the experience in a March 31 news release: "It was a lot of fun to help assemble and satisfying to see how it all came together. I've never worked on a project like this before where I got to help with the design and work on it through the build stage."

Sarah Ard, Minuteman horticulture and plant science instructor, who supervised the students' work instructor Peter Kelleher, described the exhibit, the only one at the show done by high school students.

"It was an outdoor, lush space that invited you in to sample spring's bounty," Ard said in the release. "Lettuce and edible flowers were surrounded by native and nonnative woody landscape plants."

Aspects of the exhibit were designed by the sophomores, juniors and seniors. Kelleher installed the water feature with the juniors.

"All students in the program helped with plant production," Ard explained. "All edibles and bulbs were started from seeds planted for forcing [bulbs]."

All woody plant material was donated by SiteOne Landscape Supply in Hudson. David Ketchum, the manager, is the Minuteman program's advisory committee chair.

Minuteman welding instructor Gene Boyd said that his students created a table for the exhibit that featured a 10-foot-long trough for water to run off. "It worked great," he noted.

Asked how the students feel about participating in this event, Ard said they are always eager to be involved. "The students have asked each year to work on a Flower Show exhibit," she said. "It has become a challenge they look forward to. Being an old-time Boston event, the students take great pride in being part of Boston's history and showcasing their skills surrounded by companies that have a lot more people and resources, and even winning industry awards."

Exhibiting in the same environment with so many established professionals was another plus for the Minuteman students. Ard said that the Massachusetts Horticultural Society exhibit was near the Minuteman display. "We work with them throughout the year at their property in Wellesley. They always offer to help if we need it at the Flower Show and vice versa."

The event took place from March 14-18 at the Seaport World Trade Center. This year's theme was "Savor Spring."