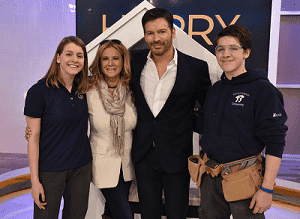 Much was at stake that day. Arlington resident Eisenheim and Merrick, of Lexington, represented Minuteman in front of an audience extending far beyond the borders of Massachusetts; they were also ambassadors for the numerous benefits of career and technical education.

Their adventure actually had its genesis last fall, when George Clement, Minuteman assistant principal for academic programs/admissions, was a guest on a program on WBZ Radio titled "Cindy Stumpo is Tough as Nails." The host is Stumpo, a successful Newton-based general contractor who specializes in luxury homes. The theme of the show, according to its producer, Tricia Bradley of Serious Fun Productions, was "Where Are All the Good, Reliable, Dependable Sub-Contractors?"

Some of them are being trained now at exceptional schools such as Minuteman, Clement pointed out. In fact, the subject of career and technical education and how its teachers and programs are closing the skills gap resonated strongly with both Stumpo and Bradley, leading to yet another broadcast. "The conversation and information was compelling," Bradley said in a March 21 news release, "so we had George back on with two students. We called that show, 'Cool Kids, Cool Jobs.'"

It did not even end there. Bradley recollected, "Cindy said something that drove me to pitch the idea of doing something about career and technical education to Harry Connick's TV show. Cindy said, 'We need to be as proud of saying, "My son the plumber, my daughter the electrician" as we are of saying, "my son the doctor, my daughter the lawyer."'"

The "Harry" show did green-light Bradley's proposal for a segment on career and technical education, Minuteman-style. It then fell to Clement to pinpoint the students who would appear on the program. He said he picked Eisenheim, a horticulture and plant science major, because she's a great student leader. Merrick, who is majoring in carpentry, excels in academics as well as his technical program, so he was an ideal choice, too.

That was just the first hurdle, though. All the red tape, preparation and organizing lay ahead of everyone involved -- teachers, administrators and of course, the students themselves. Eisenheim and Merrick would get only a minute and a half each to make their case for the importance of career and technical education.

"This was no small undertaking by the school," Bradley observed. Carpentry instructor Cliff Keirstead built a 5-foot-by-5-foot planter for Eisenheim, so she could demonstrate basic landscaping techniques to Connick and the audience. The day before the show taped, Feb. 2, Keirstead trucked the 150-pound planter to New York, along with a 250-pound shed Merrick constructed to show how a window is installed.

The students' teachers, including horticulture instructors Peter Kelleher and Sarah Ard and carpentry instructor Keirstead, played key roles in getting Merrick and Eisenheim prepped -- rehearsing what they would say on TV, figuring out the details of the demos they would do and making absolutely sure they were comfortable with everything that was about to happen.

Every potential glitch had to be dealt with. The students needed permission to travel out of state; at least one parent of each student had to accompany the Minuteman contingent on their trip to Manhattan; and concerns about the shed and planter being potential fire hazards had to be alleviated before they could be brought out on the stage for the taping.

Finally, the Minuteman group -- which included Superintendent Edward Bouquillon and his wife, Diana; Keirstead, Clement, Eisenheim's parents and Merrick's mother -- was ready to trek to Manhattan.

As it was Merrick's first time there and on a TV stage, understandably, he was a bit overwhelmed. "It was just so much to take in," he acknowledged. "It was a very new experience. The first time I saw the stage and the cameras, I was like, whoa."

Both he and Eisenheim adapted to the environment quickly. "It was out of my comfort zone," she said, "but it was a once-in-a-lifetime opportunity. I had to face my fears because I knew it would be good for me.

"I definitely gained confidence in myself," Eisenheim added. "I was just lucky to be chosen."

Clement was ecstatic about how well the students performed when the cameras began rolling. "They were incredible," he said.

"Being part of a TV production is a unique opportunity for these students," he explained. Both intend to go to college after they graduate from high school in 2019. "By showing their skills, they proved that Minuteman is the revolution in learning. Hopefully, it leads to more exposure about the good deeds and great education Minuteman provides."

People can watch the segment of "Harry" featuring the two Minuteman students by going to www.minuteman.org and clicking on Social Media on the home page. It is posted on the school’s Twitter and Facebook accounts.

Minuteman is an award-winning regional high school that integrates robust academic and career & technical learning to deliver a revolutionary competitive advantage to its students, expanding their opportunities for college and career success. Minuteman is as an accredited member of the New England Association of Schools & Colleges.