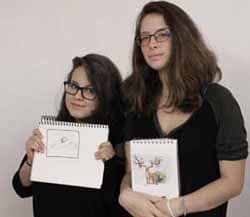 The Cary Memorial Library’s Teen Space will soon have a new mural adorning the wall, thanks to two industrious students from Minuteman High School.

Seniors Lucy Couet of Arlington and Mariana Torres-Roman of Watertown are in the design and visual communications program at Minuteman. They are interning at the library this fall to complete the mural they designed, said their teacher, Maria Galante.

"We're thrilled to be partnering with Minuteman High School students on this project," Jennifer Forgit, the library’s teen-services manager, said in an Oct. 30 news release. "From the outset of the Teen Room design project, we knew that it would be important to pay attention to the design and decor so that teens would feel at home. This is their space, and we want the look and the feel of the room to convey that. The mural will be the final piece to really personalize the space for Lexington teens.”

Couet and Torres-Roman are spending 18 hours a week at the library during the weeks when they would ordinarily be in their vocational program until the mural is completed, set for December.

It measures about 7 feet by 10 feet and will be done with paint, markers and pencils on canvas. The Cary Memorial Library Foundation is funding materials for the mural. The mural showcases themes such as diversity, acceptance and community in a fanciful and engaging manner.

"Getting to express these ideas and touching people’s emotions through art is a dream of mine, and I'm really happy it’s becoming a reality," said Torres-Roman. The students say they have benefited in numerous ways from doing this project.

"I expect to learn how to work in a creative but professional environment," Couet said. "I really hope to learn also how to commit to a deadline. I really hope to grow as a person and as a worker. I want to learn from this hands-on experience."

Forgit said the Minuteman students succeeded at their task - creating a striking piece of original art that conveys important messages. "Both artists’ sketches really captured what we were looking for," she said. "We are so lucky to be working with a pair of such talented, creative and thoughtful artists."

On Oct. 4, she presented her initial sketches for the mural -- as well as some prepared by Couet -- to the library’s Teen Advisory Board for their review.

"She was composed and professional, Forgit said.” She was not only open to ideas and suggestions from the group, but encouraged them to talk with her so that she could better understand their point of view."