First memorial vigil views addiction from those who suffer 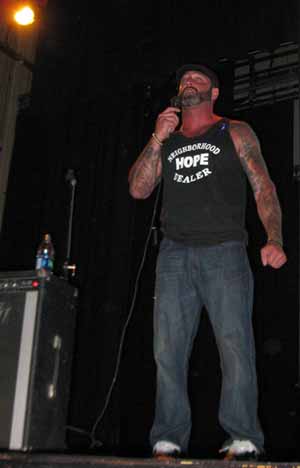 UPDATED, Sept. 3: A procession of pictures of those in Arlington lost to obsessions with drugs and alcohol clicked past on the screen as an estimated 60 people watched at Lowe Auditorium on Monday, Aug. 31.

Names, most underscored by birth and death dates, from near-children to older adults, were familiar to many. On the stage sat boxes of tissues. The audience, many weeping, held small round candles.

Arlington Overcoming Addiction held its first memorial vigil, an event that organizers hope will become an annual way to uncover what they say is a hidden scourge.

"Arlington has a blanket over it," said Amanda Fredo, who said she is the daughter of an alcoholic and a drug addict and wants to address the stigma of addiction.

"The stigma can only be erased through education," she said to applause. "We need to see that kids are getting high out of their parents' medicine cabinets."

Fredo was among three main speakers who told their personal stories about addiction in an event organized by Mike Duggan, an Arlington High graduate who founded Wicked Sober, which offers programs to aid addicts, and Thomas Caccavaro Jr.

The latter, whose name is familiar in part because of his dad's Arlington construction business, was by turns riveting and funny.

In a black T-shirt with "Hope, Not Dope" on the back, the tall, dark, much-tattooed Caccavaro rambled through what he called his "war stories." Their theme: "what I did to my family."

A high school grad -- "I don't know how" -- he went to college on a hockey scholarship "and played eight days." In Florida, he "fell in love" with cocaine -- and "it took my soul."

He said he tried to ruin his uncle and his dad, including his business, Caccavaro Construction, in the family since 1974.
His father is also a member of the Finance Committee, has served on the town building committee and ran for selectman in 2008.

The younger Caccavaro said he stole from his family; even so, his family supported him.

"Today I have no friends," he told the audience. "Tonight I am up here to save my life."

He bowed his head and cupped his eyes, weeping.

Nine months ago, he said he went to the Salvation Army, and its members "took me in when no one else did." He stayed in program and graduated a month ago.

"I never thought I'd chase down Chief Ryan," he said, referring to pursuing the police chief about holding the Aug. 31 program. "He was always chasing me," a line that led to laughter and applause.

The crowd was fully with him, and a female voice said, "That's why we love you."

"It's very special for me to be asked to do this.” My name is Thomas Caccavaro, and I'm an addict."

Louise Griffin, the third speaker, told about the morphine-overdose death of her son, Zachary Gys, on July 19, 2013. "I believe in hope, in miracles," she said. Proof? In Zachary's memory, a scholarship.

She asked for anyone at Lowe who has lost someone to an overdose to stand up. Many, many did.

"Their deaths cannot be in vain," adding: "where is the public outrage ... anger? It's not here."

She did not mean in the auditorium that night. There, much anger lay beneath the sadness.

She meant outside, among the general public, in the wider Arlington.

Inside, with candles lit, many of stage read many more names, each a victim of obsession.

With each name, Neil Duggan of the Arlington Fire Department struck a fire bell, each a doleful gong.

You could hear many weep.

Maggie Leon retched a rough, bluesy song written years ago: "Where has my brother gone?"

Then, on the screen, a sad parade of victims, remarkable for the range in ages represented.

Guitarist Beth Ford sang the 18th-century song written by a British sea captain who repented for his role in the slave trade: "Amazing Grace."

What lies behind memorial

Behind those behind the vigil is Chief Fred Ryan, who received warm applause as he was introduced. He said the hand should go to Duggan and Caccavaro.

He thanked those gathered, largely a white audience, for trusting the Arlington police and allowing such events to proceed. The evening runs counter to numerous images on national TV showing distrust of police.

Noting Selectman Joseph Curro in the audience, he referred to his June 29 appearance before the board, which occurred in response to recent overdoses and fatals. He said the numbers in 2015 appear to be doubling those recorded in 2014.

For his department, he said, "saving lives has always been a priority" over arrests. At the same time, he said, we still take investigations seriously.

He said identifying addicts provided his department with an opportunity to aid intervention. He referred to a briefing this year about a heroin dealer that included the names of the users.

He said he had asked "What are we doing with the names?" He was told: "Nothing."

That led to Arlington Community Training and Support (Arlington ACTS), which in turn led to the vigil.

Thanking state Rep. Sean Garballey, who was present, he noted a state Department of Mental Health grant that led to a social-work role for Officer Rebecca Wolfe, part of an outreach that tries to save lives with Narcan (Naloxone), which temporarily reverses the effects of opioids.

"We treat this as an illness," he said.

"I won't hear any officer referring to anyone as a junkie. If that occurs, he will be in my office."