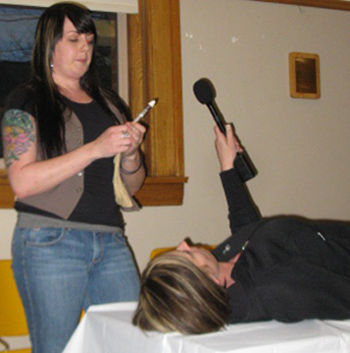 Drawn by news that four in Arlington have died of heroin overdoses since October, about 40 people witnessed a demonstration of Narcan, a temporary fix for OD victims.

Narcan is "not a silver bullet," and it does not always work, said Mary Wheeler, program director of Healthy Streets Outreach Program of Health Innovations, Lynn.

The presentation Thursday, April 30, at the Senior Center was scheduled after Arlington police officers expressed enthusiasm for Health Innovation's program and after what appeared to be an uptick in drug cases here,

Christine Bongiorno, town head of human services, told YourArlington April 25 that town police and fire responded to eight heroin-overdose calls in 2013 and eight to date in 2014. Of the four deaths, two were late last year and two were this year. She did not have ready access to a total of such cases in the past five years.

Bongiorno called the recent rise in heroin use locally, hitting people in their 20s and 30s, "alarming."

Police Chief Fred Ryan emphasized his department's support role, as opposed to a law-enforcement approach to drug issues. He called the latter a "very small piece of the pie," with a focus on prevention.

Walgreen's to sell in Mass.

In that light, Wheeler demonstrated how to use Narcan (Naloxone) an overdose victim.

Her presentation conversational and direct, Wheeler said that in Lynn nonfatal drug overdoses are rising while fatals are down because of Narcan training. Walgreen's plans to start selling the "opioid antagonist" in Massachusetts.

She called Narcan a "temporary solution," because its effects last only for a certain number of hours. The substance covers opiate receptors in the brain and prevents heroin from working -- for up to 45 minutes.

After Narcan is administered, the subject needs to be in a hospital for 24 hours, in part to prevent the victim from reaching the unrealistic conclusion that "all is OK now."

It isn't. Heroin remains in a victim's system, Wheeler said.

If a victim is not stabilized in a hospital, he or she might conclude that it's time to shoot up again. That surmise can lead to death.

After Wheeler described an overdose victim who had Narcan but died after taking more heroin, Ryan said that happened recently in Arlington.

"One of our [four] examples [of those who died since October] was exactly that," he said.

Wheeler spoke to an audience that included councilor and providers as well as those whose families touched by drug use. Wheeler, her right shoulder and arm swathed in a colorful tattoo, easily related.

During the demonstration, "Amy" (no last name given) lay on a table in front of the audience.

She adjusted Amy. Have the person lie flat and on one side, in case of vomiting.

Wheeler recounted some steps: Open the mouth, breathe in twice, back off, count to five and do it again

One approach to get a victim to respond involves breathing up his or her nose.

An overdose victim's jaw clenches. "Don't try to pry it open," she said.

To wake a victim up a bit, rub the breast bone.

Wheeler showed how to prepare Narcan nasal spray -- the drug can also be injected. One and half twists of the vial and shoot two cc's.

No effect on the victim? Try a second dose.

'Can't give too much'

"You can't give too much Narcan," she said, but if given a lot, the recipient an extremely annoyed or even violent reaction.

A touch of dry humor leavened the event. Wheeler has been asked whether Narcan will work if it's put in someone's dinner. It won't.

Among those in the audience was Woody Giessmann, the drummer (the Del Fuegos) who is the CEO and founder of Right Turn. The recovery center at 299 Broadway provides Narcan.

So did the town program at the Senior Center. After the presentation, members of the audience lined up to sign up and get it.

The Arlington native was a three-sport athlete who became addicted to painkiller and moved on to heroin. He founded the recovery service after choosing a better opiate -- hope.