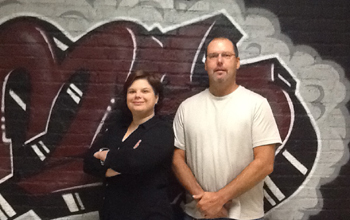 Gary Blanchette, a technology-engineering teacher at Ottoson Middle School, has been awarded a 2016 National Teacher Excellence Award from the International Technology and Engineering Educators Association.

This award is the fourth in a series for this Arlington Public Schools' program.

Blanchette received the 2015 MassTEC Teacher of the Year. Brandy Whitney, also a technology-engineering teacher at Ottoson Middle School, was nationally recognized with the 2015 Pasco STEM Educator Award. In addition, the Ottoson Technology Engineering program was voted the 2014 MassTEC Program of the Year.

Blanchette will be recognized at the annual ITEEA conference in Washington D.C., where he will take part in key discussions on the theme of "Collaborating to Build a Diverse STEM-Literate Society."

"It is such an honor to be recognized for this award by fellow technology and engineering educators," Blanchette said in a news release. "I love working with the kids, and I love the opportunity they have to learn and grow with upgraded instructional technology. Seeing their faces light up in class is reward enough, and it is so exciting to bring them exceptional learning opportunities."

Principal Timothy Ruggere said: "The recognition of top quality teachers like Gary Blanchette is so affirming. Our students are benefiting from outstanding teaching and up-to-date technology."
Superintendent Kathleen Bodie, reflecting on the series of awards that the middle school’s tech program has received, said: "Arlington has a technology-engineering treasure at the middle school.

"It has been built with the support of instructional technology investments made by the Town of Arlington and the Arlington Education Foundation’s Technology Initiative.
Arlington’s students are receiving a 21st century Technology Engineering education."

She informed the School Committee abpout the award Thursday, Feb. 25.

To learn more about the program at Ottoson, visit http://ottosonmiddleschoolteched.weebly.com/.

any in the crowd attending the Technology Showcase in May 2014 would not be surprised. Some of the projects on display were put together by students of Blanchette and Whitney. Blanchette said that evening that students were involved in "full-blown engineering."

This announcement was published Tuesday, March 1, 2016.