The school's building history reflects a piecework approach, a lack of overall, long-term design. The graphic below shows how. Follow the letters on the image from Google Earth: 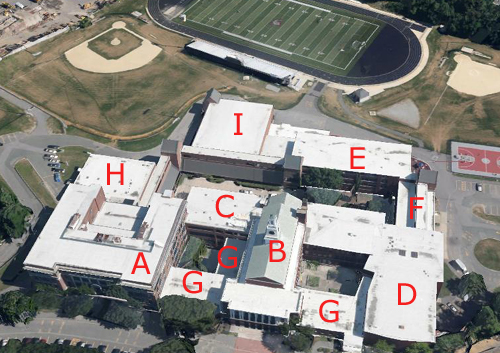 A. The original building, off Schouler Court, now called Fusco House, was built in 1914 and had some renovation in 1981.

B. The current main office was built 1938 and underwent some renovation in 1981.

C. The section called Collomb House was built 1938 and had some renovation in 1981.

E. Toward Peirce Field, Downs House was built 1964 and has had no significant renovation.

F. The Links Building, which connects Downs and Lowe, went up in 1981 has not been renovated.

G. Offices and the cafeteria were built 1960s.

UPDATED, Dec. 28: The executive director of the state School Building Authority says that Arlington High School will be recommended to receive funding in its effort to rebuild the 101-year-old facility.

First, according to an email from Superintendent Kathleen Bodie, the school is invited to participate in the grant program. The authority board, which convenes Jan. 27, must approve it.

"We will now definitely [know] on January 27 whether the high school project moves forward into the first stage of the process called the 'Eligibility Period,'" she wrote Tuesday. Dec. 22.

This is Arlington's second try to get state funding to rebuild the high school.

Below is information regarding what is involved in the "Eligibility Period." You can read about the entire process on the MSBA website.

"This is very good news for our high school and town!" she wrote. "I want to thank everyone who has contributed to this application. I also want to thank our Beacon Hill delegation for their advocacy."

"The feasibility study we would perform, if accepted by the MSBA, would be the first true indicator of such an estimate. That said, given the project costs of other high school projects in the region, the figure of $150,000 ... is not an unreasonable one."

Looking ahead to the Jan. 27 meeting, School Committee member Jennifer Susse noted Dec. 23, "A positive vote by the MSBA staff is usually honored by the board."

In a statement, she then describes what is to occur after Jan 27, the town has 270 days to:

* Form a School Building Committee and submit the names of the committee to the MSBA for approval;

* Secure funding from Town Meeting for a feasibility study;

* Execute a Feasibility Study Agreement, which establishes a process in which the town commits to work with the MSBA to secure an architect and other professionals to conduct a feasibility study.

"All this will takes time," she wrote. "The benefit is that it allows our school district to receive up to 55% reimbursement from the state. Throughout the process, there is ample opportunity for the public to comment on the various options identified by the feasibility study. All meetings are open to the public.

"The current thinking is that the high school will be completed by the fall of 2021."
She wrote that she believes the School Enrollment Task Force will be discussing the process in more detail at its 7 p.m. meeting Tuesday, Jan. 5, in the Lyons Hearing Room, second floor, Town Hall.

Emblematic of the building issues at the high school has been the 1970s-era elevator to the sixth floor, inoperable since August, was restored to service Dec. 14 -- but with a caution.

Dr. Matthew Janger, principal at Arlington High, told parents: "Please note the rest of the elevator, besides the new piston is still very old. This elevator should only be used by those who truly require it. There is a likelihood that if we overuse it, we will have a similar issue of a major part failing and it will again take time and money to repair it. The funds for this repair were in the 10s of thousands."

Arlington was turned down in its first attempt last December.

Bodie told the School Committee on Dec. 18, 2014, that the renewed effort would note the schools' sharp increase in enrollment as well as the fact that certain building issues must be addressed soon.

The Nor'easter in November that brought prolonged rain led to "significant leaks" that caused some ceilings to crumble in science classrooms, she said.

"We had a barrel on the sixth floor [catching leaks] near my office," she said.

The chief reason that AHS did not make the first-year cut, she said, was the number of applicants, many from cities. Those applications attract higher reimbursement rates than those for suburban districts, and that draws down the total pool of available building funds. 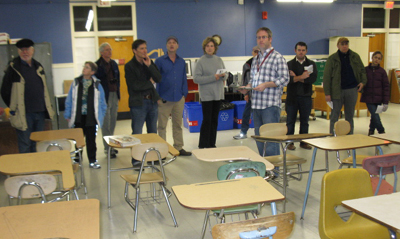 In an email to the high school community Dec. 16, 2014,  Janger reported news, which he called "disappointing."

The Dec. 12 letter informing Arlington from John McCarthy, the agency executive director, said the state had received 108 statements of interest about school-building projects from 72 districts.

"Given the needs we experience and the work we have done to document those needs," Janger wrote "this is hard news for many of us. It's important for us to remember the wonderful educational work and community that we have maintained, in spite of our aging facility."

Janger continued: "This is not altogether surprising news, as few schools appear to be accepted on their first request. We plan to update and resubmit our proposal this April. As for our timeline, this news moves the first possible start date for a construction project back to 2018."

In the meantime, he wrote, leaders will do the following at the high school:

"(1) Fix stuff now. We have made substantial and successful efforts in the past year to improve the cleanliness and maintenance of the high school building. In addition, we have been collecting information on the impact of the facilities on instruction. As we are going to be enjoying the high school's particular charms for a while longer, we will begin a new plan for ways we can improve our safety, comfort, and instructional environment over the coming 5 years.

"(2) Build our digital environment. Our new initiatives around creating technology centers and developing a 'bring your own device' model for the high school help us to provide a 21st-century education in spite of an early 20th century building. We will be adding new special use labs (digital media and science computing) in the next year. In addition, we will continue piloting the use of Chromebooks and IPads (adding 80-300 devices) with the goal of creating a technology rich "bring your own device" environment by 2016-17.

"(3) Create a maker culture. Our aging building gives us the opportunity to experiment and build both programs and stuff. Since reopening the woodshop as a maker space, many classes have built, experimented, and improved various corners of the building. Digital devices combined with real tools, allow students and teachers to become active creators of knowledge and real world impact. We will take advantage of the next few years to experiment and prototype for the future building.

"(4) Learn about future buildings. Now that we have an answer from MSBA for this year, our Future Building team will revisit our building vision, review our statement of interest application, and consider new schools for visits and information gathering. We need to continue to keep the interest and energy for a new high school alive for the next generation of Arlington students and the overall Arlington community. This is a long-term investment in the future of our town."

As the principal often is, he signed off in an upbeat way:

"That's it for now. We are ready for round two! Go Ponders!"

In an email to the community March 4, 2014, she wrote that the 100-year-old school has had no "major renovation since the late 1970s. Repairs have been made over the years as needed."

Last year the engineering firm On-site Insight was hired to evaluate all of the mechanical, electrical and infrastructure needs of the building. The report indicates that all of the high school's major systems need updating, she wrote.

In their 20-year schedule for repairs, the vast majority of the repairs would need to be completed in the first year. The complete report can be found on the district website here >>

Every 10 years, the high school participates in an accreditation process with the New England Association of Schools and Colleges (NEASC). In its letter dated Sept. 11, 2013, NEASC placed the high school on warning status for the state of its facilities.

In December, the architectural firm of HMFH, architects for the new Thompson Elementary School, was hired to analyze the programmatic needs of the high school, including the impact of the current building on teaching and learning.

Architect Lori Cowles presented her report to the School Committee on March 6, and to the Board of Selectmen on March 10.

In addition, she presented her report to parents and community members on March 12, in the auditorium of the high school.