Estimated 3,000 view AHS wings, and many interviewed are impressed 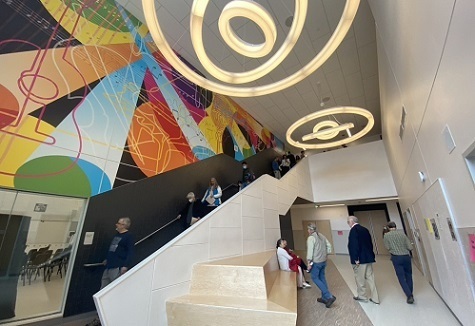 Phase I of the new Arlington High School opened its doors to the public for the first time Saturday April 30, and an estimated 3,000 attendees explored the new Performing Arts and STEAM (Science, Technology, Engineering, Arts and Mathematics) wings, which opened to students a month earlier.

Those taking the tour interviewed by YourArlington expressed near-unanimous appreciation for the abundance of light in the new building. Jenifer Tidwell and Rich Carreiro agreed that the, “natural light is one of the best features” of the new wings.

They were not alone in their sentiment. Eleven year old Zoe, compares the new wing to a museum, crediting the “really nice lighting and a lot of windows.”

In addition, attendee Joseph Curro Jr., the former Select Board and School Committee member, thought that the brightness would likely be “helpful to the learning experience.”

The lighting in the new building was definitely a hit -- but was it worth the price tag?

Is it worth the cost?

The cost of the overall building project is set at $290.4 million. With a state subsidy, the town's share is $204.8 million, and residents are paying an added tax.

Is the tax increase worth it?

Others were more skeptical. Brooks Harrelson said that he has “no way to know” but recognizes that, “so far, the quality looks good, and one has to pay for quality.”

Lynette Aznavourian echoes this: “After a few years we will see it’s worth it.”

In general, visitors agreed that so far the new building is shaping up to be a $290 million well spent.

Resident Rich Carreiro calls smart boards 'wicked cool' but wonders whether the town will 'have the will power to properly maintain them.'

Overall reports on the new building were gleaming, but some individuals had other considerations. Seventh grader Alyssa noted that she “honestly prefers whiteboards” over the new, high-tech, smart boards installed in the new wing.

Carreiro agrees with Alyssa when sharing his worries about keeping up maintenance of the boards. Carreiro recognizes that the boards are “wicked cool” but wonders whether the town will “have the will power to properly maintain them.”

Curro also hopes that the maintenance will be kept up, which he believes to “always [be] the key.”

Visitors with whom YourArlington spoke spent most of the four-hour tour period impressed with the new building.

Ten-year-old Olive stated that the building “is just amazing.”

Emily – who, like some others, declined to provide her last name -- cites the building as, “terrific.”

Zoe Cheimets pronounced the building “so pretty.” Aznavourian, who expressed a bittersweet feeling at the sight of the new building, was surprised to find that the experience was “phenomenal.”

Even Alex Cheimets, who wished for a swimming pool in the new facility, said that the building “looks stunning.”

The tours on a bright Saturday left an impressed group of tourists in its wake, embodied by 11-year-old Zoe who was “completely in shock” and “super excited” at the glimpse into the new building.

The estimated number who took the tour, 3,000, is based on a May 3 town news release.

“We are pleased so many residents of all ages came out to celebrate this milestone in the building of the new high school and have a chance to view this new state of the art facility,” said Town Manager Adam Chapdelaine, in the release. “I want to thank the Building Committee, project teams and volunteers for planning and hosting such a successful community event.”

Dr. Elizabeth C. Homan, superintendent, Arlington Public Schools, said: "We are grateful to the AHS administration, volunteers and the Building Committee for organizing this event and providing everyone with the opportunity to see this beautiful resource for the entire Arlington community."

The new wings opened to students Feb. 28, and the auditorium opened April 25

Among the 19 stops in the self-guided tour, attendees visited the new auditorium, chorus and band rooms, makerspace, science labs, discourse lab, and classrooms. Visitors also learned about sustainability features of the new building, which were a core component of the building’s design.

Representatives of HMFH Architects were on hand to share plans for phase 2 construction, which is already underway.

A virtual tour and photos, as well as Phase 2 construction information, are available at the project website at www.ahsbuilding.org.

This news summary by YourArlington intern Alisha Gandhi was published Wednesday, May 4, 2022. The information from Joan Roman, town public-information officer, was included.