A black teen known for “attitude” spoke out of turn and got a detention. A white teen with his own issues did, too, and faced no consequences. 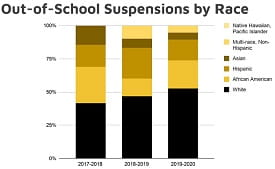 Was dealing discipline this way racist? Depending on the circumstances, it could be, and the Arlington Public Schools are taking steps to address it.

At a 90-minute virtual “community conversation” Wednesday, July 15, attended by 200 people at its height, a series of administrators took on “disproportionality” – that is the ongoing ways that shape how discipline is meted out fairly – or not.

Based on their comments and the numbers presented, the proportions between white and nonwhite students are narrowing.

From 2017 through 2020, the overall number of detentions and suspensions at the high school have declined.

See all of the number in the full presentation >>

“In general, the numbers are relatively low,” Arlington High Principal Matt Janger told the July 15 forum, allowing that even small incidents can lead to negative experiences. He said the data is from PowerSchool, the internal website where administrators post numbers. 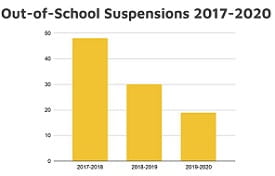 One reason for the narrowing numbers is the use of collaborative problem-solving since 2016.

The goal of this approach is to move away from traditional discipline, which calls for students to “do this or else.” Instead, administrators work with students to develop skills that point them in positive directions.

Probing on all sides

Part of the process involves sharpening understanding – on all sides: Student try to see what led them to act as they did, and staff seeks to know what is creating the disciplinary issue. “We examine our own biases,” Janger said.

Detentions, Janger admitted, have not been tracked as closely as other incidents. They amount to supervised study halls, makeup work and discussions with deans.

Improvements in the last three years include better IT support for reviewing and entering data, a partnership with Think:Kids and launching an antiracism working group, which black students in their lengthy statement (see sidebar, "Questions about numbers").

Providing the overview to the conversation was Superintendent Kathleen Bodie, who called the discussion “important” and said it has been “ongoing for many years …. We want students to know we are listening.

“Progress has been made in reducing disparities [between racial groups] -- it still exists.

“It is not enough to look at the numbers …. we are also looking at the cultures in our schools.”

That scrutiny involves the district's focus in recent years on how social-emotional issues affect education. “Our goal is equity, and we remain committed to it,” she said.

There are goals, and there are realities.

These hopes shape another aspect to matters raised in the July 11 page-one Globe story “In Arlington, Black voices challenge a white suburban school district to do better.” 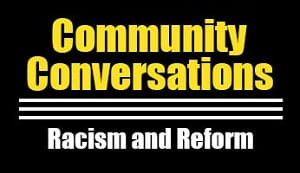 In a lengthy statement published July 16 on YourArlington, Arlington High black students and alums write: “Some unsettling truths: Our students of color make up 30% of the student population yet 50-60% of our suspensions.

“This is publicly posted online, and based on data that the Town of Arlington supplied, and contradicts the 2.1% percentages shared by the town in their recent refuting of the testimony courageously provided by former APS data specialist Jean Mike Remy ....”

The 2.1 percent cited is from this news story, which reports: “In the 2018-2019 school year, the 18 white students suspended represented 1.7 percent of the student population; the three black students represented 2.1 percent.”

Numbers in these cases can come from two sources – local and state – both may not agree.

Minor incidents leading to discipline (below the level of suspension), such as a detention, reprimand or some other loss of privileges (e.g., no recess) are not reported to the state. Those who work with local data report inconsistencies in recording disciplinary incidents in PowerSchool.

Some of the incidents are recorded on paper, and not retained past the end of the school year. The net result is that it is difficult to perform any kind of an analysis on detentions or other infractions that are not reported to the state.

Among them was the public charge by former data specialist Jean Mike Remy, who said Bodie urged him not to look too deeply into the discipline data he was assigned to report. Bodie has denied that, telling The Globe: “'We did delve into the data and have done so for many years,' spending thousands of hours and tens of thousands of dollars to address disparities.”

Remy told The Globe that he came forward to describe events from 2017 days before the town election because he was spurred by the international reaction following the death in police custody of George Floyd.

Remy has not said what data he might have uncovered in 2017, before he left his position. But public records show that he did provide the School Committee with a report on Dec. 6, 2016. See the report about suspension data in 2015-16 here >>

In general, suspensions were higher then, and the data was not broken down as much as it is now.

Roderick MacNeal, Jr., the assistant superintendent since 2017, told how the administration aims to improve a welcoming school culture. That includes changing Colonial Day, professional development (example: an annual day on race, equity and inclusion), book study on cultural diversity, added funding from the Arlington Education Foundation for equity, teaching about antiracism this summer and an equity/inclusion web page, which he created.

Facilitating the discussion was Jillian Harvey, the diversity, equity and inclusion coordinator for the town. Following the presentations, she expressed questions sent beforehand or during the event. Among them:

Q: Is restorative justice an option? How is it integrated?

Janger: “We make use of circles, which is similar to collaborative problem solving.”

Meringer agreed and said using it depends on the circumstances, whether something is done to larger community. He called it a “great philosophy.”

Q: How do you discipline in special-education cases?

Janger allowed that such students have more challenges. “The unsolved problems are us,” he said.

Q: What steps have been taken to include more diversity in hiring?

Bodie: “We have been dedicated to this ever since I have been superintendent [since 2008],” she said, noting 10 percent of all professional staff is a member of a minority group.

Despite efforts, she said, “We are all very challenged by this.”:

Q: As to school culture, are the effects of microaggressions addressed with training?

Pierre-Maxwell said she was attracted to Arlington because of its efforts. “I do think we are on the right track,” she said.

July 11, 2020: Amid a national reckoning, Black voices challenge a white suburban school district to do better

This news announcvement was published Sunday, July 12, 2020, and updated to a news summary July 21.