Following the lead of 16-year-old activist Greta Thunberg and students worldwide, the Thompson Green Team has been holding climate rallies regularly this fall on the first and third Fridays before school and monthly in Arlington during evening rush hour.

Joining the global call to action for international strike Dec. 6 during the U.N. Climate Conference, known as COP 25, Arlington Green Teams organized a day of climate events, including attending the Boston strikes.

On Friday, Dec. 13, the Arlington Green Teams plan to rally again on the front lawn of First Parish on Mass. Ave. and Pleasant from 4:30 to 6 p.m. Second Line Honk Band will join them. All are welcome. Participants will be wearing red because "the Earth is on Fire, and So Are WE!"

Elizabeth Rocco said, "We are creating a social tipping point that is inspiring rapid societal transformation to a just, sustainable world. I'm betting we will win, and organizing in Arlington to make sure of it."

"During COP 25, we need to send the bold message to world leaders that they must be prepared to work together to rapidly transition the global community to just, sustainable zero carbon societies," said Arlington parent and leader of the Thompson Green Team, Elizabeth Rocco. "And it's just as important that students, parents and really everyone work with town and state lawmakers to pass bold, comprehensive climate legislation this year."

After a short rally at Thompson, students, parents and allies traveled to the State House to meet lawmakers to ask them to champion climate legislation. In hand, they had a giant postcard with letters "#BeOurHero" for state Rep. Sean Garballey in appreciation of his climate leadership. 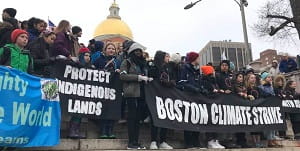 Arlington residents were among those at the State House on Dec. 6, 2019.

Garballey told the group how each has a role to play advocating for climate legislation to address the environmental challenges of our time. He said he hopes a bundle of climate bills pass this session.

John Anderson, a member of the First Parish Climate Action Working Group, went to the State House with the Arlington Green Teams and his 11-year-old son, Conard, whose poster read, "My future is in your hands. Take care of it."

He said he was grateful that Garballey and staff members from Rogers' and Friedman's offices spent time with young students and adult supporters. He explained a bit about how laws get made and why it’s so important to talk with your elected officials. "I'm here because I'm concerned about how the environment is going," he said. "The pollution is taking a big impact on how our society is going. I think we should stop the problem now."

I'm here because I'm concerned about how the environment is going. The pollution is taking a big impact on how our society is going. I think we should stop the problem now."

Rachel Oliveri, the Arlington Public School sustainability coordinator, called it "inspiring and motivating" to join the group and Garballey. "I was impressed by the students from Thompson, Gibbs and Ottoson who expressed the urgency of doing something about climate change.

"It is so important for our legislators to hear these youth voices and for us to continue to create opportunities for environmental education and action in the Arlington Public Schools."

Maggie Husak, a Thompson parent and organizer of the group, said, "We want a critical mass of students, parents, teachers and allies to visibly show our level of care and commitment to climate action, given the great significance of this particular moment, as "we are the first generation(s) to feel the effect of climate change and the last generation(s) who can do something about it" quoting President Obama."

After discussing climate bills, the Green Team then marched off to meet the Boston Climate Strike along Boylston, carrying the banner, "Small But Mighty Kids Change The World Arlington Green Teams."

While in the State House the Arlington Green Teams did not visit the governor's office to again ask for a response to their 123 climate-demand postcards delivered during Sept. 20 Boston Climate Strike. Parents said they have called the office multiple times and each time the staff reports that the response is in the mail.

Later that day, hundreds of young people from the Boston Climate Strike and the Sunrise Movement told Gov. Baker that Massachusetts youth wants bold, comprehensive climate legislation passed this session, and that they will keep coming back until the governor says he agrees. Hundreds of young people had a sit-in in front of the governor's office, and more than two dozen were arrested when they refused to leave.