Thompson parents step up after report of 'hate' graffiti at school 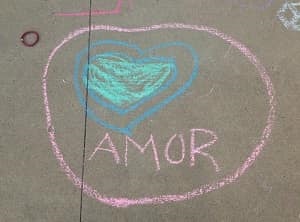 UPDATED, Dec. 8: Karen Donato, principal of the Thompson School, in an email Friday, Dec. 7, said graffiti was found in a school bathroom, and officials are calling it hate speech.

After school, parents and students responded with some graffiti of their own -- showing images of love, as shown above.

Donato wrote: "I am writing this morning to make you aware of an incident that occurred yesterday afternoon. Unfortunately, graffiti was found in one of the stalls of the bathrooms on the first floor. The graffiti contained swears, racial slurs, and has been removed. Based upon the nature of the language, we are treating this as hate speech.

"I have been in contact with district administration, and will be conducting a full investigation. The incident has also been reported to the Arlington Police, as well as the Human Rights Commission.

"I have also communicated with Thompson staff to make them aware of the incident, and will be working closely with them to gain further insight as to who may have been involved.

"At this time, I am not sure how many students viewed the graffiti that was written in the stall. If your child did view the graffiti, and is distressed by what he/she saw, please let their classroom teacher know. We will take our cues from the students, and support them as needed.

"As a community that prides itself on inclusivity and diversity, I am deeply saddened by this event. Hate speech has no place here at Thompson or any school.

"We continue to commit time and resources to the academic, social, and emotional well being of our students in an effort to foster a community of understanding and acceptance. I know I speak for the entire staff when I say we will continue to work together to ensure that all of our students feel welcome and safe at Thompson."

Capt. Richard Flynn, the department's public-information officer, told YourArlington that the incident was reported to the department last night.

"Our SRO [school resource officer] and members of the school department were at the Thompson this morning following up on the matter. Our SRO and school administrators will be investigating.

"APD SRO/Inspector will be filing a report. The matter remains under investigation."

"Immediately after school (or just before school is let out), let's chalk messages of love on the sidewalk! If you are picking up your kids, consider arriving 10 minutes early, so they leave the school to see these messages. Please bring chalk if you have it."

She gave permission to republish and told YourArlington that this is a Thompson Green Team response, which was quickly organized.

As she explained later, "within minutes of hearing about the hate graffiti at Thompson, she invited the Green Team club and other Thompson parents to join me in making 'love graffiti' outside the school. Several families made messages of love, peace, hospitality and friendship.

"Although the incident was not publicly announced in the school, one of the first graders whose class uses the vandalized bathrooms knew about the incident and joined us to make love graffiti.

"The Green Team club happily delayed our scheduled activities to spread love. As part of our mission statement, we affirm that we care about the Earth, the environment, all people and all living creatures and support community efforts to create a just and life sustaining society.

"Incidents like these give us opportunity to build community resilience and amplify messages of compassion, justice and peace that can ultimately promote community healing. Compassion is evolutionary and is stronger than our hurts and confusions."

May 5: 2018: SLURS: Police report reveals some facts, a source some others

This news  announcement was published Friday, Dec. 7, 2018, and updated to add police and parent comment. It was updated Dec. 8, to add a photo.

Zoning Board to hold 4 hearings Tuesday