UPDATED, Jan. 25: An estimated 200 people in Town Hall on Monday, Jan. 14, heard 25 among them ask questions in the second public forum about rebuilding Arlington High School.

They ranged from clear support to queries seeking clarification to stern comments about the projected $308 million cost.

In summary, no one explicitly objected to rebuilding the school, the first part of which was constructed in 1914, the last in 1981.

A key moment in the evening came when Carl Wagner, part of a group critical of the school's design and use of open space, asked those gathered: "How many support this project?" Many hands shot up. 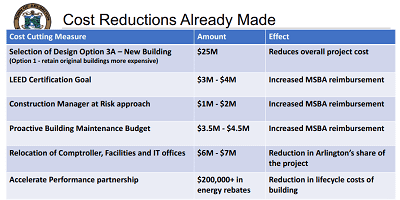 "I'm not," he said, listing a number of objections. He asked whether there will be a full traffic study of the proposed two-way access way to Mill and Grove streets behind the high school as well as an energy study. He said he fears that the trees near Mass. Ave. will die because of efforts to install geothermal.

Ryan Katofsky, who heads sustainability for the AHS project, said energy modeling is taking place, and he expects plenty of room between trees and tests wells.

Town Manager Adam Chapdelaine said he expects a study of traffic in the Mill Brook corridor.

Many of the questions came in the last half-hour of the two-hour forum, after project costs had been explained in a number of ways.

First, some key dates and a brief summary about where the projects stands.

Jeff Thielman, who chairs the building committee brought the public up to date about the project, spurred by rising enrollment and the 2013 threat of the loss of accreditation.

AHS Principal Matt Janger summarized effort by teachers and administrators since 2014 to shape an educational vision, aimed at driving how the school is rebuilt. That vision points to flexible design; a welcoming architecture, illustrated by the central common; two academic wings, which offer "a lot of freedom for students and are easy to supervise"; and an emphasis on digital tech and flexible maker spaces, allowing students to more actively create.

As to costs, Thielman noted steps the building committee has taken. One was deciding that renovation would drive the total price $25 million higher.

Another was adding factors under which the state credits Arlington: They include employing a construction manager at risk and aiming for LEED (green) certification, which takes up to $4 million from the cost.

Yet to be voted on is whether to move the preschool to the former Parmenter. A permanent move would require a separate debt-exclusion ballot question in June.

The state has capped the AHS project total at $308 million. If estimates come in higher, cuts would need to be made.

At 6 p.m. Tuesday, Jan. 22, the AHS Building Committee plans to vote about whether the Menotomy Preschool will remain in the high school or move to part of the former Parmenter School. See the Jan. 10 School Committee's discussion >>

At 6 p.m. Tuesday, Jan. 29, the AHS Building Committee meets to discuss a reconciliation of estimates.

At 5:30 p.m. Wednesday, Jan. 30, the School Committee meets in special session to discuss the reconciliation of costs.

Also shown was a cost-escalation chart, showing that the $166 million Newton North cost in 2010 would be $361 million today.

When taxes kick in

Those increases do not kick in until the town borrows funds. Chapdelaine said that would be during construction, between 2020 and 2025.

Patricia Worden, a Precinct 8 meeting member, continued her criticism of the current project, asking, "Why do you people think that parking is more important than children's’ athletics?" Read the full text here >>

Chris Loreti, a former Redevelopment Board member, who has objected to costs since summer, called information comparing construction costs " an example of cherry-picking." He said the AHS project is "now the third most expensive in the state."

Chapdelaine said the numbers are an apples-to-apples comparison of construction costs. "We're not trying to fool anyone," he said.

Kate Leary and Greg Christiana, two parents who were active in the successful 2016 debt exclusion campaign, urged volunteers to sign up.

Resident Bob Radochia asked about the tax impact of the June votes: "Can I pay it? .... a lot of people are upset." He said he would support "any effort to get it [the total project cost] down."

Alan Jones, a member of the town Finance Committee, asked, "Where do we see [$6 million] savings from moving town offices?
" He said he would be "happy to see that starting to go down."

Steve Revilak, a Precinct 1 meeting member, asked what lost accreditation might mean. Thielman, speaking as a former school administrator, said students feel the general impact, as it affects how scholarships are awarded.

A parent of a junior high school, expressed concern about those on fixed incomes and whether the town could find ways to help them.

Chapdelaine noted the aid to senior citizens now in place via the assessors' office, admitting they "only go so far." He pointed out that Concord and Sudbury had enacted local circuit breakers for property taxes aiding seniors.

Steve DeCourcey, a member of the Finance Committee who has taken out papers for Select Board, commended the committee on its planning. He recalls that, when he was a student during the last renovation, a gym had 12 classes in it.

One parent asked that if the June vote failed, what would be the outcome? Thielman said that, as in 1981, rebuilding would have to occur without state money.

"Some have suggested waiting a year to take vote," Thielman said. "That is not possible."

Forfeited would be an $100 million in state funds, he said, adding, "It is not a wise option .... The time to build is right now."

This announcement was published Saturday, Oct. 13, 2018, and changed to a news summary published Tuesday, Jan. 15, 2019. It was updated Jan. 16, to move Patricia Worden's full comments to Your View, the site's blog, and to include ACMi and presentation links. It was updated Jan. 25, to adjust the schedule reported in the sidebar.