AHS rebuild approved to move on to schematic design stage 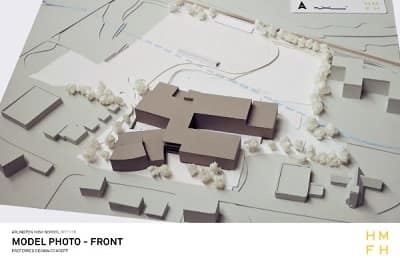 The AHS Building Committee met Tuesday. Sept. 4, sixth floor, AHS, and members of the group and others were present.

The state agency and the town will now look at possible options to replace Arlington High School, he wrote. The next step in the process aims to produce detailed designs for a potential project.

School Committee member Jennifer Susse, in an email Aug. 30, wrote that the state agency met last week and voted a favorable recommendation on Arlington’s preferred option, once called option 3A, which the AHS Building Committee approved in late June and affirmed July 10.

The vote mark the end of the feasibility stage, she wrote. Developed in the next stage will be many of the details of what the school will look like -- both inside and out.

"Remember, that the picture that is currently on the website is only a massing drawing that roughly indicates where programs and building elements will be located," she wrote. "The final design will be a lot more interesting, and will likely pay tribute to some of the design elements that people like in the current building.

"This is also the module that will develop the final scope, budget and schedule for the project. Previous numbers and timelines were estimates only."

The goal is to finish the schematic design next spring, she wrote, with the expectation of going to the voters in June for a debt exclusion to pay for the project.

A preliminary estimated puts the project cost at $308 million. With an estimated state reimbursement, the town would fund about $211 million

In an Aug. 29 afternoon news release, Superintendent Kathleen Bodie said that representatives of the town and its public schools attended the morning meeting.

The proposed new school, to be situated on the existing site, will replace the current structure. The project calls for a 415,400-square-foot facility for 1,755 students serving grades nine through 12.

The current high school is made up of an original 1914 building, with additions and renovations occurring in 1938, during the 1960s and in 1981. The building suffers from structural and exterior envelope deficiencies, and additional plant and accessibility issues. It is not suited to current educational practices and is also becoming overcrowded.

Jeff Thielman, AHS Building Committee chair and School Committee member, thanked the state agency board for its support of the project:

“We appreciate the thoughtful and considered study you made of our submission that has resulted in this positive vote. We are pleased that the work of so many in the district and Town of Arlington has resulted in the approval of a preferred option that will meet the future educational needs of Arlington students.”

Bodie expresses gratitude for the project and would like to recognize the strong teamwork of the Arlington High School Building Committee, HMFH Architects Inc., and Skanksa USA Building Inc.

The MSBA partners with Massachusetts communities to support the design and construction of educationally appropriate, flexible, sustainable and cost-effective public school facilities.

For information about Arlington’s preferred option and FAQs, click here >>