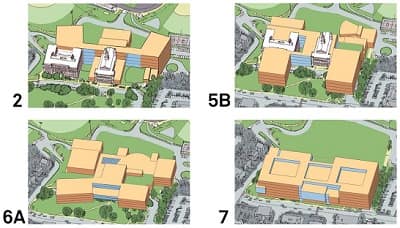 UPDATED, April 19: The Arlington High School Building Committee has chosen four design concepts to submit to the state, and a top town official has clarified the estimated projects costs.

After the committee reduced eight drawings from HMFH Architects to four on Tuesday, April 10, YourArlington asked Town Manager Adam Chapdelaine why the forecast costs rose from $200 million last December to more than $300 million this month.

"Thank you for writing about this important matter," he wrote April 12. "Costs have not risen by $100M since December since project estimates had never been developed or shared until last week.

"At the first public forum earlier this year, I was asked about potential cost for the project. I answered that while no estimates had been developed at that point, High School projects in nearby communities of a similar size and complexity were being estimated at costs well over $200M, with the Somerville High School project being estimated at $255M.

"Based on this, I suggested that there was the potential for the High School project to cost in excess of $200M, but that more study and analysis would be done to get a better understanding of project costs.

"In terms of the $300M cost, this is based on a range of estimates compiled by the project team (owner's project manager and architect) using the proposed square footage of each alternative multiplied by the estimated square-footage cost of construction based on rates currently being seen in the construction industry."

He added that this calculation was inflated to account for design costs, cost of furnishings and site costs.

"These estimates are not based on detailed design and cost estimation, because that work is yet to be performed."

Now that the building committee has narrowed the alternatives to four options, he wrote, the project team will begin further developing those concepts and also begin to develop more detailed cost estimates that will available for scrutiny by both the committee and the public. The manager concluded: "These are still very early days in the process, and there is much more information to be developed and considered."

Discussion at the April 10 meeting reiterated that project cost estimates for the four preliminary options range from $287,000 to $311,000.

In its Ponderings blog, the building website reports that, in choosing four designs, the committee used feedback from 100 residents at the April 4 community forum and from a SurveyMonkey questionnaire completed by nearly 500 residents.

How the concepts differ

The blog provides these details about the four concepts:

* Concept 2 retains historic structures and builds additions on the back of the complex. This option also improves interior circulation and way-finding and includes centrally located common areas such as the auditorium, cafeteria, gym and library.

* Concept 5b is a new idea recommended by the committee based on discussion on a new 5a option presented by HMFH Architects. This concept retains historic structures, builds new wings on the front lawn, providing potential "swing" space for phased construction), and is a more compact design while maintaining centrality of common areas.

* Concept 6a is an all-new construction option with an internal "spiral" layout. With wings on the front lawn, this option could also provide "swing" space during construction, as well as increased open space in the rear of the building.

* Concept 7 was also voted to further explore. While the committee was concerned about the appearance of a very large six-story building very close to Mass. Ave. with potential egress concerns, the committee decided that it would be important to explore an option that could be built separately with students remaining in the existing building during construction.

For more detail about each of these concepts including preliminary site maps and floor diagrams, click here >>

HMFH Architects plan to further refine each of the four concepts. Over the course of the next few months, HMFH will provide further details about floor plans, a traffic study, interior/exterior architectural feel and cost and construction timeline estimates.

The four selected concepts will be submitted to the Massachusetts School Building Authority (MSBA) as part of the Arlington's preliminary design program on April 25.

HMFH Architects will present further design details on the selected concepts to the committee in May and the June 4 community forum (7 to 9 p.m. at Town Hall).

The committee plans to select one preferred option, which will be submitted to the MSBA in July.

To learn more about the AHS project, and to receive updates by email, visit www.ahsbuilding.org or follow progress on Facebook >>  For specific information about the feasibility phase, read the site's blog >>