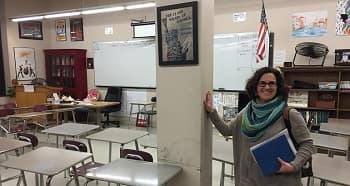 Freshman Avery Spellmeyer took a group of 10 people on a tour of Arlington High School on March 5, noting columns in classrooms that obstructed a view of the teacher, dark hallways with worn floors and cracked and peeling walls.

The group saw a cafeteria designed for 375 students in a building that houses 1,320; a science classroom with outdated equipment and an auditorium that does not meet requirements for accessibility for the disabled.

"It's a dark and nasty building," Spellmeyer said, "but the school itself is good."

The group was among an estimated 100 people who went up and down some of the two dozen staircases in a building that began its life in 1914, with six buildings added chockablock from 1930 to 1980. The tours were not for those faint of breath or leg muscles, as the adults got to experience what students go through to move from class to class. After getting an idea of what the high school is like, most of those who took tours sat down in Old Hall to talk about what a new school could become.

The gathering was the third public forum held as part of a feasibility study for the Arlington High School building project. The town has been invited into the Massachusetts School Building Authority (MSBA) process for the renovation or construction of the high school.

Debt exclusion 2019; if successful, construction the next year

Jeff Thielman, chair of the School Committee and chair of the High School Building Committee, told the audience the public will be voting on a debt exclusion to pay for the building, which could be in June 2019. The cost has not yet been determined, and the MSBA is expected to pay for part of the building. If voters approve the the debt exclusion, construction will begin in 2020 and end in 2023 or 2024.

The tour groups heard from David Stephen of New Vista, a Boston-based consulting company that works on the design process with school districts to develop and meet educational goals. The basic question, he said, is, "How can we best meet the goals and needs of the school in the most practical way as well as providing the town with a facility that can support it for decades to come?"

"Schools haven't changed all that much in 100 years," he said. "We have corridors lined with lockers, and an auditorium, gym and cafeteria. But we are starting to think about shaking that up so we share lots of ideas about what's possible and see what resonates with people."

Stephen said that with fully wired environments, "basically every square inch of a school can be used ... if we can wire every space in a school we can create a much more flexible and dynamic environment."

Stephen said a classroom neighborhood would be a smaller unit with the building that helps forge a sense of identity. It can be created by connecting classrooms and providing a learning commons. While traditional schools are organized by disciplines, some, he said, are looking at ways to cross disciplines when students are working on problem or project-based work.

A cafeteria is used only for part of the day, he noted, yet it can become a fully wired environment and be used for other purposes. Cafeterias can also be smaller and distributed throughout a building to maintain a sense of being in a smaller school. Another design feature might be quiet spaces, so that there are nooks and places for students who may be feeling overwhelmed or just want a place to be on their own.

Still another feature is what Stephen called "way-finding"; namely, making sure it's easy to find one's way around the building that feels both friendly and intuitive.

Stephen said sustainability will be a major goal both for the environment and for educational purposes, with panels on a wall explaining the building's energy use so that students can see how the building operates. He said the building could also be used for community activities with academic areas kept separate.

He asked the audience which of these ideas resonated with them. Justine Bloch, a parent who is the librarian at the Bishop and Hardy schools, liked the idea of a building being open to both community groups and young people during off-school hours. "I love the idea that there could be an open, supervised place for kids to come. Right now, there's no place for them that's safe for them to hang out."

One audience member asked about security. Stephen said that security is "unfortunately on everybody's mind, and that has a lot to do with a gate-keeping mechanism at the school. Where are the entries? Who is at those points? How do we limit them so people are buzzed through a vestibule that is highly visible. We want to balance that out so that the school doesn't feel like a jail but is warm and welcoming."

The next forum is scheduled for Wednesday, April 4, from 7 to 9 p.m. at Town Hall.

To learn more about the AHS project, and to receive updates by email, visit www.ahsbuilding.org or follow progress on Facebook >>  For specific information about the feasibility phase, read the site's blog >>