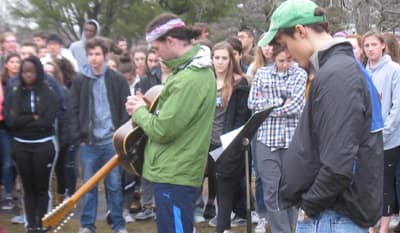 UPDATED, March 8: Hundreds of students at Arlington High School joined a rally Wednesday, March 7, in concert with those at schools in Medford, Somerville and Cambridge to remember the 17 murdered in Parkland, Fla., and call for legislation to curb guns.

The event, led by leaders AHS Young Democrats Club, was a separate effort from the planned #NeverAgain event set for March 14.

A tide of students, and some faculty, rolled through the school's main entrance before 8:17 a.m., the time that the Feb. 14 Florida massacre began. The swelling throng hesitated on the steps and then washed across the front lawn, amid intermittent snow, some chanting "Enough is enough."

Sophomore Griffin Gould, an organizer of the event, took the bullhorn and announced a period of silence to remember those lost to gun violence -- which turned into lengthy, reflective quiet, with the faces of many suggesting a pallor of sadness.

Ian Miller, a senior, with a guitar slung over his shoulder, spoke: "What can you say?" Instead of the facts of continuing gun violence in America, which he said are known, "I'll give you what you don't have, and that's what I feel."

He told a story of sitting in his room and looking at a poster that is meant to inspire -- "Seize the moment," or some such sentiment. He thought of those in Florida who will no longer see posters like that. "That's hurts," he said.

With a nod to his guitar, he said, "I usually sing a song." In this case, with the bullhorn's help, he read the words of Bruce Springsteen's "You're Missing." The songs ends this way:

God's drifting in heaven, devil's in the mailbox
I got dust on my shoes, nothing but teardrops

These words addressed his pain, and after their resonance fell on all assembled, he returned to the rally's message.

He said he would like to see a ban on semiautomatic weapons. "Taking away a gun is not as terrible as taking away a life,” he said to applause.

Gould expressed pride in the Arlington community for its support of student efforts, saying that connected events that day in the Boston area were part of what he hopes will be a national movement, what he called "a great mobilization of American youth."

In addition to the March 14 event at AHS, students plan to go to the State House that day to support further gun legislation and, after that, be part of the March 24 "March for Our Lives" rallies, which includes Boston.

Isabella Dray, a Student Council member who is among those organizing the March 14 visibility, was part of the crowd March 7 and was happy to see that it supports the latter event.

Before the March 7 rally, Gould said he is president of the Young Democrats club as well as an active member of the Massachusetts High School Democrats. He is not a member of the student Council.

He said March 14 will also mark the beginning of a 10-week legislative program at AHS led by the Young Democrats club targeting legislators who have remained inactive for too long.

This news summary was published Wednesday, March 7, 2018, and updated to correct the first name of a student. Updated March 8, to add a Cambridge Day link.