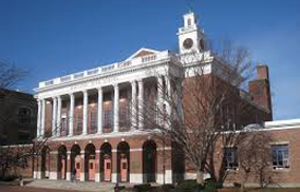 How Arlington High School, part of it built in 1914, looks today.

Skanska USA Building Inc., approved by the state as the owner's project manager for a reshaped Arlington High School, has built projects around the world as well as in our back yard -- the company manages the Winchester High School renovation/addition.

Jeff Thielman, School Committee chair and chair of the Arlington High School Building Committee, expressed his satisfaction with this approval in an Aug. 10 news release: "This is a big step forward in the process of making major building improvements at Arlington High School. We look forward to a productive and efficient partnership with Skanska."

YourArlington reported in mid-June that the building committee's choice was Skanska. The state School Building Authority (MSBA) announced approval of the pick in a July 12 letter.

The high school, whose earliest structures were built in 1914, faces extensive renovation or rebuilding -- a key decision still to be made. The project is expected to be completed in September 2022.

Skanska will help the AHS Building Committee to suggest architects for the project. The committee is next scheduled to meet at 6 p.m. Tuesday, Sept. 5, in the School Committee Room, sixth floor, Arlington High.

The final designer faces approval by the 13-member MSBA Designer Selection Panel, three of them from Arlington. Once chosen, the architect will meet with the full AHS Building Committee to discuss project expectations. The architect could be selected by October.

A community meeting will be held at some point in the fall, possibly in November, offering residents an opportunity to learn about the architect's view of the project.

A tricky matter for the construction timeline is this: The new high school will be built where the existing building is, and it will be done in phases. That is, parts of the building will be taken down one at a time.

Because soil below a cap under Peirce Field, behind AHS, is contaminated, the design is limited to the building's current, sprawling footprint. Starting 16 years ago, following an agreement from industries once sited where the DPW Yard is now, much contaminated soil was removed and that below a certain level was capped, giving the public by 2005 a remade Peirce Field.

To effect a renovation or a rebuild, high school space will face constraints. Affected will be parking and classroom as the builder tries minimize the impact on education.

For its designs, Skanska plans to create a budget outlining the parts of the project that are eligible or ineligible for MSBA funding. The state and town will fund eligible costs according a funding agreement.

Looking ahead to project funding, official expect a vote on a debt-exclusion override to occur in the spring of 2019.

Communications Committee Chair Amy Speare has said that the committee has bought the web domain ahsbuilding.org, and has hired a designer to give shape to the site. She said the site is expected to go live with information about the project by early September.

In July, the committee compiled a series of frequently asked questions about the project. See it here >>

The state approval also confirmed the key personnel and consultants included in the proposal that Skanska USA Building submitted to the Town of Arlington. The town used the required qualifications-based selection process that complies with Massachusetts law.

Skanska USA Building has deep experience in institutional projects, including municipal, K-12 and higher-education construction. It was involved in Lowell High School and Minuteman Career and Technical High School. In Winchester, Skanska is completing the high school renovation and addition for the opening of school next month.

The MSBA partners with Massachusetts communities to support the design and construction of educationally appropriate, flexible, sustainable and cost-effective public school facilities. Since its 2004 inception, the authority has made more than $12.4 billion in reimbursements for school construction projects. The rebuild of six of seven town elementary schools took place with funding from an early state school agency.