This is a story about just one corner of Arlington -- one whose residents have overcome numerous roadblocks with a laserlike aim to make its streets safer.

Some obstacles include those facing anyone who lives along the estimated 25 miles of private way in town (there are 100 miles of public ways). Other concerns occurred within the neighbors' own ranks.To date, all were overcome.

This month, the Corner Committee takes key steps forward in a three-year effort to improve the safety of an intersection that many in town use -- where Fountain Avenue, Cedar Street and Hawthorne Avenue merge -- not far from an Arlington landmark, the Park Avenue water tower.

"We're all in this so no one gets hurt," said Jen Rothenberg, who has been toiling on this issue since 2010.

By late August, work is expected to get underway on the measures aimed at narrowing the intersection and calming traffic. 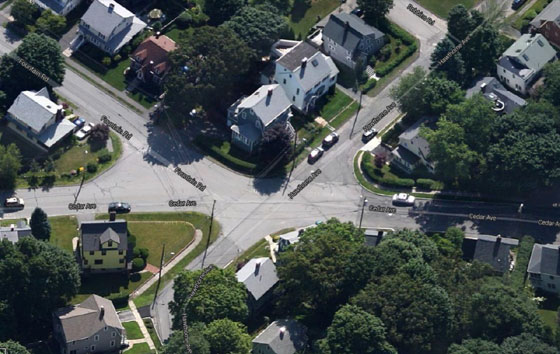 Group has long found ways to push on

The need for the extra amount nearly stopped the project, but this group of persistent neighbors found ways to push on.

That's how it's been from the beginning.

"For me, a benefit of working on this project has been the opportunity to meet my neighbors," said Dan Hartmann. "Great people who genuinely care about the community.

"My wife and I moved to Arlington in 2007. Between the two of us, we'd lived previously in eight states -- in just about every part of the country. In Arlington, we feel like we've found our permanent home because it is such a supportive community."

In an hourlong interview, which included the claps of summer thunder, Rothenberg talked about what sparked initial concern, in the spring of 2010.

Youngsters walking to school through the expansive intersection followed a pattern: At 7:45 a.m., as many as 40 Ottoson students would gather and walk down Fountain. At 8, a younger group would head the other way, up Hawthorne, to Brackett.

"Traffic was heavy and fast that time of day," she said.

Her response was protective, immediate, shouting at the drivers: "Slow down!"

The intersection is so large that works two ways -- it gives drivers time to brake, but it also encourages the feeling that speeding is all right.

That spring, she began calling Mike Rademacher, then the town engineer, and made a key ally. She said he worked with her on the issue "steadily." She said he agreed the intersection was dangerous and was willing to take steps needed to help, which he did on his own time.

As was clear early on, the Town of Arlington would not improve the intersection, because it was private way, so neighbors would have to.

No background in transportation

In 2011, Hartmann came on board. Rothenberg called him "a breath of fresh air." A biotech instrumentation research-and-development engineer, he works in a field that has nothing to do with roads.

Among other steps, they contacted the Tower Heights Association, whose neighborhood area includes the intersection. Its members declined to be involved. The group's focus at the time was maintenance, not renovation, Rothenberg said.

Others signed on. A key player was Jeff Maxtutis of the Transportation Advisory Committee (TAC). With Rademacher, he would attend evening meetings and helped draw up three design options.

Those plans were refined -- dealing with such issues as stop signs (where to place them?), the need to narrow the intersection to increase visibility, the need for crosswalks with reflective paint.

In April 2012, the committee reached out to its neighbors and beyond, including the Tower Association, and presented three designs. Discussed were a rotary, planting and five-way stop. The meeting minutes reflect the detail involved.

A follow-up meeting in May documents the group's steady progress. The number of participants were increasing, averaging about 25 per meeting.

The heart of the process

For Rothenberg, the process has been energizing.

"I like meeting new people ... seeing what people's perceptions are and working toward a solution," the New Jersey native said with enthusiasm.

"A lot [of the issue] came down to dimensions," she said. The intersection was too small for a rotary, failing to allow enough room for the turning radiuses needed for emergency vehicles. Speed bumps were ruled out.

"I don't know anything about transportation," she said. Her background is in social work. She said she was "so grateful to have [Rademacher and Maxtutis] on my side .... We could get responses [to technical issues] on the spot .... Their expertise helped make the project go forward."

As is clear from the May 2012 minutes, those involved aimed high: They hoped to have the changes in place by the time school started, that September.

How some roadblocks were overcome

A year later, that hope may be realized. What happened in the meantime?

The group needed to reach its fund-raising goal, and so sent out and appeal letter last fall to about 1,100 people in Precincts 12, 14 and 16. An estimated 150 families responded, resulting in just over the $19,000 goal.

As for the latter, one of the Corner Committee neighbors wanted to know if residents modify the roads, would they be liable following an accident at the intersection?

The FAQ on the group's website quotes Town Counsel Juliana Rice: "You will certainly be no more liable than you are right now!"

Other group members weren't so sure. Some said we might be more liable if we made changes without getting a professional engineer to sign and stamp official drawings.

To address this concern, the group hired a professional engineering firm, Design Consultants Inc. of
Somerville, to sign off on the plan, and the neighbor who raised the issue is now a supporter.

As to handicap access, the group learned this summer that it would have to put in sidewalks and ramps after believing it would not have to do that, because the intersection is private way. Despite its nonpublic status, the location still must comply with state law.

Costs of new work kept down

At first, the cost of the new work, estimated at $20,000, appeared to stop the whole effort in its tracks, Rothenberg said.

To the rescue came Hartmann, the group's contractor, Ralph DePremio; and professional engineer Jason Sobel. They worked together to pare costs to $4,000, the amount needed in the last fund-raiser.

They have "been amazing," Hartmann said, "-- willing to work with us to keep costs down, alerting us to necessary design changes, and sticking with us as we raised funds and sorted everything out. It's been a collaborative effort, and we thank everybody who's been involved."

The group is confident it can raise the amount and has told the contractor to begin work by Aug. 25.

A delay could come if the group needs to have a permit in connection with a water main affecting their neighborhood that the Massachusetts Water Resources Authority plans to replace in 2014.

Part of the confidence lies in the fact that an anonymous donor is willing to match $500 gifts. That includes those who previous gave lesser amounts -- for example, $200 -- if they are willing to add the balance to equal $500.

As for giving, she noted: "Many are on a fixed income. These people care strongly about the safety of their neighbors."

DO YOU WANT TO GIVE?

Please mails any donations to:

Steve Berczuk For town housing, move beyond critique to solutions
23 January 2022
My comment about facts was more about the followup analysis, rather than whether the report met state guidelines, and I didn't check on the state rules for the draft report. In M. Seltzer's article, ...
Don Seltzer For town housing, move beyond critique to solutions
22 January 2022
Mr. Berczuk accuses me of not getting the facts straight when I wrote that the draft Plan does not meet the State requirement "At a minimum, the Plan must examine...The capacity of the infrastructure ...
Bob Sprague Letters: Emailing Advocate? Copy it here
17 January 2022
Let the public know with a letter to the editor. For details, see https://www.yourarlington.com/easyblog/entry/70-letters/2631-yourletters-20Bob Sprague