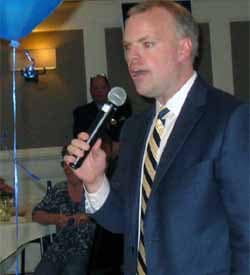 Rep. Sean Garballey at kickoff in May for Senate bid. / Bob Sprague photo

Rep. Sean Garballey has offered a general denial to a Fox 25 report that includes him among state legislators who allegedly collected tax dollars for Beacon Hill commutes they did not make.

The Democrat told YourArlington in a statement that he represents a district close to the State House -- Arlington and West Medford -- and has no district office. Instead, he commutes "back and forth almost every single day. I also use my State House office on weekends and weeknights, working on policy matters and constituent cases."

Fox 25's Eric Rasmussen reported Nov. 1 that several legislators had "cheated" the system after the reporter spent Thanksgiving last year at the State House taking attendance on every lawmaker who showed up and later checking that against their daily commuting logs.

25 Investigates said it found state representatives Garballey of Arlington, Paul McMurtry of Dedham and John Mahoney of Worcester all collected tax dollars for commutes to the State House that, Fox 25 said, they never made under the per-diem program.

"No one has charged taxpayers for more days traveling to the State House in the last two years" than Garballey, 25 Investigates reported, adding he received more than $4,000 in commuting expenses at a tag of $10 per day.

Fox 25 reported that Garballey said he was at the State House all five days the week of Thanksgiving 2016. The report said staff for the Arlington representative told Fox he was "in district" that Monday and on that Black Friday the representative's office was locked.

Before  the reimbursement ended, it paid lawmakers for every day they drove from their homes to the State House, amounts ranging from $10 to $100 a day, based on how far they had to travel.

More than $1 million for commutes have been reimbursed since 2014, Fox reported.

On Monday, Nov. 6, he responded in an email to a Nov. 1 request for comment from YourArlington: "Legislators must be held to the highest of ethical standards. I strongly believe the media plays an essential role in holding elected and appointed leaders accountable.

"It has been the honor of my life to serve the people of Arlington and Medford in the House of Representatives, and I will never take that confidence for granted."

Apart from commuting "almost every single day," he wrote, "I also use my State House office on weekends and weeknights, working on policy matters and constituent cases."

The popular representative, 32, who has held office since 2008, after serving on the School Committee, has been asked to respond further.

Unlike Dedham lawmaker McMurtry, who Fox reported fled when asked questions about State House attendance a year ago, Garballey made clear his access to constituents. To reach him, he wrote, he included numbers for his cell phone (781-859-7781) and office (617-722-2090).

"Constituents are also encouraged to visit me at my State House office in Room 540, or at one of my weekly office hours," he wrote.

In response to the Fox 25 report, state Treasurer Deborah Goldberg says she will move to recoup $8,000 paid out to two dozen lawmakers who continued to charge taxpayers for per-diem commuting costs for weeks after the Legislature phased the perk out last January.

Some lawmakers told the station they didn't realize the reimbursements had ended, and most contacted said they would voluntarily repay any funds they received in error.

The database accompanying the Fox report shows no per-diem reimbursements for Garballey in 2017. See that database dating to 2014 >>