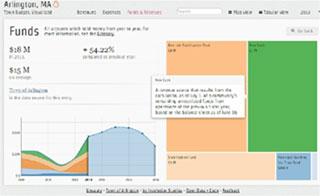 Termed a first of its kind

What if Arlington taxpayers could see online, in real time, how the town spends their money?
A start-up company nearly across from Town Hall is on its way to realizing that dream.

The effort by Involution Studios, at 661 Mass. Ave., and the town remains a work in progress, but it is far enough along for the public to see it -- and for the town to announce it. That occurred Monday, Oct. 7, when Town Manager Adam Chapdelaine and analyst Michael Bouton described it publicly to the Board of Selectmen.

Chapdelaine says it is the first known visual representation of a municipal budget of this kind.

"Increasing transparency and accessibility to financial information has long been a goal for the town," Chapdelaine said. "We hope this new feature will encourage users to learn more about Town finances and be more engaged in the annual budget discourse."

The first public glimpse occurred on Town Day, Sept. 21. In a dark Town Hall Auditorium that day, former Selectwoman Annie LaCourt sat at a laptop. Projected on the screen were pages from what those involved are calling Arlington's Visual Budget. See it here >>

Peter Howard, secretary of the town Finance Committee, asked questions, as Alan Jones, also of the Fincom, looked on.

"Can I see the structural deficit?" Howard asked, referring to an ongoing financial issue the town faces in which amounts paid out eventually outstrip available revenues. Projected figures on that deficit show the town in a $7 million hole in fiscal 2019.

LaCourt clicked through various scenarios as music from the Arlington High School Jazz Band blared from the stage outside. If Howard did not see a graphic representation of the deficit that day, he saw lots of current information that a taxpayer might want to know.

See how your taxes are spent

For example, those at the demonstration saw where their taxes go at the Arlington Visual Budget website. A user enters his or her annual tax bill, and up pops a separate box overlaying the screen saying "See how much you pay for these services" above boxes of various shades for schools, town departments, pensions, etc.

Place a cursor over each box, and in a window is the part of that amount you contribute.

The town's municipal website has published financial information relevant to taxpayers since 1999. For example, you can see the town's fiscal 2014 budget plan here >>

Arlington's Visual Budget adds an interactive dimension. Not just lists of numbers for departments, the presentation lets you see numbers over time as well as what part any taxpayer plays in contributing to a budget.

The current data underlying the site covers fiscal 2008 to 2018.

LaCourt said she got involved with the project last March, when she discovered that Involution could work on site a website -- and do the work gratis.

Juhan Sonin, Involution creative director, said in a town news release: "We were intrigued by the challenge of this project and, being from Arlington, very excited to work with the town.

"We’re pleased with the results so far and look forward to how residents use the feature," said the Arlington resident. See his resume here >>

Selectmen welcomed the project with enthusiasm.

"Totally awesome," said Chairman Dan Dunn, who works at an IT start-up. Selectmen Joseph Curro Jr., who also works in IT, called the effort "award-winning."

The board voted, 5-0, on a motion by Selectman Kevin Greeley to send a letter of strong thanks to Involution and invite its principals to a future meeting.

What about school finances?

Selectwoman Diane Mahon suggested letting school administrators know about the visual budget and wondered whether school finances could be included in the future.

In introducing the presentation, Chapdelaine said the visual budget "is the brainchild of man." He cited Town Meeting member Gordon Jamieson and the members of Vision 2020's fiscal resources task group.

Involved since then was Bouton, a management analyst the town hired in January. He works mainly for Andrew P. Flanagan, deputy town manager, as well as annual budget work for Chapdelaine.

Previously employed by the Boston Bar Association, Bouton is the guy who feeds town data into the Involution database that underlies the visual budget.

He said he is happy to be part of such a project, because it is "part of the manager's push for transparency," Bouton said.

LaCourt said the Town Day demo was a soft launch, and she sees "hard work in the next couple of months" before is linked to the town's website.

The visual budget gives residents a fresh way to consider Arlington’s budget, and it provides definitions and explanations for some of the more complex municipal budgetary concepts, such as "Override Stabilization Fund" and "MWRA Debt Shift."

Arlington Visual Budget will continue to develop. Still to be developed is a daily, real-time connection to town finances, as money flows in and bills are paid -- a feature the Fincom's Jones said he would like to see.

The town welcomes feedback from users. To do so, email arlington-internal at goinvo.com.