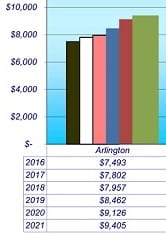 Here's a fact: Arlington homeowners will pay $11.34 for each $1,000 of assessed value, a rate that is a slightly higher than the current year.

Here's an estimate: Under this new rate, the average annual tax bill for a single-family house in town is $9,405 (see chart for comparison of recent years).

Here's an opinion: "Taxes are what we pay for civilized society." So wrote U.S. Supreme Court Justice Oliver Wendell Holmes Jr. in a 1927 case.

See some images from the assessors' report  >>

Agree or not, the public faces annually the results of town assessors' work -- to arrive at the total value of Arlington properties and recommend a rate to tax them.

This year, the Select Board approved the assessors' recommendation to raise the rate 28 cents per $1,000, from $11.06 in fiscal 2020, on Nov. 30, and the state Department of Revenue has approved the new rate.

Tax bills for the next quarter are expected to be mailed and delivered before Dec. 31, wrote Deputy Town Manager Sandy Pooler.

For those fearing a new increase because of the Arlington High School project, charges for the high school debt exclusion have appeared on the bill since August. "We wanted to spread the impact out over the four bills," Pooler wrote.

He did not yet know the total impact of the high school project on next year's tax bill. "We sell more debt in February and will have to see what the interest rate on that sale is," he said.

The Select Board took two votes after the Nov. 30 assessors' presentation, both 5-0, to set the new tax rate and to support shifting the debt for water from the real-estate tax to water bills.

As it has long done, the board did not establish a separate rate for commercial taxes.

"This is definitely not the year to do it," said Select Board Vice Chair Joseph Curro Jr., referring to the impact of Covid-19 on local businesses. He noted that commercial property represents 5.4 percent of the total.

Mary Winstanley O'Connor, a member of the Board of Assessors, said, "Residential remains strong, despite the pandemic."

Select Board member Steve DeCourcey cited $850,163 in new growth, up from $816,617. He estimated that the latest figure represents about $76 million in assessed value.

"We have a need for growth," that is responsible, he said. "This is where you see it and how it comes into play."

No one from the public asked to comment during the hearing.

Typically, comments from the public arise after the new tax bills arrive, spurring some to challenge their assessment and seek abatements.

Paul Tierney, director of assessments, said residents have until the third-quarter bill is due to file for an abatement, which is typically Feb. 1.

Because of the pandemic, Tierney began allowing earlier this year residents seeking an abatement to present videos showing the insides of homes, and that will continue, O'Connor said.

Asked how many have taken advantage of this, Tierney wrote: "Many residents sent pictures to settle abatements, not video. I would estimate 15-20 residents used this method for FY20."

Another opinion: This quotation is attributed by many sources to James Madison, fourth U.S. president: "The power of taxing people and their property is essential to the very existence of government.''

In 1788, he was among those discussing issues, including taxes, that became part of the U.S. Constitution.