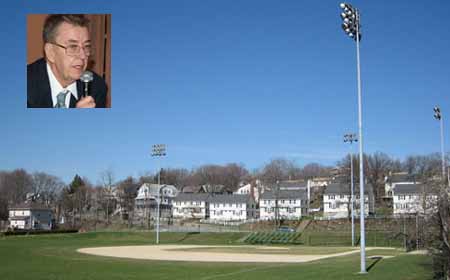 UPDATED, July 26: The ceremony to dedicate and rename the Summer Street baseball field in the memory of the late coach James F. "Robes" Robillard was held Sunday, July 26, as about 50 people took part or watched.

Details about the dedication will be reported.

Organizers, including members of Arlington Babe Ruth Baseball, have an afternoon and evening of baseball of baseball planned, including an "old-timer’s game," which they hope will draw many of Robillard’s past players and friends.

The Arlington Trojans of the Intercity League play at 5 p.m., and the Pond Rats of Arlington Babe Ruth face Medford at 7:30 p.m.
Food, music and raffles took place.

The event was scheduled for June 28, but health issues did not allow Robillard to attend that day, and he died July 6.

Brian Malo, Joe Robillard and Jim Palmer are among many behind the dedication.

A Facebook page named "Dedication of Robes Field" features many old photos of Robillard with information about Sunday’s events.

The page seeks "all former Cubs, Rangers, Pond Rats and anyone else who ever played for Coach ‘Robes’ or even played against him and had a mutual respect and love for the game of baseball."

The former Summer Street field was named for Robillard, who has supported Babe Ruth Baseball for more than 50 years and was inducted into the Babe Ruth Baseball Hall of Fame last November. Selectman approved the name change Monday, June 8.

Selectmen Steve Byrne noted fond memories June 8 about playing for Robillard as a member of the Pond Rats.

"We look forward to seeing you all as we honor Robes for his 50-plus years of service to the youth of Arlington," organizers wrote.

Those involved seek raffle donations. All proceeds will go directly toward field renovations.

This announcement was published Wednesday, June 10, 2015, and John McGah contributed most of the information. Updated July 26, reporting the dedeication.