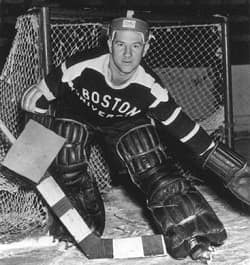 Ralph Bevins in undated BU photo via The Boston Globe

His 1977 Spy Ponder team went to the Division 1 Super Bowl, where it lost.

Mr. Bevins is remembered for a victory, in 1950, when the Terriers upset the University of Michigan, 4-3, in the NCAA Tournament semifinals. He had 34 saves, and was named tournament's most valuable player.

Known as "Ike," he was inducted into the BU Athletic Hall of Fame.

He formerly supervised physical education for grades K-12 in Arlington. He died May 8 in Largo Medical Center in Florida. He had moved to St. Petersburg in 1987, the year he retired from the Arlington school system, and had lived in Largo since 2015.

Mr. Bevins was an assistant football coach at AHS before succeeding his close friend Eddie Burns as head coach in 1975. He was also an instructor at a hockey school run by Burns and Melrose High coach Henry Hughes. Burns was the AHS hockey coach from 1947 to 1997.

When Hockey East commissioner and former Harvard goaltender Joe Bertagna was making the conversion from defense to goal at Arlington High, he attended the hockey school, where Mr. Bevins gave him his first formal instruction.

When his son was head hockey coach at Minuteman Regional Vocational Technical High in Lexington, Mr. Bevins volunteered as assistant goalie coach for three years, including the team's run to the 1986 state Division 3 championship.

Mr. Bevins also was a standout baseball catcher for the Terriers. He was "a player's player and super athlete, a special, gutsy guy who always had your back," recalled former BU pitcher Billy Tighe, about his battery mate, in an obituary published by The Boston Globe on Sunday, June 11.

Dick DeCaprio, a retired Arlington High hockey coach and former dean of students, told The Globe, that Mr. Bevins "looked authoritarian even when he wasn't trying to be. He had charisma."

Robert Bartholomew, a teacher at Ottoson with a keen memory for AHS sports, recalled the 1977 Super Bowl, "a heartbreaker for Arlington. Game ended on a rush/option by the QB, on the two-yard line."

Peter Lavery had 225 yards rushing and receiving, he wrote in an email June 11. On the first offensive play of the game, he went 70 yards for a TD. It was called back by an obvious clipping penalty, on the Arlington QB, he wrote.

Rick Kelleher, a 1967 AHS graduate, wrote that "Ike was the assistant football coach for our 1966 state championship team. He was fair and honest as a coach and a very caring man.

"He showed his players and students respect in every way. He showed us that hard work and techniques learned in practice would pay off.

"Being out of shape around him was a nonstarter. More than his coaching, we all need to remember him a a mentor and teacher.

"He was a class act, and I will never forget the lessons he taught me. They were important foundations that have sustained me over the years."

Kelleher played fullback and linebacker for the 1966 AHS state champs. He is the chief financial officer for Hawthorne Suites.

This news announcement was published Sunday, June 11, 2017, and updated June 12.