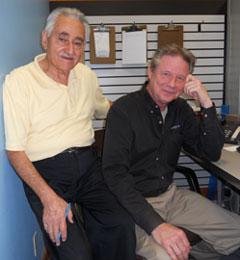 Surrounded by dismantled shelves, inventory tagged with liquidation signs and the quiet of an empty room, 85-year-old Richard Meguerditchian spoke with pride about Cameras Inc, the store he bought 54 years ago.

"Every beginning has an end," Meguerditchian said in an interview Friday, March 23. "This was my business. It was my friend. It was where I lived."

Meguerditchian said Cameras Inc, across from Arlington High School, was to close its doors Tuesday, April 10, according to information provided in the original interview, and is in the process of selling everything off "down to the bare bones." On Saturday, April 17, the store had a sign saying it would close after seven more days.

According to Meguerditchian, the transition from film to digital photographic technology eventually meant that "survival was very difficult" for a store that specialized in high-quality film processing.

A Cameras Inc store in Davis Square, Somerville, was to remain open, but an 11-th-hour decision has been made to close it as well.

The longtime Arlington businessman, who also owns the building in which Cameras Inc is situated, made the final decision to close the Mass. Ave. shop after securing a new tenant.

He said a confidentiality agreement prohibits him from disclosing the name of the business that will be moving in.

"Even my wife doesn’t know who it is," he said, joking.

Meguerditchian was happy to share details of the store’s history.

Cameras Inc first opened in 1956 on Tremont Street in Boston. Meguerditchian bought the photography shop and studio in 1958.

He moved it to Arlington in 1966 after being pushed out of the Boston location in the course of a redevelopment project.

"They gave us a couple of thousand dollars and told us we had 60 days to vacate the place," he said.

Cameras Inc was originally across from Town Hall in the building that now houses Gentle Dental.

Meguerditchian signed a low-cost lease there right after a fire, when the building had no roof, no electricity, and no water.

"All Richard had to do was work 80 hours a week," said the businessman, referring to himself. He was known to his customers as, "Richard M."

Photography was his original profession, and in addition to running Cameras Inc, he worked weekends shooting weddings and bar mitzvahs.

By the mid-1980s, the business had grown, and Cameras Inc moved to its present location, which offered more space and a parking lot.

Meguerditchian said, at its peak, Cameras Inc was the third largest independent photo shop in greater Boston, processing 2,000 rolls of film a day in five labs. Now, "If we do 20 rolls, we’re doing great."

He will miss the business, but at 85, the Lexington resident is ready to spend more time with his wife of 52 years, his children and grandchildren.

Meguerditchian wants to thank his Arlington customers and let them know that he and his family will be fine.

"I was blessed," he said. "The town of Arlington and its people were very responsive to us, which we appreciate. So were surrounding towns.”

Meguerditchian said unredeemed gift cards can be used at the Arlington store until its closing date.

An email from company sent March 29 said that at its peak, Cameras Inc had more than 40 employees in four locations.

This story was published Wednesday, March 28, 2012, and was updated to add the closing of the Davis Square location as well as the March 29 email. It was updated again April 14. The author is a contributing reporter.