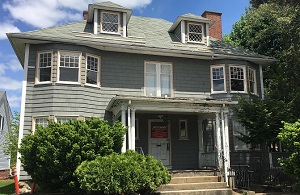 For the first time since 2012, the Arlington Housing Authority (AHA) is actively seeking to either build or acquire existing property in town to add more units to its housing portfolio. The AHA is the town’s largest provider of public housing.

Executive Director Jack Nagle told the board during the monthly meeting May 19 that state funding for a special-needs housing development, called Chapter 689 -- first discussed nearly 17 years ago -- may still be available.

“I’m reaching out to the state and trying to get some information related to how to get this moving,” Nagle said. “There is some bonded funding attached to this project – a little over $2 million.”

The AHA is a state agency that was founded in 1948 and provides rental housing to low-income, senior and disabled residents.

It owns and manages five high and low-rise buildings for senior/disabled residents (all built between 40 and 65 years ago), a sprawling complex for families in East Arlington built in 1949, a 122-year-old stand-alone house, several condos from the 1980s (two of which are affordable housing outside its state-aided public housing portfolio) and a 110-year-old home for developmentally disabled residents.

For the past decade, the aging infrastructure has required significant state and town financial support for the renovation and preservation of these properties, effectively draining resources away from low-income housing development.

The AHA derives its budget from resident rents as well as from an annual state program called formula funding. This rediscovered Chapter 689 state funding provides the authority with the opportunity to grow its housing footprint.

“What this is is an opportunity,” said Nagle. “I’m starting talks with the Town of Arlington to see what options are available potentially to build this [689 housing].”

In 2005, under the leadership of then-director Franklin Hurd, the board explored a collaborative development deal with the Housing Corporation of Arlington to build Chapter 689 on the front lawn of Chestnut Manor, the 100-unit building owned by the AHA that is home to senior and disabled residents.

The proposed joint plan included the “possible inclusion of the Atwood House into the process” by moving the historic building to the manor’s Medford Street location. The long-vacant and neglected property at 833 Mass. Ave., has been the subject of numerous redevelopment, zoning, and historical board discussions. It sits sandwiched between the CVS drug store and the First Baptist Church of Arlington, but recent improvements to the facade include new siding and windows.

The relocation of the Atwood House was determined to be too cost prohibitive. After Hurd retired, the housing authority, under new director John Griffin, independently pursued the $4 million project to build the three-story, 10-unit building for special-needs residents. The AHA received Select Board support, which provided funds up to $50,000 for a feasibility study; the authority hired an architect, secured zoning approvals and was ready to break ground in the spring of 2010, when the project was suddenly put on hold because of funding issues.

Atwood House back on table?

Treasurer Nick Mitropoulos, who was elected to the AHA board in 2001, and served as board chair during the Chapter 689 discussions in 2005, asked Nagle, “Can we get the house next to CVS?”

Without committing to that previously trod path, Nagle said that, “In 2006, they were looking at Chestnut Manor, but we’re hoping – and this will be part of the communication with the state – is that we could consider other locations. And that’s where I want to talk with the town and see if there’s any potential options that we could work out with them.”

YourArlington reached out to Robert Annese, the lawyer for Noyes Realty LLCP, listed as the property owner in the town’s records, and our reporting will be updated with his comments about any discussion involving the development of the Atwood House.

Currently, the AHA owns and manages the Donnelly House, a 13-unit building that opened in 1978, and was the first combined independent-living housing program in the state for people with intellectual disabilities. The home is run in partnership with the Department of Developmental Services, which provides 24-hour supervision and support for individuals with intellectual and developmental disabilities.

In the past, the AHA has also explored acquiring the Mount Gilboa property for Chapter 689 housing, but the board rejected the plan because of safety concerns (the steep cliff face), and inaccessibility to shopping and public transportation.

Chair Brian Connor, who also served several terms as chair during the initial development plans, said that the special-needs population is an underserved community. “Once special-needs students hit age 22, in the whole state system, there’s no place for them to go. There’s a huge need for this.”

The board voted to approve the extension for the $2,129,6215 contract for financial assistance for Chapter 689. Nagle said it “will provide us the opportunity to eventually build this development. I’ll have more news in the coming months, [but] definitely a very exciting opportunity.’

Connor opened the meeting introducing another procedural change to the business of the monthly board meetings, saying that Sandy Melanson, assistant to the executive director, would start taking summary notes for the meeting minutes. This tightening of the information stream follows the "Public Participation Guidelines" that Connor introduced last July.

In April, he presented an update on those requirements, including limiting public comment to email submissions received one week prior to scheduled board meetings, which would be addressed at the discretion of the chair.

The AHA maintains an online database of every public board meeting held since 2004. According to state law, meeting minutes do not need a word-for-word transcription of the proceedings.

Connor said that “we’re only obligated to have a summary of discussions, and we’re obligated to record the votes.” He indicated that since “these meetings are now recorded by cable TV and so forth, I asked Jack to fix our website so that we can link from the meeting to the recording.”

A check of Arlington Community Media inc.’s YouTube channel (ACMi) showed that the AHA board meeting was last recorded in December 2021. There are no publicly available recordings for any of the six 2022 meetings.

During a January 2021 discussion about ACMi’s request to record the board meetings, attorney John Greco, said. “It’s like any other meeting; they can’t interfere whether it’s a meeting in person or a virtual meeting. They can’t interfere with the operation of the meeting. As long as that’s the case. They have the right to do so.”

YourArlington reached out to ACMi for a comment about their recording schedule, which includes recordings of Select Board, School Committee, redevelopment and zoning boards and town meetings, but does not typically cover Community Preservation Act Committee or Community Development Block Grant meetings.

The AHA also records its online meetings, and it was not clear at press time if those were the recordings Connor was referring to that would be posted to the website.

The agenda item for acceptance of the Department of Housing and Community Development sustainability award for Menotomy Manor flood survey was removed from the posted agenda before the meeting, but other items received board action, including acceptance of the town’s American Rescue Plan Act (ARPA) funding totaling $2,654,000 for the Manor’s window-replacement project and the state Department of Housing and Community Development's ARPA formula funding totaling almost $1 million.

These cash infusions, in addition to an emergency CDBG funding request of $350,000 and an approved CPA funding of more than $800,000 for fiscal 2023 (which begins July 1), should help the authority address longstanding and emergency repairs to some of its properties.

All the funding, whether town or state appropriated, must be used by Dec. 31, 2024. “The pressure is on us to get these projects done,” Connor said.

Tenant presidents praised the improved communication between the authority and its residents to address maintenance and building concerns.

“The one-on-one [meetings are] definitely more effective and more productive because we can focus on our property,” said Menotomy Manor tenant president, Jenn Hernandez. “We appreciate it very much.”

This news summary by YourArlington freelancer Melanie Gilbert was published Monday, May 23, 2022.

This reporting demonstrates your donations at work to support democracy here.YourArlington is a 501(c)(3) nonprofit.Your contributions are tax-deductible. Donate here >>