'We are ready, willing and able to do whatever we can for our residents.'
-- Jen Hernandez 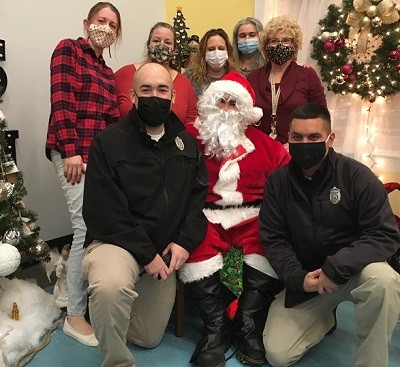 Officers Joseph Canniff, left, and Bryan White pose with Santa and members of housing authority staff and the tenant executive board at the Menotomy Manor holiday party. / Melanie Gilbert photo

The newly organized Menotomy Manor tenant association flexed its organizing muscles at the Wednesday, Dec. 15, board meeting of the Arlington Housing Authority.

President Jen Hernandez challenged Chairman Brian Connor’s decision to follow last year’s plan -- that was driven by Covid concerns -- to distribute $10 gifts cards to the residents of the family-housing complex in East Arlington, in lieu of the holiday meals that are being delivered to residents in the authority’s five buildings for the elderly and disabled.

“We have a tenants’ association now that would have been more than willing and happy to handle the distribution of meals had we been consulted about it,” Hernandez said during the tenants’ portion of the Zoom-held meeting. “We are ready, willing and able to do whatever we can for our residents.”

For nearly 10 years, until its recognition by the board in October, the more than 500 residents of the manor were not represented by a local tenant association. Routine decisions, such as the holiday meals, were handled by the former executive director, John Griffin.

Connor defended his decision by saying the housing authority didn’t have the staff, space or time to offer the manor residents the prepared meals from D’Agostino’s Delicatessen in the Heights.

“We made the call [because] from our perspective, it’s too much of an undertaking. We ran out of time.”

In a demonstration of their ability to organize a community-wide event, though, the manor’s new executive board hosted a holiday party featuring a special guest who arrived in a “sleigh” driven by Officers Joseph Canniff and Bryan White of the Arlington Police Department.

With lights flashing and the “whoop-whoop” siren piercing the mild night air – the police vehicle pulled up to the front of the Life and Skills Center on Fremont Street on Thursday, Dec. 16. Hundreds of manor children – more than 300 residents under-18-years-old live in the housing development – jostled for position to see Santa exit his ride.

The celebration featured outdoor tents, where residents could enjoy refreshments, such as pizza, hot chocolate and holiday-themed desserts. After a picture with Santa Claus, each child was given a wrapped gift donated by Luis Calderon of Terminix, a pest-control company, which recently was awarded the authority’s integrated pest-management contract.

“I just love seeing kids happy,” said Calderon, who also played Santa. “This is a great community.” Hernandez said everything at the party was donated, with residents volunteering their decorating skills as well as serving food and clean-up duty.

Board looks for alternative funding sources

The housing authority will submit its final application to the Community Preservation Act Committee (CPAC) for the $4 million-to-$6 million window-replacement project at Menotomy Manor this month. “We’re excited to move forward in that process,” said interim executive director Jack Nagle.

The authority also submitted a Community Development Block Grant application for the $562,000 roof-replacement project at the Hauser Building, part of the Drake Village complex in Arlington Heights.

Charitable foundation back on agenda

Connor said the housing authority is revisiting the idea of forming a charitable foundation. “We would seek grants, funding, donations, cash or securities or even the donations of houses,” said Connor, who envisions the mission as “support and outreach for the social health and well-being of those persons residing in housing authority properties.”

In 2002, under the leadership of former Executive Director Franklin W. Hurd, the board founded a nonexempt charitable trust called Arlington Housing Associates Inc. During its operation, it recorded zero income, with the board finally dissolving the private foundation in 2005. Griffin revived interest in a nonprofit in 2011, but no action was subsequently taken to develop the idea. “We tried to do this for the last 15 years,” commented board member Nick Mitropoulos, “[but] we never got it off the ground. We should do this.”

The board unanimously voted to approve the formation of the foundation, tasking board attorney John Greco with drafting bylaws. “Nobody’s going to write a check to the housing authority, a state agency,” said Connor. “But I think we’d be successful in having folks write checks to our charitable foundation.”

Hernandez said that the Menotomy Manor tenant association is also looking into forming a nonprofit. “We’ve already started looking into the application process,” she said.  The manor had a nonprofit called the Menotomy Manor Veterans Tenant Association Inc., that operated from 1976 until 1986. Although records could not be located from that time frame, former tenant President Marian King said that donations were used to fund tenant activities such as holiday parties, outside speakers and community projects.

According to Department of Housing and Committee Development regulations, tenant organizations are free to raise money on their own, and the money raised won’t affect the housing authority’s annual contribution to the association. Currently, the authority contributes $6 per unit to the local tenant associations, which comes to just more than $1000 a year for manor tenants.

With the town’s Covid case numbers rising, Nagle said that “the housing authority has partnered with Keyes Drug to administer the Moderna booster shots on Thursday, Dec. 23," for the elderly residents at all five authority buildings.

Nagle said the authority will provide an update to Menotomy Manor residents as to where they can get booster shots.

The five-member screening committee, the tenant presidents and the board plan to meet Wednesday, Dec. 22, via Zoom to interview the two finalists for the executive director position vacated by Griffin, who retired in October. YourArlington will provide a report following that meeting.

There were no public comments, and the meeting adjourned.