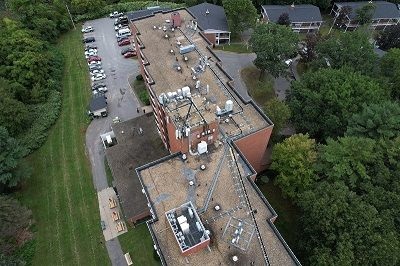 A look at the roof of Hauser displays its many wireless connections. / Drone photo by Cam Rogers

The Verizon antenna contract for telecommunications equipment on the roof of the Hauser building in Arlington Heights drew the attention of the Arlington Housing Authority (AHA) board at its regular monthly meeting Nov. 17 for a number of reasons, affecting the board and residents.

The seven-story building,  home to elderly and disabled residents, is the seventh tallest building in Arlington, an advantageous feature for rooftop installation of wireless transmission equipment.

According to Steel in the Air, a company that negotiates lease agreements between property owners and wireless carriers and cell-tower companies, rooftop sites can provide a coverage radius of up to 25 miles to transmit cell phone signals to and from mobile phones to a rooftop receiver – or as far away as Gillette Stadium, Salem and Framingham.

Last July, the board considered a consent letter from Verizon to modify the existing wireless facility at the Hauser building. The special meeting, which was not part of its regular monthly board schedule, went into closed session, and the meeting minutes, while posted to the website, do not contain publicly available information.

At this month’s meeting, board attorney John Greco continued to express concerns about Verizon’s compliance with its existing rooftop antenna lease saying that it appears the telecom “may have made a number of additions up there . . . [and] we don’t know what they’ve added to this facility in terms of additional power and antennas. They’re talking about adding four antennas and removing two.”

He suggested the board again go into closed session to “discuss strategy with regard to whether it’s bargaining or litigation,” to address the issue. He said Verizon had ignored numerous requests to sign an “affidavit on what it has done on the roof, because the agreement says that they are limited to what’s in Schedule B of the original contract [signed in 2016].”

Greco said a Verizon liaison had reached out and offered the authority an additional $200 per month “through the duration of the contract [2026] if we allow them to stay,” even as he said the terms were unclear as to what kind of antenna equipment and generating power that would involve.

The board voted to go into closed session to discuss “correction to antenna payment at the Hauser Building.” YourArlington will report more details as they become available.

Conflicts with Verizon over broadband upgrades

The antenna conflict is the latest issue between the housing authority and Verizon regarding infrastructure upgrades at its properties.

In late August, between 18 to 22 residents in the Drake Villages complex – which include the cottages and the Hauser building -- lost their Verizon landline phone service for up to two weeks.

Authority management claimed construction damage as the cause, but Verizon blamed outdated technology and aging infrastructure in authority buildings.

In 2015, the Baker administration’s Department of Telecommunications and Cable issued an advisory, “Copper to Fiber Transition: What Consumers Need to Know,” explaining that, “Verizon intends to discontinue providing telephone service over the copper wires running from the street to each home, instead using fiber-optic cables.”

The authority, as the owner and manager of its properties, negotiates building-wide upgrades on behalf of its residents.

“We’ve been working to upgrade this community to fiber-optic cables, as the copper cable that currently services them is aging,” wrote Chris Serico in an email to YourArlington in September.

Serico, a communications manager for Verizon at the corporate offices in New Jersey, said, “[O]ur engineering team completed and presented plans earlier this year to upgrade Arlington Housing to fiber, but we were turned away. That said, we remain hopeful about arriving at a solution that works for everyone.”

The authority, led by interim director Jack Nagle and board Chair Brian Connor, also met with Verizon representatives on Sept. 28, to avert the landline service shutoffs planned for Oct. 26. “The meetings have been productive,” Nagle said. “We are continuing to work with Verizon related to the potential upgrade of our copper phone lines to fiber optic.”

At its October meeting, the Select Board unanimously approved the town manager’s proposed $35.2 million ARPA framework appropriation, which included a $269,000 category of broadband support, with designation of funding to be determined.

In addition to the revenue collected from its residents’ monthly rents, the housing authority receives and applies for a variety of federal, state and local funding sources to address its capital needs and anticipated housing-development projects.

It also has revenue streams from in-house categories, such as laundry service contracts, utility agreements and longstanding antenna contracts, with a variety of telecommunications companies. These include AT&T, T-Mobile and Verizon – some of which date back to at least 1997 - on both the Hauser and Winslow Tower buildings.

Accountant Rich Conlon, who provided the board with the financial statement report ending Sept. 30, said that the antenna money is “set aside for affordable housing in the future. We did a transfer last year of $600,000, and this year, we’re requesting to do a transfer for $200,000. That’s how we buy the houses outside of the state portfolio”

The Department of Housing & Community Development allows surplus (nondeficit) local housing authorities, such as the AHA, to retain 100 percent of these revenues, which can be applied to various projects.

The antenna contracts normally run for 10 years with five-year renewal options and can net the authority between $2,000 to $4,000, depending on the number of antennas stated in the terms of the contract. Based on rooftop photos of the buildings, YourArlington estimates between $20,000- to 30,000 per month are collected from these rooftop leases on the two buildings.

Although Preston emailed Chapdelaine requesting ARPA money because “the AHA lacked funding to consider this or other improvements to its broadband cable system,” its rooftop antenna cellular contracts were providing hundreds of thousands of dollars of income to the housing authority.

Ironically, as Hauser residents were being threatened with having their landline phone service shut off due to aging infrastructure, their building was home to lucrative rooftop antenna contracts providing wireless service to cellular customers throughout Arlington and the greater Boston area.

In October, Nagle submitted a request to Chapdelaine for $500,000 to $1 million from ARPA for the AHA to buy two, two-bedroom condos, “which will increase the affordable housing inventory for the town.”

This money would be in addition to the at least $800,000 set aside by the housing authority from the antenna money for low-income housing purchases.

To date, the housing authority is proposed to receive  $2.5 million in capital needs for the Menotomy Manor window-replacement project, $219,000 in resident services and equipment needs and $250,000 in broadband support for senior residences.

If allocated, these ARPA funding requests would make the state housing authority the fourth most subsidized department in town after the premium pay, water-and-sewer, parks and open-spaces expenditures.

The board unanimously approved the Menotomy Manor bylaws of the new tenant association. Menotomy Manor President Jen Hernandez thanked “the board for recognizing us this evening,” and she said she hoped that “we’ll be able to have a Christmas party in some capacity for the children next month . .  . so the kids can at least have their photo taken with Santa and get their small gift that we’ve given out in past years.”

Connor said Nagle would be discussing Covid restrictions with the health department, and “hopefully we’ll hear that we can do all that.”

Drake Village (Drake cottages and Hauser building) residents are working with Jack Cooper of the Massachusetts Union of Public Housing Tenants to hold officer elections following the August death of president Cathy Spencer. “Drake is still without a president,” said Connor. “However, they’re moving forward with forming elections up there very soon.”

Because of Covid-19 restrictions, the authority held its first remote meeting in April 2020, and except for one in-person meeting last summer, has continued the practice. Commissioner attendance is likewise strong, with virtually no absences among board members since January.

The board voted to adjourn with the next meeting set for 7 p.m. Wednesday, Dec. 15.