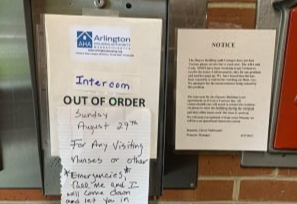 UPDATED, Sept. 11: Richard Fox knows the exact date that his Verizon landline stopped working: Aug. 20 -- his birthday. “I couldn’t even get a phone call on my birthday,” said the 86-year-old Marine Corps veteran.

Fox has called the Hauser Building home for the past five years. It’s part of the Drake Village complex, which is owned and managed by the Arlington Housing Authority (AHA), a state agency that provides rental housing to low-income, elderly and disabled residents.

Fox was one of reportedly 18 to 22 residents in the Arlington Heights complex whose Verizon service was offline for more than two weeks. “If anything had happened to me at home – any physical thing – I wouldn’t be able to call anyone,” he said when interviewed by YourArlington at his home Sept. 5. Residents without a working phone line would not be able to call for help using the 911 service.

The outage also affected the Verizon-enabled front-door intercom entry system to the 144-unit building. Although residents enter with electronic key fobs, visitors, caregivers and other support services, such as prescriptions and food, access the secure building by dialing an apartment phone number to be buzzed in. That service was also knocked offline.

Interim director Jack Nagle wrote in an email that “the information that we have been provided by Verizon indicates that [the outages are] related to damage that was done by a contractor to Verizon phone lines on Mass. Ave.”

But Chris Serico, communications manager for Verizon at the corporate offices in New Jersey, blamed old infrastructure for the sudden and prolonged phone-service disruption. In an email, he wrote that “we’ve been working to upgrade this community to fiber-optic cables, as the copper cable that currently services them is aging. Our engineering team completed and presented plans earlier this year to upgrade Arlington Housing to fiber, but we were turned away in April. That said, we remain hopeful about arriving at a solution that works for everyone.”

Nagle was asked to resolve the differences between his response and Serico's, but he has not responded.

Town Manager, Adam Chapdelaine updated the community on the proposed American Rescue Plan Act framework during a virtual town forum held Sept. 9. Under the category of "Low-income Broadband Support," he said that connectivity is an eligible expenditure within the statute, and while "we don’t have a current proposal for such an investment, just this week, I believe YourArlington covered the need for connectivity in some of the Arlington Housing Authority buildings or improving connectivity.

"So, I’m eager to start engaging with community partners and learning more about how we can put low-income broadband support money to work to try to connect as many residents as possible to broadband and the services that they need."

It’s a large and complex task made even more difficult by the unexpected and ongoing leave of absence granted by the board of commissioners to longtime executive director John Griffin last April. He was replaced by Nagle, formerly the operations manager, who was tapped for the interim position until October. 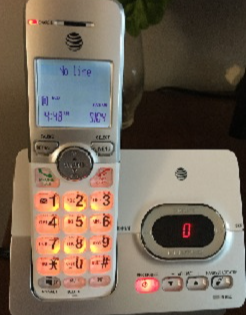 At the same time, the housing authority is in the midst of several multimillion-dollar improvements to its properties, including $2.5 million to replace windows and repair the building envelope at Winslow Towers.

And since 2014, the authority has invested at least $7 million in modernizing and rehabilitating Drake Village, which includes the Hauser building and the 72-unit cottages on the surrounding grounds. Large-scale projects are proposed, such as a multimillion-dollar window-replacement project at Menotomy Manor, as well as roof replacements and ADA-compliant upgrades that are estimated to cost up to another $1 million in capital funds at other buildings.

The fiscal 2022 housing authority budget does not include money to upgrade the telecommunication systems to broadband technology in their properties, such as the Drake Village.

However, the Town of Arlington is slated to receive $34 million in funding from the American Rescue Plan Act (ARPA), and has proposed allocating $250,000 toward low-income broadband relief.

Jennifer Raitt, director of planning and development for Arlington, wrote in an email that, “[broadband] is a category of support that is eligible for ARPA funds and the Town hopes we can fill a gap and be responsive to any broadband infrastructure needs / support if needed.”

Meanwhile, some residents at Drake struggle to cope with being cut off from the outside world – again. First, the Covid restrictions that closed community rooms, canceled public gatherings and required masking and social distancing and now with their landline lifeline offline.

In his email, Serico said that “our goal is to fix a problem as soon as possible – usually within 24 hours.” In Fox’s case, that 24 hours turned into 432 hours.

“[Verizon is] still responsible for maintaining their phone lines,” noted Nagle in an email. “I am taking this issue very seriously and will do what I can to help resolve it.”

By publication of this report, Verizon has repaired resident phone lines, including Fox’s. “A technician knocked on my door to check if my phone was working. I’m so happy to have my service back,” he said - by phone.

Community input to the ARPA funding is open until Sept. 9, followed that evening by a virtual town forum.

The housing authority will brief the community on any proposed funding at the October meeting.