After nearly a decade of dormancy, a tenants’ association for the residents of Menotomy Manor has taken its first formative steps. The group's steering committee -- headed by Rachel Cravotta, Lisa Hersey, Alicia Jones and Vanessa Rowsell -- held an information session Thursday, July 8, in the community room of the Life and Skills Center on Fremont Street.

The elected president of the fledgling group will join the leaders of four other tenant associations in representing their communities at the monthly Arlington Housing Authority (AHA) board meetings.

Filling the room were about 30 supporters and advocates, including Jack Cooper, executive director of the Massachusetts Union of Public Housing Tenants, an organization that is subcontracted by the Department of Housing and Community Development to furnish information to local housing authorities and public-housing tenants. Current tenant board representative and Menotomy Manor resident Fiorella Badilla also participated.

Cooper, who is also an Arlington resident, opened the meeting, saying, “Residents aren’t owned by the housing authority. You have a lot of rights, and my job is to teach you to empower yourselves.” He encouraged the group to form an association in order “to make things happen.” He passed out a “You Have Rights” booklet, as well as various documents outlining the Commonwealth’s public-housing regulations.

Resident Rowsell affirmed Cooper’s comments, saying that there’s “strength in numbers,” because if “everyone’s having problems, we need to come together” to make the necessary changes. She recounted her battle last fall to get a mouse infestation addressed, saying that repeated calls to the property manager, filing maintenance reports and complaining to the board did not get the needed attention to fix the issue.

Rowsell said she and several other tenants plagued by cockroach and rodent problems took their complaints outside of authority purview and to Arlington’s Board of Health. Late last year, the authority hired a pest-control service to take action.

“Who do you turn to when you have a problem when the staff is the problem?” asked Rowsell.

Residents lay out a path to representation

Despite technical difficulties that precluded a slideshow explaining the organizing process, Jones took the floor to lay out how “we need to go to the next level.” She said that a local tenant organization must have:

Jones said residents 18 and older from every household in the 179-unit East Arlington complex can vote in the planned election. Although only English-proficient speakers can be nominated to board positions, Jones said, “Even if not proficient in English, all residents – no matter their language – will have equal representation at the meetings.”

The tenant organization nomination flier will be distributed in as many languages as possible, with the housing authority providing translation support. Cooper reminded the group that the nomination process is open for 21 days, to be followed by the election of officers. Jones said she hopes the steering committee can distribute nomination fliers to residents in September, with elections to be held in October and representation before the authority board by November. Cooper encouraged the group to work with Arlington's League of Women Voters to provide election oversight.

The organizing meeting comes at a critical juncture for the roughly 535 residents of the aging complex that was built in the early 1950s for returning WWII veterans and their families. The main property consists of two-story row houses, called “The Bricks” by residents, as well as duplex-style homes constructed later.

Residents’ complaints about the 70-year-old buildings - the oldest development in the housing authority portfolio - have intensified in recent years, and they say management has not been responsive. They also allege that routine repairs and maintenance have not been kept up throughout the years at the sprawling property.

In April, longtime Executive Director John Griffin suddenly and without explanation took a three-month leave from his duties. He was temporarily replaced by operations manager Jack Nagle, whom authority residents have given high marks to in terms of responsiveness, action and general demeanor. Griffin’s approved leave ends this month, and the authority board is to meet Wednesday, July 21, to discuss his tenure. 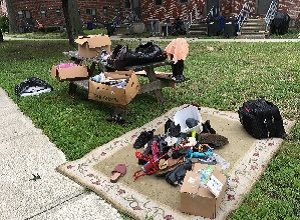 The belongings of a family living in the Gardner Street section of Menotomy Manor are laid out to dry in the courtyard following basement flooding. / Melanie Gilbert photo

On Saturday, July 10, residents along Gardner Street at Menotomy Manor, woke to basements flooded anywhere from 6 inches to a foot of water because of drenching rains the day before spawned by Tropical Storm Elsa. Many of the residents interviewed said water came in through the foundation walls as well as because of malfunctioning or broken sump pumps.

In response to the flooding, Nagle released this statement:

"The Arlington Housing Authority is aware of the unusually heavy amounts of rainfall that occurred over the past few days at Menotomy Manor. Our maintenance staff have been on site responding to reports of flooding or malfunctioning sump pumps in some resident basements. We are in the process of repairing and replacing any necessary components and will continue to monitor the situation in order to ensure these issues are resolved as soon as possible."

Newly graduated Arlington High School senior Njuere Ewah of Gardner Street lost some of the items she had already packed for her freshman year at UMass Boston. “The blankets, pillows, comforters and other things I had packed for my dorm are soaked, and possibly ruined,” she said while helping her mom clean up from at least 6 inches of rainwater that covered the floor. “Everything is wet.”

Audrelle Louis, also of Gardner Street, noticed her flooded basement early Saturday morning. “I’ve lived here two years and have never had water in my basement,” she said, noting that maintenance staff told her that her sump pump was broken resulting in almost a foot of water covering the floor, shelving units and appliances.

Ironically, communitywide property inspections, which were delayed because of Covid and which would test mechanical equipment, such as sump pumps, are scheduled for later this month.

Looking to partner with authority

Jones said that once the tenant association is official, she hopes community meetings for residents of the largest property in the authority’s portfolio will be held every 90 days to address ongoing problems and to identify anticipated ones.

“We’re doing what we’re supposed to do,” she said. “And we’re asking the housing authority to work with us to make [Menotomy Manor] a safe, clean and energy-efficient place to live.”