Your View is the place for opinion at YourArlington.com. It is the site's only blog. Please submit your opinions to be considered for publication on this site. The best opinions are those supported by facts. You cannot expect to be published if your views lack factual support or if you make personal attacks. For your views to be published, your full, real name is required.
Font size: + –
Subscribe to this blog post Unsubscribe
Print

Two poems: Christmas is not a simple matter

On Christmas Eve, I again come bearing gifts -- two poems -- in a column updated from a previous year. 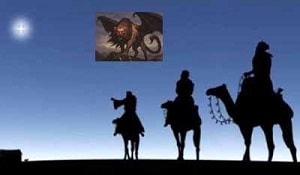 Consider the image at right. Look closely: It is two images.

The main one represents the three "kings" who, according the Bible, saw a sign, which led them to Bethlehem, in what is now the West Bank, where Jesus was born. I am using it to illustrate T.S. Eliot's "The Journey of the Magi."

The smaller inset is an image of the anti-Christ, a creature fulfilling biblical prophecy but substituting itself in Christ's place before the Second Coming. This image accompanies W.B. Yeats's "The Second Coming."

To me, both poems reflect some of the attractions and more of the complexities of  Christian belief. Both poems have their applications today.

What do these poems mean to you?

This viewpoint was published Tuesday, Dec. 24, 2019. You may comment in the window at the bottom of this page.