Your View is the place for opinion at YourArlington.com. It is the site's only blog. Please submit your opinions to be considered for publication on this site. The best opinions are those supported by facts. You cannot expect to be published if your views lack factual support or if you make personal attacks. For your views to be published, your full, real name is required.
Font size: + – 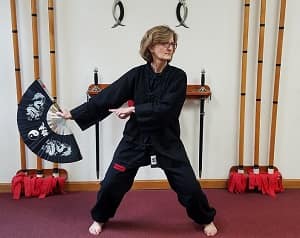 On Nov. 10, she displayed passion, depth of knowledge and physical prowess in demonstrating the 2nd to 3rd Degree Curriculum. In this two-hour test, Mary demonstrated skill in a variety of martial arts and ably maneuvered her way through a multitude of self-defense scenarios.

Mary has been a member of the Board of Registration and Certification of Zhen Ren Chuan since its inception in 2010. She first started training under the tutelage of Charles DeVirgilio, founder of Zhen Ren Chuan Martial and Healing Arts, in Woburn, in April 2002.

Mary continues to teach at Zhen Ren Chuan two days per week and continues to attend the Advanced Degree Lessons on Tuesday night.

She continues to foster and embody the practice of community involvement by participating in events such as Spy Pond cleanups, food drives for the Arlington Food Pantry and caring for ZRC's community garden, at Alton and Broadway. Please join us in congratulating her on this success.

Alyssa K. Clossey, manager of the Facebook group Support Arlington Center, has recognized Zhen Ren Chuan Martial Arts Center, at Broadway Plaza, as its Business of the Month for November.

Owner Charles DeVirgilio provided the background: At 301 Broadway since 2010, Zhen Ren Chuan is a martial and healing arts studio that offers a complete education in the study of the human mind and body.

Zhen Ren Chuan, meaning “The Art of the True Human Being,” encompasses correct and well-balanced exercises, movements and forms that date back hundreds and thousands of years. Offering adult lessons and children’s programs, they teach and instill the knowledge of Eastern ancient self-defense, relaxation techniques, martial arts methodology, values and ancient traditions.

One of the key elements to Zhen Ren Chuan Martial Arts philosophy is giving to others. In 2009, the studio started a community garden where they plant strawberries, blueberries, peppers, tomatoes, herbs and flowers for neighboring businesses and friends of the community.

It has generated a feeling of community around Arlington Center, as local restaurants are using the herbs in their signature dishes - -anyone can come by and take the fruits, vegetables and herbs as well as enjoy the perennials they have planted over the years.

In addition, Zhen Ren Chuan Martial Arts operates Alton Street Boxing & Fitness as a means to facilitate a broader outreach in the community. They are currently offering boxing and fitness classes for people with Parkinson's Disease (as an affiliate of Rock Steady Boxing).

These students have been training over an average span of five years. In the two-hour test, they demonstrated proficiency in various martial-arts styles, they demonstrated skill in practice weapon forms, and they ably maneuvered their way through a multitude of self-defense scenarios, said Charles DeVirgilio, owner of Zhen Ren Chuan, a YourArlington advertiser.

The staff at Zhen Ren Chuan have proudly watched the four grow to develop such virtues as in empathy, patience, determination and confidence, which have made them young leaders within their school communities.

They continue to foster and show the concept of community involvement as they participate in events such as Spy Pond cleanup, tending to ZRC's community garden at the corner of Alton and Broadway and involvement in food drives for the Arlington food pantry.

They embrace and understand that these acts inspire others to give back in meaningful ways.

In a culminating act for this accomplishment, these students submitted an in-depth testimonial reflecting on their unique journeys from white belt to black belt.

The school has recognized each with an embroidered, personalized 1st-degree black belt -- their original belt is now completely black -- and a certificate of rank. Please join us in congratulating them on their success.

This news and advertising announcement, which includes opinion, was published Thursday, Sept. 13, 2018, and updated Nov. 4.