Your View is the place for opinion at YourArlington.com. It is the site's only blog. Please submit your opinions to be considered for publication on this site. The best opinions are those supported by facts. You cannot expect to be published if your views lack factual support or if you make personal attacks. For your views to be published, your full, real name is required.
Font size: + –
Subscribe to this blog post Unsubscribe
Print
4 minutes reading time (878 words)

UPDATED Sept. 22: Town Day on Sept. 17 was much more than a win-win. Depending on your perspective, the day had at least four wins. Consider:

What is Town Day anyway?

The event celebrating Arlington, begun in 1976, has been interrupted since then only twice – for two years by the pandemic.

Defining its meaning are the smiles of attendees, the entertainment erupting from Town Hall's main stage, the fire department demonstration towering just past Robbins Library, the touches of art at Whittemore Park and at Robbins Gardens, the aromatic food (healthy and otherwise) and the more than 200 booths, each seeking attention for its own causes.

Here is what happened at YourArlington's booth, its fourth since the news site was founded in 2006.

Forty-eight people puzzled over the answers to five local-news questions -- "real news," the poster said, as distinct from the fake kind, alleged by a certain former president. "I'm not sure" was a common response. The doubtful took their shots anyway. 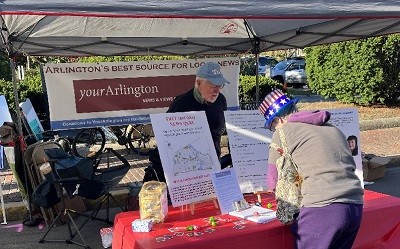 1.) What does the image on the left show (most precise answer)?

2.) How many recreational-marijuana shops have opened in town?

3.) What is the name of the current chairperson of the Arlington School Committee?

5.) Who was Sam Whittemore (Menotomy version)?

a.) A member of the retreating British forces. b.) A farmer who hid from the British. c.) A resident who fought back against the British (correct).

Choosing five winners was harder than I had expected. This week, at home, my wife reached into a bag containing paper slips from 48 entrants. She did not choose five with correct answers until the very last slip.

The test was clearly too hard for many. Should YourArlington "dumb down" questions about town news? Nope. Just keep reporting and explaining Arlington as accurately and as fairly as we can.

Our thanks to all for participating in the quiz -- and those who helped in other ways, by offering news tips.

Two were about shopping carts. One resident sought help reporting about the dumping of carts into the Mill Brook. Another expressed his displeasure with a 2020 YourArlington story about carts taken from markets but not returned.

Others raised these issues for possible investigations -- the Arlington angle on real-estate trusts, why didn't the Red Line extend to Arlington in the 1970s? and "all the amazing Arlington businesses that stepped up" during the pandemic, some reducing prices.

We want to know your story ideas, particularly now that YourArlington is among those nonprofit organizations in town that have won ARPA grants. They are federal, Covid-related funds awarded through a program managed by the Town of Arlington. Over the next two years, the lion's share of the money will go toward reporting.

Here's is the town's news release about these grants >>

What YourArlington can investigate and explain depend on available writers and the site's ongoing resource – you. Would you like to help? Contact us at This email address is being protected from spambots. You need JavaScript enabled to view it..

As a nonprofit, the news site gets its operating expenses in three ways -- through grants, underwriting and your donations. To keep journalism alive in Arlington, now that The Advocate has merged with the Winchester paper and has no dedicated reporter, please consider giving, here >>

Sept. 17, 2022: Arlington celebrates itself, topped off by fireworks

This news/opinion column was published Wednesday, Sept. 21, 2022. It was updated Sept. 22, to change a photo and to add a link to town ARPA grants.

Community
Help the Arlington Commission of Arts and Culture plan more murals by answering this short survey. Hundreds of people have commented on how much they love the new native-plants and pollinators mural by Sophy Tuttle and ACAC's climate futures interns. Now, thanks to a $50,000 transformative growth grant from the Town of Arlington, the commission is planning to create a few more and seek community input. Please take 3 to 5 minutes to fill out a quick survey here ...
Read more

Politics
The state Sen. Cindy F. Friedman (D-Arlington) has reported in an email to constituents a recap of the legislation addressed during the formal sessions of the 2021-2022 Massachusetts Legislature.  Formal sessions – where the Senate usually address bigger, more complex issues and take roll-call votes on the most important legislation – wrapped up July 31. Friedman highlights bills she sponsored "or am very passionate about," with a link to a 50-page complete session report fro...
Read more

Development
UPDATED Oct. 1: The Coalition to Save the Mugar Wetlands has set an initial target of $50,000 to support the efforts of the residents of East Arlington who filed suit last year to prevent the construction of Thorndike Place, a 124-unit, four-floor rental building near documented wetlands. Since June 30, the group has raised $13,955. The neighborhood fair and yard sale set for Oct. 1 has been postponed to Saturday, Oct. 15, with a rain date of Sunday, Oct. 16. Arlington Town Meeting and the ...
Read more

Poetry
UPDATED Sept. 30: Steven Ratiner, Arlington’s poet laureate, sought submissions in February 2020 from Arlington residents to contribute to "a rather unconventional, utterly delightful way to inject poetry into the everyday." It was to remain secret until its debut during April’s National Poetry Month. Then the coronavirus hit. In June 2021, he offers Red Letters 3.0. PUBLISHED:  I was asked to write an essay for Askold Melnyczuk’s Arrowsmith Journal about what I learned from the first ...
Read more

Letters to the editor
Judith Garber of Arlington submitted this letter to the editor: If you love comedy, music, and fantasy, then you will love the Arlington Friends of the Drama performance of “Iolanthe.” When I wasn't laughing throughout the show at the lyrics and delightful physical direction, I was in awe of the acting talent and the gorgeous voices on display. I am excited to see more shows at AFD after such an entertaining performance that combined fairy magic with romance and political satire.
Read more

Share how you use Medford St. to aid roadway design

Town Hall
The town is studying alternatives for restriping Medford Street, following the repaving work completed by the Department of Public Works last summer. The community is invited to share their feedback on how they utilize Medford Street, and what they’d like to see regarding safety and usage improvements.  Take the survey >>
Read more

Reviews
UPDATED Sept. 24: Judith Pfeffer, affiliated with YourArlington since early 2019, was raised on Greek mythology, Tom Lehrer songs and Gilbert and Sullivan. She first saw a professional production of “The Mikado” while in third grade. With the assistance of her parents, she had previously submitted to the producers a request for a line change as a call-out to a then-popular television show, but it was not adopted. Arlington Friends of the Drama has started out strong in their yearlong celebration...
Read more

Town Day
UPDATED Sept. 22: Town Day on Sept. 17 was much more than a win-win. Depending on your perspective, the day had at least four wins. Consider: Five participants at YourArlington's booth each won a $25 gift certificate for correctly answering a five-question quiz about Arlington news (answers and names below). The site, the town's only online independent news source that pays reporters to write about the town, announced in a booth display that it has won a $15,000 federal grant. The funds will be ...
Read more