Your View is the place for opinion at YourArlington.com. It is the site's only blog. Please submit your opinions to be considered for publication on this site. The best opinions are those supported by facts. You cannot expect to be published if your views lack factual support or if you make personal attacks. For your views to be published, your full, real name is required.
Font size: + –
Subscribe to this blog post Unsubscribe
Print
5 minutes reading time (1099 words)

Four members of the town Select Board were asked to tell one story about Kevin Greeley that reflects who he was. (It was hard to keep to one story.) Responses received are published below, as well as the publisher's recollections: 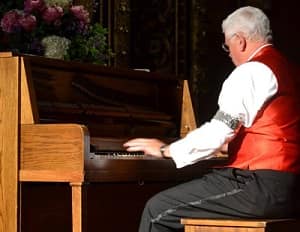 I got to know Kevin when I was serving on the School Committee and he was kind enough to invite me to sing with the Selectones on occasion.

One year, during the Cherry Blossom Festival that was held at Ottoson to welcome a delegation from Nagaokakyo, Japan, Kevin got it in his head to form another little singing group dubbed The Sensational Sensai, which included the two of us, the principals of Ottoson and Arlington High School, and other occasional guest singers from the School Department.

This happened around the time that the schools were facing an extreme fiscal crunch, in 2011, giving way to a massive $600,000 private fund-raising campaign, Bridge the Gap.

One day, I was at Thorndike Field at my daughter's soccer game when who should ride by on the Minuteman Bikeway but Kevin Greeley? He stopped and told me he wanted to help Bridge the Gap, and he proposed the organization of a musical showcase fund-raiser at Town Hall.

With that, I found myself with Kevin and others at numerous rehearsals with the Ottoson music teachers. The show went on with appearances by the Selectones, The Sensational Sensai, several of our school vocal ensembles and School Committee member Jud Pierce's garage band.

Kevin was clearly inspired by this collaboration with the APS Performing Arts Department, moving on a few years later to spearhead a grand centennial celebration of the Town Hall and several holiday singalong shows, each time working with the AHS Madrigal Singers and Jazz Band and always taking a turn on the piano.

Kevin took particular joy in the flash mobs at the end of each show, feigning surprise as instrumentalists and vocalists broke into song from the balconies and aisles of the auditorium. While he never mentioned it, I have always been convinced that Kevin reached into his own pocket to make these shows a success and to ensure that the student performers were fed.

One of the fondest images of Kevin Greeley that I will always hold dear is seeing him in all his glory standing at the microphone and crooning, "Fly Me to the Moon," taking direction from Tino D'Agostino and delighting in the accompaniment of the high school jazz ensemble. I would like to think that Kevin is -- to paraphrase the song -- playing among the stars, that his heart is filled with song and that he will sing for evermore.

To me, Kevin is the embodiment of a public servant who always put the interest of the town and its residents first. He never operated with a hidden agenda or sought personal gain, and he made many sacrifices to be able to serve on the board for nearly 30 years.

One example of this was during his 2013 contested reelection campaign. There was a ballot question that year regarding the Mass. Ave. Rebuild Project. Kevin was a strong advocate for the project because he knew it would provide critical infrastructure and safety improvements for East Arlington.

Kevin used any opportunity he had to speak to the importance of the project, rather than trying to convince voters to support his reelection. His efforts culminated at the Arlington League of Women Voters forum, where he directly told voters that it was more important to support the project than to vote for him for selectman.

I was moved by that comment. It is a true example of an elected official who served for just one purpose, to make the lives of those around him better.

Bob Sprague: I remember his smile

I am a newcomer, living in town only since 1989. That year, Kevin Greeley was first elected to what had long been called the Board of Selectmen.

I edited for the Herald then and, after that, taught at Emerson College. I did not see Kevin in action until August 1994, my first day as Advocate editor.

The discussion was about what kind of meal a restaurant patron should order when buying a drink. Charlie Lyons, 22 years of town public life behind him then, held sway. Greeley, carrying on his father's public tradition, was second fiddle; he chimed in with a smile.

The back-and-forth was important, because town residents had voted to allow liquor licenses, and the board had to decide the nitty-gritty procedures affecting customers.

The smile is what I remember -- not an Irish-blarney grin, but a warm expression of glad-to-be-here. I saw it again many times over the years. It welcomed members of the public to explain their issue to the board.

Greeley expressed other emotions in the 24 years of Arlington meetings I saw -- the expected joke to the food-license applicant: "Do you have samples?" The reddened face of resentment when someone made a claim about a colleague that he could not brook.

After I no longer edited the weekly newspaper, I worked for the town. With Paul Schlichtman's help, in 1998, I started the town's website. At some point, Greeley asked my advice about messaging for a political campaign. I happily gave it, one Emerson guy to another.

Overall. He had a wit quick to quip -- escalating to anger to defend a friend.

Other overrides (2003, 2005 and 2011) and support for other causes followed. That includes the Mass. Ave. Corridor project in East Arlingtonin East Arlington, beginning with a crucial vote in 2009 and basing his reelection campaign in 2013 on backing it. He beat challenger Maria Romano that year by 16 percent.

This was Greeley's tough, public side. He could be soft in public, too -- singing "Take Me Out to the Ballgame" with the Selectones or donning his signature red vest, blazing against his white shirt and silver hair, as he sat down to play a piano rag on the Town Hall stage.

Sure, the songs were corny, but the old shy kid gave you a good time.

These viewpoints were published Wednesday, Nov. 28, 2018.