Your View is the place for opinion at YourArlington.com. It is the site's only blog. Please submit your opinions to be considered for publication on this site. The best opinions are those supported by facts. You cannot expect to be published if your views lack factual support or if you make personal attacks. For your views to be published, your full, real name is required.
Font size: + –
Subscribe to this blog post Unsubscribe
Print
5 minutes reading time (965 words)

Don Seltzer, an Arlington resident, offers the following viewpoint about how a revised zoning law affects East Arlington. These are his own opinions, and he represents no group. This column was published Jan. 30 at sites.google.com/view/arfrr/the-arfrr-blog.

Just over a year ago, our state Legislature passed a law revising the zoning act to create a special overlay zoning district within half a mile of MBTA stations. It says, in part:

“An MBTA community shall have a zoning ordinance or by-law that provides for at least 1 district of reasonable size in which multi-family housing is permitted as of right; provided, however, that such multi-family housing shall be without age restrictions and shall be suitable for families with children . . . ." Source:mass.gov/doc/draft-guidelines-for-mbta-communities/download (Dec. 15, 2021)

The law did not specify what a reasonable size district was, leaving it up to the Department of Housing and Community Development (DHCD) to fill in this “minor” detail. What the DHCD came up with is staggering in its potential impact on East Arlington.

Arlington is being punished by the state.  Our crime was allowing too many homes to be built on small lots, putting us into the top 4-percent densest communities in Massachusetts.  The new MBTA overlay-district mandate now requires us to zone for the increase of far more households than our much-less-dense neighboring communities, who have lagged behind in providing housing. 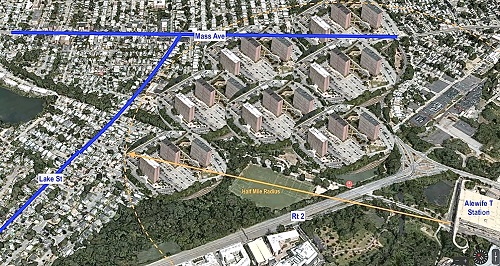 The law requires that we create an MBTA district within a half mile of the Alewife T station, for which our local zoning bylaws must be amended to allow three-family houses or apartment buildings by right on each lot. Dimensional restrictions – such as height, lot size, front and side-yard setbacks and parking requirements -- must be eased, so that many, many more units per acre can be built.  Just how many more depends on how dense a community already is.

Illogically, denser communities must do the most, while lightly developed communities can do the minimum. For Arlington, our zoning bylaws must be loosened sufficiently to permit the potential expansion of this neighborhood to 5,115 units, 25 percent of Arlington’s current housing stock. This is not what our legislators voted on – it was unilaterally tacked on later by the state DHCD.

In this part of East Arlington within that half-mile radius, there are roughly 1,200 housing units. The housing density is already slightly greater than 15 units per acre, generally considered to be suitably dense for neighborhoods near a T station. But it is more than 90 percent composed of two family and condo duplexes. According to the MBTA mandate, these don’t count. It is part of DHCD newspeak that the definition of multifamily now excludes the two-family home.

The nearly impossible requirement of this mandate is that for Arlington, this zoning district within the half-mile radius must have the potential to accommodate 5,115 housing units on just the 80 buildable acres. Much of the rest cannot be developed, including the unusable wetland section of the Mugar tract, Thorndike Field, Magnolia playground, Alewife Brook and Reservation, and Route 2. Zoning for 5,115 units on 80 acres means achieving 64 units per acre, more than four times denser than now.

Rezoning for townhouses and small apartment buildings won't meet the requirement. This would instead require extreme Rindge Towers-type of density. We could comply with the MBTA mandate by rezoning this district to allow 22-story apartment buildings by right. “By right” means that the plans do not have to be reviewed by the Redevelopment Board or the Zoning Board of Appeals.

Residents have zero say regarding a development next door. All they would get is one week of advance notice that construction was to begin. And these buildings could be built anywhere in this neighborhood.

Up to 21 Rindge Towers could possibly be built, replacing every existing home in this neighborhood as well as the East Arlington businesses along Mass. Ave. That would satisfy the mandate. And of course all of these households would continue to be limited to Lake Street and Mass. Ave. for access.

The mandate does offer some flexibility. If we can't squeeze all 5,115 potential units inside the half-mile radius, we are allowed to expand the rezoning area in order to locate up to half of the units outside that district. That means we could get away with 11-story towers similar to Somerville's Clarendon Hill apartments on Broadway, by expanding the MBTA district to cover most of Precincts 2 and 4.

The mandate goes even further in not accepting age-restricted senior housing developments as qualifying. It appears to exclude small-studio and one-bedroom apartments, because it specifies that the housing must be suitable for families with children.

We should start thinking about where to build a third elementary school to supplement Hardy and Thompson.

Our new five year housing plan is already obsolete, even before approval by the Select Board. It briefly references the MBTA mandate in glowing terms, such as the “winds of change” and “Governor Baker’s legislative victory.” Written prior to the issuance of the DHCD guidelines, the town plan mistakenly believes that the goal is a reasonable 15 units per acre, rather than the four-time-greater density that the mandate actually requires of Arlington. It fails to consider how Arlington might comply with these extraordinary demands, and it does not examine the impact.

Updated town housing plan (approved Jan. 24 by the Redevelopment Board)

This viewpoint was published Wednesday, Feb, 2, 2022. Editor's note: Planning Director Jenny Raitt told YourArlington Feb. 2 that the Redevleopment Board and the Select Board plan to discuss MBTA Communities at future meetings.

Do you agree? Disagree? Let the public know by posting your comments in the window below. You must include your full name.