Your View is the place for opinion at YourArlington.com. It is the site's only blog. Please submit your opinions to be considered for publication on this site. The best opinions are those supported by facts. You cannot expect to be published if your views lack factual support or if you make personal attacks. For your views to be published, your full, real name is required.
Font size: + –
Subscribe to this blog post Unsubscribe
Print
2 minutes reading time (365 words)

Quite an accomplishment, and quite a testament to what might have been. 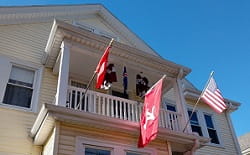 In 2017, the squad topped the Super 8 tourney. This year, the team closed out its remarkable 2019-20 season playing 20 straight games without a loss.

It's the final game -- the one not played at TD Garden on March 12 -- that hurts. Because of concerns about the novel coronavirus, the championship match with Pope Francis was called off, and the Massachusetts Interscholastic Athletic Association declared both teams co-champions.

“It’s a really crappy way for a senior [year] to end,” Coach John Messuri he told The Globe.

If it helps an AHS hockey booster stand the pain, let's allow that bit of exaggeration.Bartholomew graduated from Arlington High in 1967, which he calls "the class of champions." To reach that class, he was a member of the 1966 Class A football team, which went 9-0-0. "I was a captain along with Jack Byrne and Steve Donnelly," he wrote.

He also on the 1967 ice hockey team that was a state champ. Coaching both football and hockey was legendary Eddie Burns.

He began a substitute teacher in 1972. The same year, he was the freshman ice Hockey coach, trainer and equipment manager at AHS. He was on ice hockey coach until 2011.

Now retired from teach physical education, he still goes to Ottoson daily (when it is open), to the before-school program and covers all three lunch periods.

At AHS, he coaches freshman volleyball and fast-pitch softball, and volunteers with boys' ice hockey.

Globe, March 18, 2020: A look back at the history of co-championships (and a near-miss) in MIAA sports

This column of opinion was published Friday, March 20.