The Avocado on YourArlington

The following viewpoint about Amy Klobuchar was submitted by Kurt Fusaris, a formerly Arlington resident who lives in Framingham. Asked to provide a direct Arlington connection, he wrote: 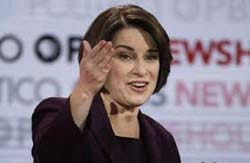 "Indeed, here at home, there is a lot of love for our own Senator Elizabeth Warren. There is no doubt she would be a fantastic president who would offer big structural change, but beating Trump and flipping the Senate has to be Arlington's priority, or else none of that change is possible.  To that end, we cannot risk losing a key Senate seat and a senator who has consistently delivered for Arlington."

In just a couple of weeks, on Super Tuesday (March 3), Massachusetts Democrats and like-minded unenrolled voters will have their turn to weigh in with their preference for the Democratic presidential nomination.

Democrats must unite behind the eventual nominee to defeat Donald Trump.  However, the one best positioned to beat Trump is Minnesota Senator Amy Klobuchar.

She surprised many with a strong finish in New Hampshire, but for those volunteering for her over the course of the past several months, this was no shock. Klobuchar has demonstrated the grit necessary to challenge her rivals, to needle Trump, and to graciously and humorously beat back anything thrown her way.

One need only to watch how she handled Bret Kavanaugh like a boss during his hearing to be a U.S. Supreme Court justice. What is more, Klobuchar has shown how she is a true progressive who gets things done.  Passing more than 100 bills as the lead Democrat has earned her that distinction.

She will push hard for comprehensive immigration reform, fight for a public government-funded health-care option to move us towards universal healthcare, address long-term care for our seniors, advocate for a living wage, support common-sense gun laws, champion criminal-justice reform, and she will tackle the climate crisis, starting by entering us back into the Paris Climate Agreement.

On education, as her first act, Amy plans to fire Betsy DaVos, the current education secretary, and then she says she will make two-year public college tuition-free.

As a Midwesterner who has won over and over again even in the reddest districts, she can rebuild the Blue Wall because for her, the Midwest is not flyover country -- it's her home.

Klobuchar will restore decency, empathy, and true patriotism to the office of president. She will end the noise and the nonsense and put country first again.

She won't just eke out a win at 4 in the morning.  She will win big and flip the Senate, too. With Amy in the White House, Americans will once again be able to sleep at night and get through most days without worrying about what mean Tweet was posted, what law was broken, or which Constitutional provision was violated.

She will rebuild our alliances and stand up to our enemies.  On March 3, please join me in voting for Amy Klobuchar for President.

If you would like to make phone calls or canvass for Amy, please contact me at This email address is being protected from spambots. You need JavaScript enabled to view it..

Letters to the editor