Your View is the place for opinion at YourArlington.com. It is the site's only blog. Please submit your opinions to be considered for publication on this site. The best opinions are those supported by facts. You cannot expect to be published if your views lack factual support or if you make personal attacks. For your views to be published, your full, real name is required.
Font size: + –
Subscribe to this blog post Unsubscribe
Print
5 minutes reading time (1093 words)

Steve Poltorzycki, an Arlington resident writes about what he sells -- local real estate.

Here are my comments recapping the Arlington single-family home real estate market through three quarters of 2018. Please This email address is being protected from spambots. You need JavaScript enabled to view it. if you would like to receive similar reports that I prepare for other nearby towns. Highlights:

Twenty-eight percent of single-family homes sold for more than $1 million sp far in 2018, an all time Arlington record. Through the first three quarters of 2018, 56 homes sold for over $1 million (versus 49 for all of 2017).

The median sale price ($820,000) rose 9 percent over 2017 ($750,000), continuing an unbroken string of price rises since 2012. Prices per square foot also rose in 2018 versus 2017 (8%), indicating continued market strength across all sizes of single family homes. Arlington single family home median prices have risen by 58 percent since 2012, a rate of price rise that makes Arlington one of the hottest real estate markets in the Boston area.

What about the stories you may have been reading about a softening of the real estate market nationally and in the Boston area? I have some thoughts on this to share soon. 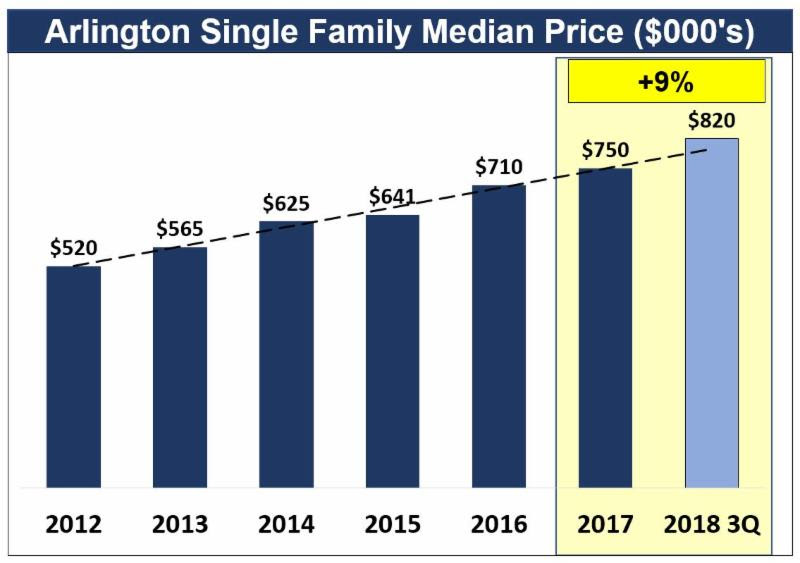 After a momentary step back in 2015, days on market (DOM), a good measure of the strength of buyer demand, continued their downward trend from 2016 through 3Q 2018 (the shorter the time, the greater the buyer demand).

Nineteen DOM during 2018 indicates that homes were on market for only a short week or two before they went under agreement. The strength of buyer demand in Arlington in 2018 surpassed that of neighboring communities, such as Cambridge (21 DOM), Medford (22 DOM), Belmont (24 DOM), Somerville (32 DOM), Lexington (35 DOM) and Winchester (52 DOM). 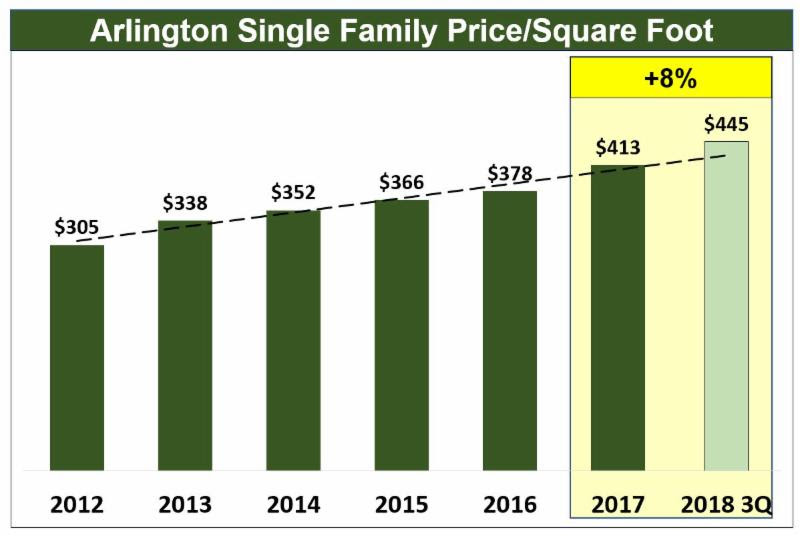 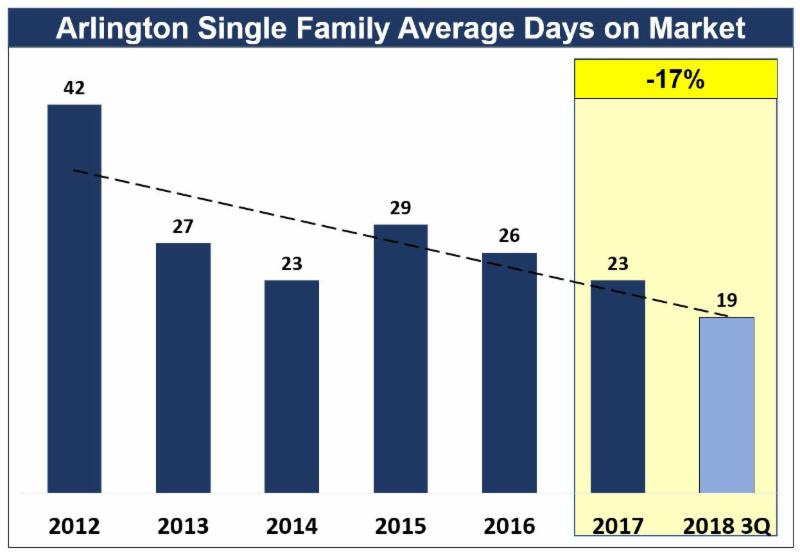 Another key measure of buyer response to the market is by how much actual sales prices exceed (or fall below) asking prices. Arlington single-family homes in 2018 sold on average for 5 percent over asking price, reflecting extraordinarily strong buyer demand. Buyers don't pay more than asking price unless they face stiff competition from other buyers for the same property. 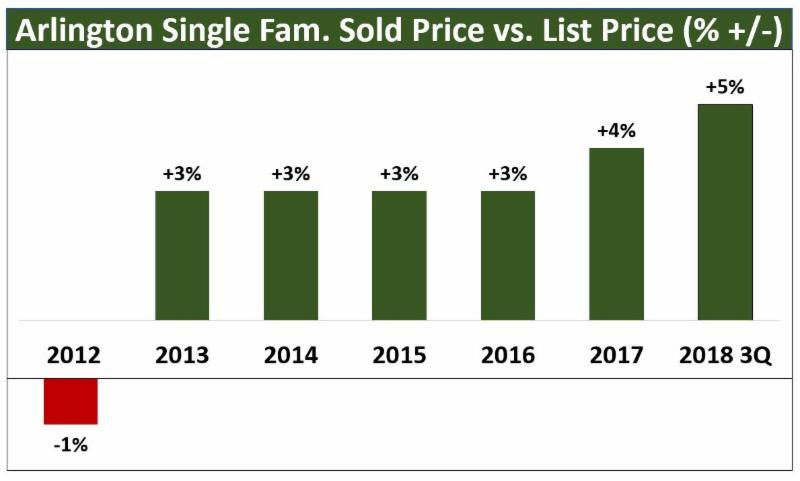 Inventory levels may be increasing

After a period of several years of declining new listings, there was a modest uptick during the first three quarters of 2018, which saw 274 new listings come on market, versus 258 during the same period in 2017. Sellers appear to be seizing the opportunity to lock in the gains made available by all-time-high price levels.

\This shows that, from a buyer's point of view, Arlington single-family homes are a good value in comparison to homes in nearby towns, and, from a seller's point of view, that the Arlington market will continue to attract buyers priced out of some neighboring markets. Another point of note for home owners is that the average size of house sold in Arlington has been considerably smaller than in all other nearby communities that have higher median sales prices.

It may be that the lower sales prices in Arlington are more due to house size than to other factors, such as location. In that case, it may be advantageous for owners of smaller homes in Arlington to consider investing in renovation and expansion projects that could pay off when the home is sold down the road. 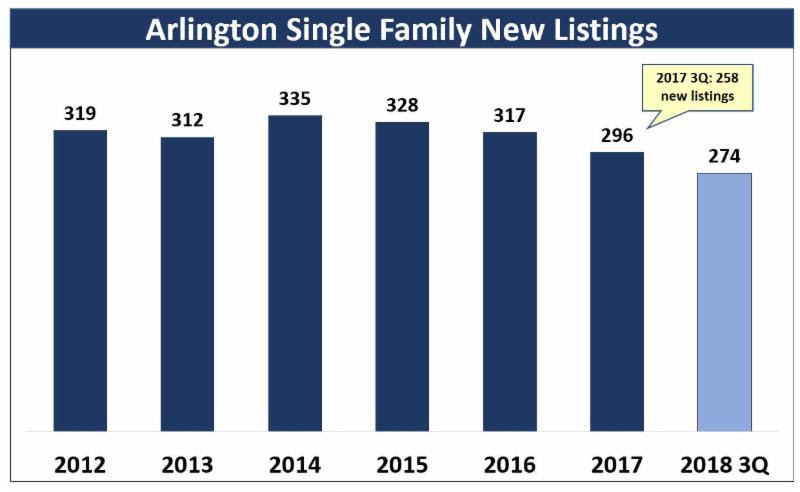 Implications for sellers and buyers

Sellers of single-family homes in Arlington are enjoying one of the stronger seller's markets in the Boston area, with prices continuing to rise steadily. Of course, there is no guarantee that home prices will continue to go up (I will share some thoughts in the next few days on the direction of the real estate market).

Rising interest rates, a stock market correction, and local factors, such as a potential Proposition 2 1/2 override (raising Arlington property taxes in the face of an anticipated budget shortfall in 2020 -- a matter that remains uinder discussion) and the large debt exclusion that will be needed to pay for the high school building project, could have a chilling effect on Arlington home prices (in the short term, though a new high school would likely make Arlington an even more attractive place to live, which could increase home prices down the road). 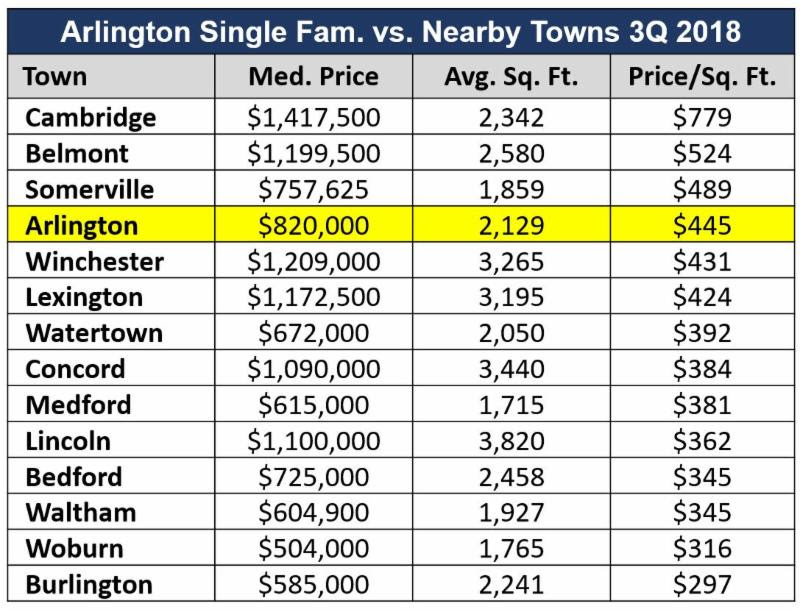 Given the record prices homes are fetching on the market, owners thinking of selling might want to lock in gains by selling sooner rather than later.

Buyers looking for a single-family home in Arlington will continue to face a seller's market, often with several buyers competing for the same property. Buyers need to be prepared to move fast and put in competitive offers with as few strings attached as feasible. But, despite rising prices and tight inventory, Arlington per square foot prices are a relative bargain compared to Cambridge and Somerville.

Data were collected from MLS PIN and MAR and do not include private transactions. CENTURY 21 Commonwealth and its sales agents make no representation as to the accuracy of the data and are not responsible for any actions taken as a result of use of or reliance on this information.

This column of information by Steve Poltorzycki was published Saturday, Oct. 27, 2018. Please email him at steve[@]stevepolt.com if you would like to receive his real estate newsletter and see his website >>

Letters to the editor