Your View is the place for opinion at YourArlington.com. It is the site's only blog. Please submit your opinions to be considered for publication on this site. The best opinions are those supported by facts. You cannot expect to be published if your views lack factual support or if you make personal attacks. For your views to be published, your full, real name is required.
Font size: + –
Subscribe to this blog post Unsubscribe
Print
3 minutes reading time (697 words)

First for the Center with more to come

UPDATED, Oct. 21: Artful Heart is a tight fit for a cash mob.

No matter. This mob was polite as customers squeezed in best they could at 8 Medford St. on Saturday, Oct. 15.

The next morning, owner Carla Dorato called the first in a series of events for Arlington -- announced by a citizens' group, Support Arlington Center, to attract customers to Center businesses -- "a wonderful success." [See note at end.] 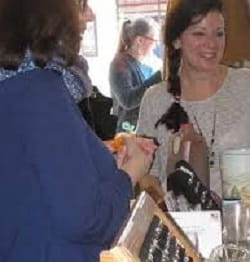 She said traffic swelled beyond her expectations. It remained steady between 2 and 5 p.m., and she turned out staying open until 10.

About 2:15 Saturday at the shop across from Regent -- theater co-owner Leland Stein showed up -- customers were inside and out. At sidewalk tables offering price breaks, Laura Morrissette, a longtime friend of the owner, was in charge. You may have seen Laura's elaborate gingerbread houses in the shop's window when it was in the Plaza.

Inside, 12 to 15 customers sidled among the displays of jewelry, scarves and pottery. I was among them, seeking a present for my wife on our 27th anniversary.

I was following a personal tradition dating back two decades, when the store was named Divinity Splendour-Glow, when it was on Broadway Plaza and Renuka O'Connell was in charge.

I focused on some funky, square earrings made by Joan Carruthers that were the right price.

Behind the busy counter, jammed with cookies and apple cider, was Carla's son, Gianni, and Susan Denio. I did not see daughter Liz, who often is there.

Gianni took my order, and that made me eligible for a $50 gift certificate in raffle for purchasers.

From the "mob" emerged a customer who came to pay -- Beth Kavanaugh, who used to work the counter when Renuka owned the Broadway Plaza store.

"I don't shop in Lexington," she said, referring to the town where she lives. It was good to see Beth's smile, happy to meet an old acquaintance and to have made a pleasant purchase.

Dorato's history with Divinity Splendor-Glow goes back two decades, when she her own jewelry sold on consignment in the store.

The shop long had a spiritual essence, imparted by its former owners, and that seemed to play out as you take the long view: The original shop began where Artful Heart is now, at 8 Medford.

So Dorato's having to leave Broadway Plaza last June after difficulties with a landlord ends up as being a full circle. Philosopher Nietzsche called it the "eternal return." More commonly, others might say, "What goes around comes around."

Few were thinking about all that at Arlington's first cash mob -- a selling event that some think originated in Portland, Maine, in 2012.

This was the first Arlington cash mob. Others are expected.

Dorato said she had talked with Arlington Centered about having one, in part to fend off the effects of construction during the Mass. Ave. Safe Travel project.

Since 2008, she has headed Arlington Entrepreneurs, http://arlingtonentrepreneurs.org/ a grass-roots group dedicated to supported small business in town. She is working with Support Arlington Center to energize the town's solar plexus, beset by a number of empty storefronts.

At this point, she said she has about 200 businesses officially registered as members, plus more "looking in" from Facebook and emails.

Any Center business that wants a cash mob should contact Rydzynski at margy[@]arlingtonentrepreneurs.org.

One proviso: "I am giving priority to businesses which have been affected most by the landlords," she said.

This personal column was published Wednesday, Oct. 19, 2016, and updated Oct. 21, to add this note: A reader suggests that the town's first cash mob occurred a number of years ago to aid Paper & More, then in Brattle Square.

Poetry
UPDATED Nov. 25: Steven Ratiner, Arlington’s poet laureate, sought submissions in February 2020 from Arlington residents to contribute to "a rather unconventional, utterly delightful way to inject poetry into the everyday." It was to remain secret until its debut during April’s National Poetry Month. Then the coronavirus hit. In June 2021, he offers Red Letters 3.0. PUBLISHED:  I was asked to write an essay for Askold Melnyczuk’s Arrowsmith Journal about what I learned from the first y...
Read more

Environment
Worst Offender: Somerville’s SOM01A combined sewer overflow. UPDATED Nov. 21: Precinct 13 Town Meeting member Kristin Anderson, who is monitoring the combined sewer overflows into the Alewife Brook, provided this update via her blog, Save the Alewife Brook. The group's next meeting is set for 7 p.m. Sunday, Dec. 4, on Zoom. Please join the group to discuss the new Alewife Combined Sewer Overflow (CSO) Control Plan. The second public CSO planning meeting is expected to be Dec. 15 (to be confirmed...
Read more

Politics
The office of U.S. Rep. Katherine Clark (MA-05) provided the following statement Nov. 18 about her candicacy seeking the No. 2 position in the House:  Assistant Speaker of the U.S. House of Representatives Katherine Clark has announced her candidacy for the position of Democratic whip. In a letter to colleagues, Clark outlined her goals: delivering results for the American people, empowering members and unifying the Democratic Caucus. The vote is Nov. 30. Here is the text from her letter: "...
Read more