Your View is the place for opinion at YourArlington.com. It is the site's only blog. Please submit your opinions to be considered for publication on this site. The best opinions are those supported by facts. You cannot expect to be published if your views lack factual support or if you make personal attacks. For your views to be published, your full, real name is required.
Font size: + –
Subscribe to this blog post Unsubscribe
Print
3 minutes reading time (699 words)

Bagpiper Campbell Webster returned to Washington Street after noon Saturday, April 11. He played and marched up the street between Crawford and Candia streets, as a number of people watched.

UPDATED, April 11: The steady tolling thrum of the bagpipe -- expressing the sad insistence of death and life -- brought part of a Turkey Hill neighborhood together for a brief time as the coronavirus threat rose. 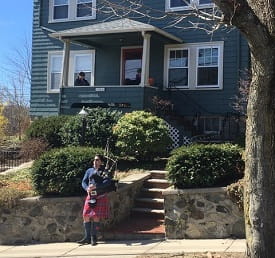 Up Washington Street strutted Webster, playing in kilts, as we watched from our porches that bright, blue afternoon Saturday, March 21.

"Piping seems particularly suited to an outdoor neighborhood concert," noted Barbara McOwen, who had notified immediate neighbors and others about the event. "We enjoyed the music and each others’ company with waves and shouted halloos."

As Webster began to play, Emma Romeu Riaño, a poet originally from Cuba, shot a video using her phone. So did neighbors Vithal Deshpanda and another, who multitasked, handling a camera and the leash restraining her pup, Dunkin.

Getting some other shots was Robert McOwen, a math professor at Northeastern. He and his wife are longtime advocates of highland dance and Scottish fiddle music.

Down the steep steps from 146 Washington came Webster, as his sister and a family friend watched. Uphill he marched to Crawford Street, where he stopped, stern, facing south. Across the street, neighbor Marjorie Howard was talking to Michelle Hamblin, who wanted to know whether the bagpipe music was for her mother, Mary Paradis. She had died the night before.

As he played, Hamblin, always a jokester, even on sad occasions, said that her mom smiled slightly just before she passed on. Why? She was told a fib -- that our president and VP had coronavirus and that Nancy Pelosi was in the White House.

What's a little neighborhood gathering without a trace of rueful humor?

This event -- which came to pass because Romeu had reached out to her neighbors to get together on Zoom, a videoconferencing app -- illustrates the possibility of creative encounter though we are separated by a dangerous virus, and all are the better for it.

As Barbara McOwen wrote afterward: "[T]he pipes are traditionally played at momentous life transitions, like weddings and funerals. I don’t know about births, but we can add quarantines and the almost-shutdown of the entire state, country, world to the list."

Further, Webster is "one of those musicians who lost all of his performance (and payment) opportunities for the foreseeable future. Music can live on in our memories and in our hearts if it is shared, and this was a good opportunity for Cam to reveal the pipes as a beautiful and amazing (and fun) instrument."

Currently, he leads the New Hampshire Pipes & Drums, plays with the Worcester Kiltie Pipe Band, the Red Hot Chilli Pipers and Tullochgorum (see the McOwens, who have been long part of this group) and has formed his own ceilidh band, The Celtic Beats.

Some history: In 1992, Lezlie Paterson, a Canadian who was living and teaching in New Hampshire, met Campbell’s father, Gordon Webster, the pipe major of the 1st and 2nd battalions of the Scots Guards in the British Army, and the 9th Sovereigns Piper to Queen Elizabeth II. They were married a year later in Edinburgh Castle in Scotland. In 1998, after Gordon’s retirement, the Websters moved to Concord, N.H., with their two young children, to take up Lezlie’s highland dance and piping students and connections there.

Barbara wrote: "Although Robert and I have remained close to the Websters, we never see them as often as we’d like, so we invented a safe gig for Campbell, to play an impromptu block concert. By all reports, the neighbors loved it, Campbell had a blast and it was a way to contribute back to the family for all they’ve given us over the years, and to our neighbors for their patience with our band rehearsals."

This personal news feature was published Monday, March 30. It was updated April 11.