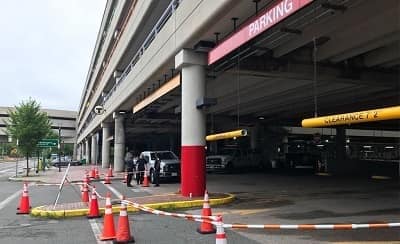 On Saturday, Sept. 1, weekday rates at the garage will increase to $9, from $7, instead of the original planned fee of $10, which would have made it the most expensive parking facility in the system. Weekend rates remain at $3.

The T alerted local elected officials of the change in a letter, saying the rate hike was being reduced “in light of the major repairs at the garage that are set to begin in September.”

The MBTA has declared its troubled Alewife garage "safe to use" after an inspection Friday, Aug. 24, and it opened at 5 a.m. Saturday, BostonGlobe.com reported. The tour included Town Manager Adam Chapdelaine.

The MBTA reopened its Alewife parking garage in Cambridge Monday, Aug. 20, closed through a second weekend after deteriorated concrete required added repairs the preceding week. BostonGlobe.com reported that state state Sen. Cindy Friedman said: “You’ve known about these issues at Alewife for a very long time. You did nothing.”

Later, at the Aug. 13 Select Board meeting, Friedman said: "This is all part of them saving money. At the T's fiscal-management control board meeting, we asked that they tell us exactly what is their long-term plan and to make parking free until the garage is fixed."

Garballey added: "We articulated at the meeting how furious we are with the lack of accountability. It's unconscionable."

Read the report in Cambridge Day >>

20-year commuter to Alewife begs off

Further, Thomas Davison of Arlington told The Globe that he and his wife have parked in the garage as part of their daily commutes for about 20 years. Lately, he has biked or taken buses to work because he worried about the garage’s condition.

In late 2017, T consultant Thornton Tomasetti rated the condition of multiple parts of the garage as risking “imminent failure” and recommended “immediate corrective action,” even though the T had already been completing smaller-scale work on the garage for years.

The decision came two days after a chunk of concrete fell on a car inside the garage, prompting the agency to close off a section encompassing about 500 spaces.

Channel 5 reported that more concrete fell inside the garage, which on Friday was closed to additional cars. The latest incident involved five chunks of concrete that came down Friday morning in the area where cars enter and exit the garage.

T spokesman Joe Pesaturo told The Globe Friday that people who already have cars parked inside would be able to drive their vehicles out of the garage.

“Engineering teams are focused on ensuring a safe path of travel for vehicles exiting the garage throughout the day,” the T said in a statement. “The MBTA apologizes for the temporary displacement of parking spaces and appreciates customers’ patience while the repair work advances.”

On average, about 25 MBTA employees and contractors worked on the garage at any given time on Saturday, a T spokesman told The Globe.

The three implored the MBTA’s Fiscal Management and Control Board to promptly provide both short- and long-term plans for repairs to the garage’s infrastructure to increase safety and improve the quality of life for commuters.

“The decrepit conditions of the Alewife garage are well-known to the thousands of commuters who use the garage daily to get to work,” Friedman said in the release. “It’s time for the MBTA to stop with the patchwork repairs and invest in long-term fixes to improve the safety and usability of the garage. There is no reason why people should be paying so much to park in a garage that is in such poor condition.”

Alewife is the northernmost station on the MBTA’s Red Line, and is used by thousands of commuters every day from nearby communities. For many, parking at the garage is necessary to access the Red Line. The garage is quick to fill up every morning, and prolonged construction threatens to seriously impede commuter access to Boston and other major economic centers.

Jehlen added: “We should be fixing these dangerous structures, not just putting on band-aids. Governor Baker is reported as saying we don’t need more funding for transportation infrastructure, and ‘let’s do a better job with the dollars we have.’ It’s the job of the FMCB to do that, but also to ensure that our constituents and passengers are safe and well-served. The FMCB needs to advocate for adequate funding to make a long-term capital plan that doesn’t continually waste money on emergency fixes.”

The decaying conditions of the 33-year-old Alewife garage have been well-documented for nearly a decade, the release said. In February 2017, a car was damaged by falling concrete, and a December report concluded that the garage needs “immediate corrective action” due to “moderate to advanced levels of deterioration in the primary concrete components of the parking garage.” Temporary hydraulic supports line much of the garage to hold up the concrete.

About 500 parking spaces were closed off last week for repair and inspection. A contract for $5.7 million was awarded for structural improvements to the garage, indicating extensive repairs are needed.

“The current condition of the Alewife station is absolutely unacceptable,” Garballey said in the release. “I joined my colleagues in government and testified before the Fiscal and Management Control Board to demand accountability, and for a short-term and long-term plan on addressing the needs of Alewife station.”

Elected officials also addressed the MBTA’s recent decision to raise the daily parking rate at the Alewife garage from $7 to $10, due to occur in September. For the thousands of nearby residents who use the garage as part of their work commute, this increased parking fare could add an extra $750 annually in additional commuter costs.

On July 9, Friedman and several colleagues sent a letter to MBTA CEO Louis Ramirez to express their concern with the parking-rate increase. The MBTA has not responded to that letter. [Ramirez told The Globe this week that pleas will be considered.]

At the Aug. 13 meeting, members of the MBTA board acknowledged that they had failed to effectively communicate the conditions of the garage. No plan was articulated to lower parking rates during or after scheduled construction begins in September.

Comments on the Arlington List Facebook group heated up Aug. 11 after an East Arlington resident, not far from Alewife, reported that he got a parking ticket in a two-hour zone -- in fromt of his own home. He was advised to challenge the ticket at Town Hall, and town's parking clerk told him how to do so.