Minuteman users triple, and they're not all cyclists 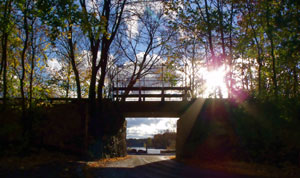 UPDATED, June 30: The number of cyclists riding one busy part of the Minuteman Bikeway has tripled since 2011.

That's just one intriguing bit of data from the most recent count of users on one of the region's busiest "highways" used by a variety of folks.

In a brief news release, with no analysis, the town reported that on a Tuesday in May 2011, 527 cyclists pedaled through Swan Lane. Five years later, the number for cyclists near the Kickstand Cafe, jumped to 1,539. The numbers on a May Saturday between those years were higher -- 892 increasing to 2,538.

Those riding bicycles are far from the only bikeway users. Consider walkers: 498 on a May Saturday in 2011, jumping to 875 five years later.

Then there are joggers, bladers, those with child carriers. All categories increased. See all of the numbers here >>

One response might be to discuss etiquette. Many Emily Posts may pipe up at this point, but let's try to steer clear of "camps" -- from pro-pedestrian to anti-bike.

Stick with the basics: All bikeway activities should keep right.

If you're not moving -- whoever you are and for any reason -- get off the path, until you can take care of whatever it is.

In its wisdom, the town included with its release of bikeway counts an announcement that Arlington had adopted a Complete Streets Policy. Read it here >>

The Board of Selectmen did that in April, but better late than never. The action applies throughout the town, including the bikeway.

The policy aims to make Arlington streets safer for all modes of travel -- walking, biking, driving and transit. The policy encourages the town to consider all modes when making street and sidewalk repairs and improvements.

The policy was developed by the Transportation Advisory Committee (TAC), in consultation with the Departments of Public Works and Planning and Community Development.
In May, the Mass. Department of Transportation endorsed the selectmen's policy), making the town eligible for funding under the state's Complete Streets Program.

Complete Streets aim to encourage more people to use their cars less, for their own, and the town's health and well-being.

Minuteman Bikeway is included in this listing

This report was published Wednesday, June 29, 2016, and updated, to correct "keep right."