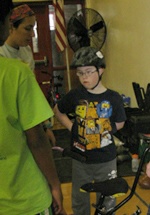 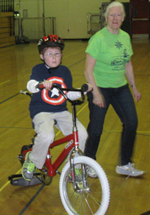 Do you remember the first time you tried to ride a bicycle without training wheels? You felt tipsy as the bike went left, then right.

Maybe you had help, maybe not. Chances are, your two-wheeler weaved a bit, and over you went with a scraped knee.

Remember the primal fear ... then the joy as, at last, you rode out, straight, on your own?

Imagine what this like for a youngster with a disability?

Nina Fischer, an Arlington resident, has. The weeklong bicycle camp she coordinated at Ottoson during school vacation week, part of a national program called iCan Shine, addresses the fear, and then it pedals toward elation.

"This is a miracle," she said in an interview April 24, as we sat on a bleacher in the Wood Gym. "This is their transportation, and they can have it for life."

More than 80 percent of campers are riding independently by week's end, she said. The rest need a bit more time to get there with help from their families.

Upbeat music brightened the dim gym that Thursday. Five youths were riding modified bikes on the wooden floor, each guided by two volunteers, in yellow and green T-shirts. In the camp's fourth day, those new to wheels circled and circled, their bicycles' rear wheels buoyed by beveled rollers. Their faces were anxious and eager.

The volunteers -- handling 25 campers -- ranged in age from teens to an enthusiastic older man, notable for his long blond locks.

Peter Reagan, 65, a volunteer for all sessions, has ridden a bike since grammar school, commuted by bicycle to work all his life and raced for more than 10 years in New England and coached a women's professional team.

"It's amazing to watch the kids develop skills to ride a bike," he said. "It seems doubtful that any parent has the skill set, the time or the equipment to teach their own special needs kid to ride a bike.

"This program fulfills on all levels, and it is so rewarding to see kids who knew nothing about bike riding now nearly ready to take a real bicycle outside and ride somewhat independently."

That step took place on the last day of the camp, in the Ottoson parking lot. 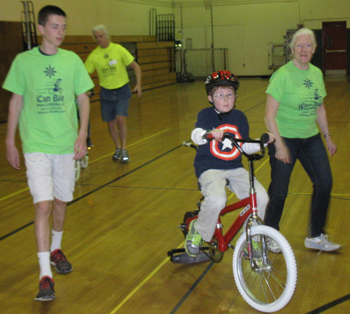 A boy new to biking gets his wheels working

For 70 minutes, experienced volunteers start with a bicycle that is easy to control and gradually changes the rear roller to allow for more freedom of movement as the young person develops skills.

"This approach is much better and more gradual than any training-wheel set," Reagan said.

The volunteers then push and stabilize the bike using a bar attached bar to the bike's rear frame.

As about 10 parents and some children watched from one row of bleachers, they saw the neophyte cyclists receive much encouragement and get short breaks for water.

To participate, the camp accepts those 8 and older who have a diagnosed disability, Fischer said. One camper was 19. The Arlington program has about 35 percent with Down syndrome, 35 percent on the autism spectrum and rest with a variety of developmental disabilities.

In her second year of managing the Arlington camp, she said 90 families were on a waiting list this year; last year, 125 were on the list.

The national program focuses on bicycling to build confidence, puts kids in potential social situations and gets them moving.

"Our kids have a lot of fears," she said, a key goal the camp seeks to overcome.

"Eighty percent are independently biking by the end of the week," she said.

To help overcome fears, the system employs eight rollers, from less tapered to more so. One set at a time is affixed to a rear wheel.

The idea is to start out with a kind of training wheel that assures initial balance and then move toward rollers that taper at sharper angles, allowing more tipsiness, so kids can learn to adjust. As they proceed this way through the week, they learn balance and how to steer.

Helping with the rollers and gear is John Reyes of San Antonio, Texas. With Andrea Patrick, floor supervisor, from near Dayton, Ohio, they were the two iCanShine permanent employees at the camp.

Patrick has worked for iCan Shine for five years. The program is in 32 states and has held 12 camps this spring. Last week, she was in Darien, Conn. Now she looks ahead to summer, which could be anywhere from New Your state to Minnesota to California.

For her, the spark lies in "seeing how many people [the program] affects.

"The self-confidence that builds [through a week] is amazing. Every progression and milestone is worth it."

Agreeing with that was parent Kelly Paulson of Melrose, who was seated on the bleacher with her daughter. She had been there all day.

The former middle-school science teacher called the program a way for her 9-year-old son to gain confidence.

Fischer got involved after trying for three years to find such a camp for her daughter, who has a physical disability. Jeff Sullivan, a founder of iCan Shine, called from Pennsylvania and asked her to consider starting a camp, and she did.

She's happy about the decision, despite the work corralling volunteers and fund-raising (she topped her $5,000 goal; not all donations are reflected at this Web link).

Of the iCan Shine camps, she said they are "the only ones in the world who do this."

Plans are underway for next year's camp, which will take place during April school vacation week at Ottoson. If you are interested in helping out with next year's camp, contact Fischer at arlingtonbikecamp at gmail.com.