UPDATED: The Arlington Soccer Club (ASC) has reaffirmed its commitment to partnering with the Town of Arlington to build a turf soccer field through a public/private partnership and is willing to contribute a minimum of $250,000 to the project. 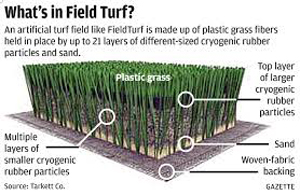 "These funds have already been raised and are sitting in our field fund," club treasurer Dean Carman has told the Select Board.

That reflection of residents' generosity is the good news. Another key element is that the funds may not be used for some years. The Arlington High School rebuilding project has put the money's use on hold, town Recreation Director Stacey Mulroy says.

In a telephone interview Oct. 10, Mulroy said that the rebuild project, scheduled to break ground next summer, calls for taking fields around the school out of commission for practice and play. They include the soccer field behind Stop & Shop as well as the softball and baseball fields.

"We can't afford to take a field offline now," she said.

As rebuild work goes on, expected from 2020 to 2024, deciding where a turf field for soccer and other sports remains up in the air.

She pointed to the possibility of a future feasibility study to look at the siting issue.

Carman, a former town treasurer and longtime Finance Committee member, provided some history about the search for a site for another turf field, part from Peirce Field, behind Arlington High, which dates to 2005.

Originally, the soccer club and recreation officials looked at Hurd Field, near Drake Village, but abandoned the idea when the Conservation Commission raised concerns about flooding and the possibility of turf fill being swept into Mill Brook during a once-in-a-generation storm.

"We then looked at widening Hill's Hill from a 9v9 to 11v11 pitch but backed away when we realized how many trees would be cut down to lengthen the field," he wrote. Hill's Hill is the field along Summer Street next Buck Field.

"Our most recent site investigation was when the town manager looked at a Poet's Corner project through a partnership with a local college and the Archdiocese of Boston, but that appears to be cost-prohibitive," he wrote.

Last February, YourArlington reported that Lesley University, already in a partnership with Medford for indoor sports, was seeking a connection to Arlington to see whether it can help expand the town's outdoor offerings.

Town Manager Adam Chapdelaine said at the time that Lesley was looking at helping to pay for a new ball field at Poet's Corner, near St. Camillus, or at Spy Pond Field. Read the story >>

In his Sept. 26 letter to Mulroy, Carman wrote: "Over the last five years, ASC has discussed this partnership with both your predecessors, who were enthusiastic about the proposal but unable to navigate the necessary government boards and commissions. With grass fields in town experiencing more wear and tear because of increased youth sports participation, it remains our hope that this partnership can see its way through the maze of bureaucracy and become a reality for the Arlington community."

In response to follow-up questions, Carman wrote Oct. 6 that the club has been "actively building the Field Fund for eight years. Annually, we budget a $20,000 contribution to the fund, then we appropriate any surplus generate during a given fiscal year.

"Rising school enrollment has lead to a significant increase in youth sports participation, which in turn causes more wear and tear on our multisport fields.

"Arlington Soccer itself has grown by 500 players over the last decade and the fields are in constant use during the fall and spring seasons. If you walk the various Arlington soccer fields this fall, you will see the impact of 1,900 youth players plus two high school programs.

"The addition of a turf field would help limiting the wear and tear on our currently overused fields and allow more participation in youth sports."

This news summary was published Monday, Oct. 14, 2019, and updated to add a caption.