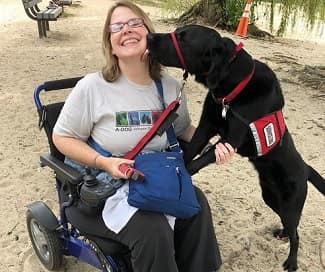 For humans, the Arlington Reservoir closed Aug. 24, but dogs may still have their day -- and they did Saturday, Sept. 8, from 10 to 2.

More than 100 Arlington dogs frolicked and swam at "Dog Days at the Res," an events organized by A-DOG, Arlington dog owners group,  and the town Recreation Department.

Joan Black, an A-DOG officer, declared the day a great success. She noted that all the dogs got along with each other, even when competing for tennis balls thrown in the water. She also commented that the human family members enjoyed themselves, too. Some families arrived without dogs, because they wanted to enjoy seeing and petting the dog visitors.

The organizers suggested a $5 donation per dog to support the Thorndike Dog Park.

Black said the most frequent comment she received was, "Why do we do this only once a year? We would love to have more more dog days at the Res." Perhaps in the future, Arlington's canine residents will be allowed some additional swim days at the Res.

From observing the enthusiastic enjoyment that dogs had swimming, it was clear the dogs would love additional days, too.

One owner reported she did not know her dog could swim until she brought her to the Res for Dog Days and the pooch immediately jumped in and began swimming laps. Two hours later, the owner had a very difficult time persuading the dog to leave the water for the trip home.