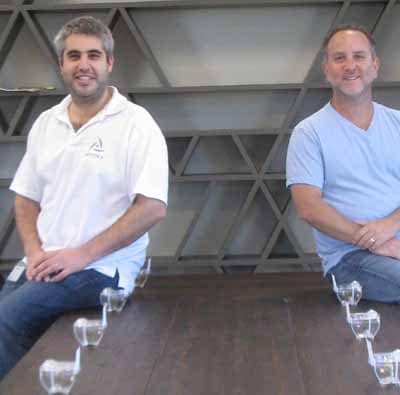 The soft opening was Friday, Oct. 26, with a grand opening expected in November.

"We're excited to be here," said Joseph Lekach, a cofounder of Apothca, which has an outlet in Eugene, Ore., and has opened another in Lynn, at 491 Lynnway. A third store is anticipated in Boston early next year.

Here's what happens when a visitor goes to the third floor of the brick Water Street building. At the door saying Apothca, an employee buzzes you in, and you must provide an ID. If you were a client -- and there had been three by 10:30 a.m. the first day -- you would show a medical-patient card, from the state Department of Public Health. To get that, a patient needs to provide a doctor's note.

At the desk, you sign in. A visitor got a name tag to hang around his neck. A patient would be checked in a database to verify standing and the amount he or she has remaining in a prescription.

Through the door near the sign-in desk, a reporter entered a spacious room that looks like a boutique. On that bright morning, sun streamed through high-arched windows, splashing light over displays of various forms of cannabis from which a patient would choose. Acoustic music played via Spotify.

On the long, dark-wooden table perched rows of small, round containers displaying marijuana, each named and showing the percentage of TAC, or cannabis resin. Each vessel has a magnifying glass, for a close-up look, and air holes, if you want to sniff the product. One called Lemon Jeffrey has 19.7 percent TAC, which Lekach is higher than Vietnam-era weed.

The table held three grades of pot -- sativa ("uplifting in the daytime," Lekach said); indica (for "nighttime relaxation"); and hybrid (which combines qualities of both).

In the middle of the expansive room, two display cases held examples of paraphernalia, edibles and extracts. Some of the pipes and bowls were blown by "Matt 2K Glass," a Boston craftsman.

ACMi takes you inside >>

All new patients that visit an Apothca location in Massachusetts are eligible to received $20 off their purchase of $100 or more on their first two visits. Additionally, Apothca offers all patients half-gram pre-rolls for $8.

Lekach praised town officials who he said brought the business to life here. That includes the town manager, counsel, police chief and those in the Board of Health.

Looking ahead, Lekach said Apothca has applied for a license to have a food truck parked in the lot area on Sundays. Approval for that is awaited.

Some of the varieties displayed were bought wholesale, he said, and some came from Apothca's 26-acre farm. Just off Rt. 2 near Fitchburg, the site began cultivation last April, about the time the company behind facility, the Massachusetts Patient Foundation, took out a building permit for the Water Street office.

In the summer of 2016, Valerio Romano, an attorney for the foundation, said he expected the office to open in July 2017. In August, Romano said that had been delayed until October while the Fitchburg farm got up to speed.

Lekach, who is from Miami and has a degree from Babson, said he sold a company called Dream Water, which promoted a product to aid sleep. "I'm helping people again," he said, referring to how marijuana addresses medical issues.

Apothca is opening three years to the month that the then-selectmen first discussed the issue at any length publicly. A little over a year later, Redevelopment Board approval came. Among those initially concerned were parents and a pediatrician. Now Apothca takes its place with a family medical practice on the first floor and a physical therapy office on the third.

This is Apothca's first medical-marijuana dispensary in Massachusetts.

Recreational marijuana, supported statewide by voters in 2014, is a separate matter. In Arington, a submcommittee is working on rules while a moratorium backed by Town Meeting last spring continues until December. A Dec. 5 Special Town Meeting will address zoning- and tax-related issues.

July 8, 2017: Towns go slow on pot, with Arlington's move among the symbolic

Globe, March 7: If Trump cracks down on pot, where does that leave Mass.?