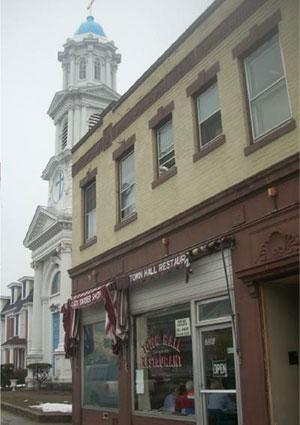 A block with businesses long familiar to Arlington residents is being transformed as a new face in town undergoes some changes of its own. Three businesses across from Town Hall have closed within a short time span to make way for the expansion of the Highrock church, which has seen its attendance increase dramatically. On Dec. 29 the Town Hall restaurant served its last breakfast in its tiny space at 735 Mass. Ave. "It's very sad," said Donna Stathoulopoulos. She and her husband, John, had operated the eatery since September 1986, and the site had been the home of other restaurants long before the Stathoulopoulos family took over. "Families grew up here," she said.

The restaurant's final day took place only a few months after the closing last summer of the Town Hall Barber Shop, whose owner, James McGough, retired. Regal Management has moved to 223 Mass. Ave., not far from the Capitol Theater.

The eatery closed because the couple and church officials could not reach an agreement about the lease, which had been month to month. The couple wanted a long-term lease; the church did not.

The church is using the site of the real estate company for a classroom and for a youth group. The site of McGough's barbershop is now the office of the pastor, David Swaim. The church is uncertain how it will use the space the restaurant has occupied.

The church is "not eager to take over the space," said The Rev. Eugene P. Kim, associate pastor of Highrock. "We were hoping the tenant would stay."

He added: "We have enjoyed their french toast .... We're sad they're going, too."

Whatever the use for a space that has been a place of camaraderie for generations, the closing occurs as the church is growing.

Attendance at Sunday services has grown from 250 when Highrock arrived in town from Davis Square to an estimated 450 participants today. 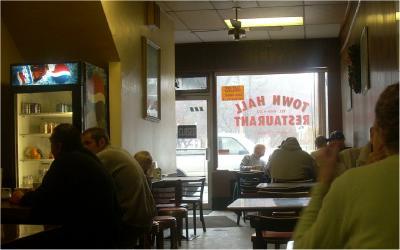 Inside the Town Hall Diner, on its last day.

Highrock bought the properties from St. Athanasius Greek Orthodox Church, a deal completed in the spring of 2005 for an estimated $1.7 million. The Greek church had been a fixture at 735 Mass. Ave. since 1964. After its final service there on Nov. 27, 2005, the congregation moved to the former St. James the Apostle Roman Catholic Church at 4 Appleton.

On the gray morning the restaurant closed, Herb Farnsworth of Arlington, whose son operates the Hometown Garage in Burlington, was among those customers saying their goodbyes. A customer for 30 years, he said the restaurant has been "like a second family" to him. He noted it has long been a favorite gathering place for Arlington senior citizens.

"There had been other restaurants on the site for many years before" 1986, Arlington historian Richard Duffy wrote in an e-mail.

Now the block is becoming a gathering place for the church's faithful.

Kim said the church did not know yet just how the restaurant space would be used. Swaim was unavailable for comment until February.

Whatever the use for a space that has been a place of cameraderie for generations, the closing occurs as the church is growing. 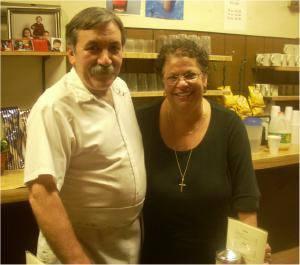 Did not raise rent

After the purchase of the properties in 2005, Highrock did not raise the rent for the restaurant, Kim said. In the block, McGough, honored in November for promoting the works of Arlington sculptor Cyrus Dallin, continued to cut hair -- until poor health pushed him to retire.

Kim said the lease had always been month to month, not long term. "There was no lease to extend," he said. The couple were not able to sell their business with a month-to-month lease, he said.

The Stathoulopouloses, both 60, of Melrose, say they are not ready to retire. "What will you do?" asked a number of customers at the restaurant Dec. 29. They said they did not know.

As one chapter ends, another begins.

Highrock, whose name comes from the Needham street where the congregation started in 1999, "began a new chapter in its history," its Web site says. "We who call Highrock our home are looking for the ways in which God will work through us to minister to the town of Arlington, where we can be a reflection of and point others towards Christ."

The nature of the congregation, at first titled toward those of Asian descent, is now "pretty ethnically diverse," Kim said.

Highrock's aim from the beginning, Kim said, is to be a "local church with roots in the community -- a positive presence."

Asked what programs the church has established to pursue that aim, Kim named two:

-- Church members collect leftover bread from Panera in the Heights and distributes it to Menotomy Manor and Winslow Towers. In connection with this effort, the church has established a partnership with Arlington High School. As part of their community-service requirement, students wrap bread bread in the cafeteria once a week. Kim said the effort began with AHS students who were sent to detention.

-- A series of benefit concerts raised $5,000 for the Arlington Food Pantry during three nights in December at the church, and 700 people attended.

In addition, Kim said the church's health ministry tries to find ways to bring health services to the community. He said the church had expansive plans when it opened, but with state health-insurance reform covering a number of health issues Highrock wanted to address, it has had to scale back plans.

"We look for a community need and try to fill it," he said, citing a blood drive.

Highrock is allied with the Evangelical Covenant Church, a evangelical branch that is not part of mainstream Protestant denominations.

Evangelicalism is typified by an emphasis on evangelism, and by what adherents call a "personal experience" of  conversion, described in the Gospels by Jesus as being "born again."

"We are committed to reaching the unchurched, particularly the emerging generation pressing forward in ethnic ministry and diversity extending greater measures of compassion and justice to the poor and desperate, attending to the health of existing congregations forming spiritually mature disciples who live out obedience to Christ in the world, calling forth and equipping women and men for all levels of church leadership, pursuing expanded strategic global opportunities and partnerships."

Apart from these larger spiritual themes, the Highrock staff knows what may connect to young people. Kim has a MySpace page at www.myspace.com/eugenepkim, where you can hear him play guitar and sing songs he has written at Highrock. One is "We Need You, Lord."

While some longtime Arlingtonians seek a new place to meet, others may have one at Highrock.