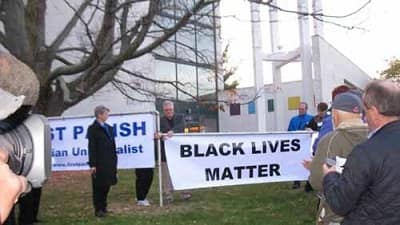 With a TV camera and participants, the Rev. Marta Flanagan, left, watches as new banner is installed at First Parish on Oct. 27.

The echoes of the phrase, repeated among an estimated 60 people gathered beneath a giant tree, went beyond Mass. Ave. and Pleasant, as other Arlington religious institutions expressed their support.

Listed as supporters in a handout provided by First Parish are clergy and members from the Bethany House of Prayer, Calvary United Methodist Church, Church of Our Savior (Episcopalian) and Park Avenue Congregational Church.

In an act that supporters said was vandalism, occurring between Oct. 17 or 18, the sign had the word "black" whited out with spray paint and its metal frame bent.

The Rev. Marta Morris Flanagan, minister at First Parish, told those gathered Oct. 27 that she was making a "plea for understanding about why we must say 'black lives matter.'"

As she spoke, her comments repeated "black lives matter," as if to reassert its whited-out image.

She said she was making a "plea for understanding about why we must say the three words.

She asked those present to say aloud a name of someone who has experienced events that give meaning to the phrase. A cascade of names followed.

"We are not alone," said said.

"They have changed us, and through them we are changed."

The phrase, she said "means just that.

"We don't need to be reminded that white lives matter," she told the nearly all-white audience. The exception was a black TV camera man.

At this, other members of the audience added their voices, heard via an amplifier, with examples of institutional racism.

One called out statistics suggesting the disparity of responses from potential employers from resumes with white- or black-sounding names.

The system and minds that need to be changed are "desperately needed," Flanagan said.

A recounting of some history

Lori Kenschaft, the clerk at First Parish, summarized the history of the banner, calling it an object of social witness.

A month after the shooting of Michael Brown in suburban St. Louis in August 2014, First Parish held a successful rally of support. Parishioners, wanting to know how to follow up that energy, decided on a banner.

The 3- by 9-foot banner was first installed last January, soon after the rally that drew 400 to Arlington Center. The banner was damaged by harsh winter weather and was restored. It was kept up periodically, depending on messages that the church wanted to convey.

The Globe reported that churches around greater Boston, including in Somerville and Bedford, have put up similar signs.

Other signs have appeared at the site since the summer, but the parish decided Oct. 9 that the "black lives matter" should return.

Last Sunday, the Rev. Paul Robeson Ford, senior pastor the Union Baptist Church in Cambridge, spoke powerfully at First Parish and had firm advice: "Put it back up," he said.

Kenschaft said the sermon brought the congregation to its feet at its conclusion. "The congregation broke into applause three times during the sermon," she wrote, "including when he told us to put the banner back up, and if it is vandalized again put it back up."

"Free speech is an important constitutional right, and we will go to extreme measures to protect people’s rights to free speech," he told The Globe.

As traffic continued to pass and the sun set, a guitarist led those assembled in singing "One More Step" by Joyce Poley: