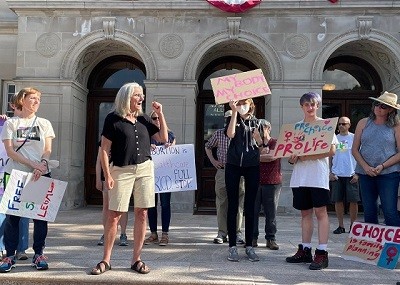 UPDATED July 1: "I am a woman, and I am pissed," said Sen. Cindy Friedman, Democrat of Arlington, at a rally in front of Town Hall on Friday, June 24.

She addressed an estimated 200 people gathered to protest the U.S. Supreme Court ruling that ended constitutional protections for abortion. These had been in place since Jan. 22, 1973, before a decision Friday by the current court's conservative majority to overturn Roe v. Wade. The ruling is expected to lead to abortion bans in roughly half the states.

In anticipation of this decision, Mystic Valley Action for Choice, a grassroots group that works to take action and provide education in support of reproductive access and rights, planned the rally, "Stand Up and Stand Together," at on the steps of Town Hall.

Joining the group were members of the Town Democratic Committee. Those taking part moved to Mass. Ave. and Pleasant after gathering at Town Hall. Adding his voice was state Rep. Sean Garballey.

As town residents held signs, horns from passing cars blared as drivers signaled support. However, one driver in a pickup truck dissented, calling from his cab, "Ya lost!"

The Supreme Court decision stunned a nation and will undoubtedly affect the upcoming primaries and the ’24 general election. The high court ruled 6 to 3 to overturn Roe v. Wade, the landmark ruling that established the constitutional right to abortion. In Arlington, the reaction was quick and visceral, as ACMi News Director Jeff Barndt reports:

Those who planned Friday's action had expected the highest court to decide against Jackson Women’s Health Organization v. Dobbs after a leaked draft of an opinion from Justice Samuel Alito took a strong stance against abortion rights.

The overturning of Roe v. Wade is the first time in U.S. history that a right established by the U.S. Supreme Court has been reversed.

In an earlier statement, the group said: "This means that the national right to abortion care will no longer be affirmed through the Constitution. As soon as the decision is issued, over 20 states are poised to severely limit or outright ban access to abortion care. This decision could also seriously curtail other rights based on a constitutional right to privacy. This could include same-sex marriage and gender-affirming health care services."

Mystic Valley Action for Choice urged the public: "Bring your friends, your signs, your pussy hats. All are welcome."

Questions? Contact June Rowe at This email address is being protected from spambots. You need JavaScript enabled to view it. or Linda Hanson at lhanson at rcn.com.

In a statement earlier that day, Friedman spoke out Friday morning against the Supreme Court decision.

Although Massachusetts is one of 14 states, plus the District of Columbia, with laws in place protecting the right to an abortion, the procedure will likely be nearly impossible to get in about half of U.S. states, including large swaths of the South, Midwest and Northern Plains.

"While not shocking, today's decision by the Supreme Court to strike down Roe v. Wade is completely devastating and marks one of the darkest days in the history of our government," Friedman said in a tweet. When will the attacks on women end?"

The Supreme Court decision was released Friday, more than a month after a draft of the opinion by Justice Samuel Alito leaked.

The state Senate voted in May to adopt an amendment that provides enhanced protections for reproductive and gender-affirming health care in the state, including abortion procedures. The amendment also protects out-of-state residents who travel to Massachusetts for such services.

This news announcement was published Friday, June 24, 2022, and was updated June 25, with new copy and a photo, as well as July 1, with an ACMi video.