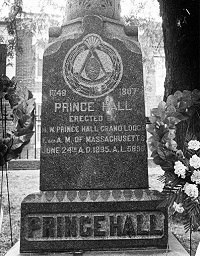 Declared by the Select Board in 2021 and voted on by Town Meeting that year, the first Prince Hall Day event was held.

They came together to honor an 18th-century patriot, abolitionist, organizer, educator, advocate and Mason.

“And Prince Hall was the first person to use the language of the Declaration of Independence for a reason other than war with England.  For more information about Prince Hall see Danielle Allen's 2021 article in The Atlantic >> and the WGBH video, below.

Those involved gathered on the 225th anniversary of the day on which Prince Hall gave an address to his African Lodge, considered the first official black institution in the U.S. Titled “A Charge,” it was delivered at Menotomy, as Arlington was known, on June 24, 1797.

WGBH video: 'Who was Prince Hall?'

Melofchik opened the program with brief remarks relating Hall's accomplishments and his relevance today during a period of global strife and national discord. After a land acknowledgment was given by Arlington Human Rights Commissioner Melanie Brown, six community members from Arlington read the 18th-century text.

Asked about the location of the event, Melofchik wrote: “Town Hall plaza:  a good central location.”

Asked about personal interest in Hall, she wrote: 'This is important history that deserves to be more widely known.”

The Prince Hall Circle looks forward to future events familiarizing the community with the accomplishments of this Revolutionary-era community leader whose roots are in the Colonial era of Arlington and the nation.

The event followed a protest at Town Hall and in the Center of the U.S. Supreme Court decision overturning Roe v. Wade, the 1973 ruling supporting abortion rights.

This news announcement was published Thursday, June 23, 2022, and updated June 29, as well as Aug. 25, to report new audience count. The report was based on information provided by town resident Beth Melofchik and additions by Bob Sprague, who edited it.