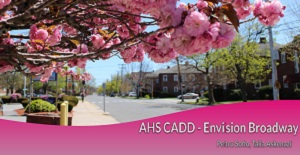 UPDATED July 12: How might East Arlington's Broadway find a fresher shape – even if it is not the grand vision its New York City counterpart suggests. Envision Arlington's Civic Engagement Group offered a competition this spring, and the winners are in. See them here >>

Among them is one by Arlington High School computer-aided design students Petru Sofio and Talia Askenazi and their "Envision Broadway." See their slides here >>

This was an opportunity for designers, architects, visionaries and planners to have some fun exercising creativity to leapfrog into the postpandemic future and create a 2040 and after vision of what the built environment of a specific neighborhood – the Broadway corridor area -- might look like.

In addition to the AHS students were East Arlington Complete Neighborhood by MIT Department of Urban Studies and Planning (Jay Maddox, Shannon Hasenfratz and Daniel Pratama) and Redefining the Broadway Corridor: A 2040+ Vision by Winslow Architects (John Winslow, Phil Reville and Dolapo Beckley.

Len Diggins is the host and cochair of the Civic Engagement Group, and Barbara Thornton organized the effort.

Thornton explained that at the 2021 Town Meeting, members voted to support her resolution to conduct a “design competition” for the town.

She said that she wanted to try to shift the conversation from the immediate battles over short-term, specific zoning decisions “to see if we could find some common ground on the broader issues in a more distant future time horizon.”

The categories of issues may be the same -- transit, sustainability, affordability, etc. – “but when you project your vision out from next year to 2040 and beyond, the potential solutions can be radically unexpected,” she said.

“At minimum, the fear of immediate change is removed.

“I’m really excited to have Arlingtonians see these alternative visions of our town. I very much hope the will lay the groundwork for more 'brainstorming,' more visions, about what our future built environment should look like.”

Like many municipalities across the nation, residents of Arlington are struggling to determine how to shape their community’s built environment in the face of high housing costs, climate change pressures, new sources of energy, desires for safe, walkable streets, for economically healthy main street stores and cafes, and efficient transit modes and for open space and recreation opportunities.  The struggle usually gets played out in zoning board meetings.

With the help of the Boston Society of Architects and faculty in the region’s plentiful university departments specializing in art, architecture, design and planning, teams entered the competition to offer visions of what a particular neighborhood in Arlington might look like in 2042, 20 years into the future.  The Broadway Corridor area includes single and multifamily housing, a major bus route, Arlington Housing Authority property, a small commercial district, an elementary school and a park.

Quotes from the judges:

The competition was advertised March 8 and  ended May 20.